A canopy of sheltering arrows almost seemed appealing on descending the (surprisingly small) Kolonos Hill as the mercury hit 37! 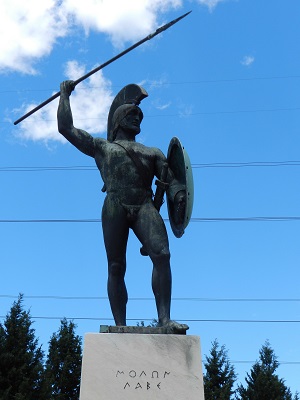 Having listened to a Student Lecture beside the Monuments (Fig 1), we took respite within the Educational Centre. Two short 3D film presentations explained the significance of the Site and the disappearance of shore line to those whose knowledge is limited to that of the Silver Screen. The large interactive ‘tables’ provided more detailed information about everything from armour, contemporary politics, naval and maritime battle formations to the influence of Thermopylae upon modern literature and the significance of “ΜΟΛΩΝ ΛΑΒΕ”. The site is no more merely a dusty motorway lay-by……. 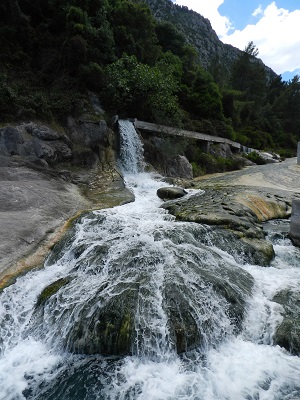 The Thermal Springs (Fig 2) themselves (though fallen into disrepair) did offer shelter – but pick your picnic spot upwind! 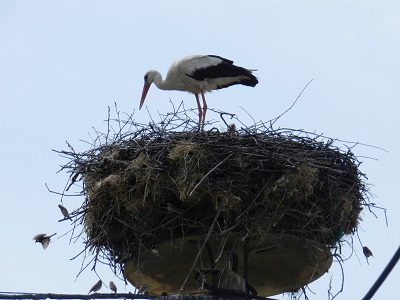 The landscape became ever more verdant as we travelled north, often hugging the shore line and revealing some rather unusual sights – nesting storks feeding their young (Fig 3) and an aeroplane (Fig 4) deliberately perched upon a café roof!

Meteora is geographically, positively stunning and defies description. (Fig 5) However, the Byzantine Church of Dormition in Kalambaka offered the best frescoes (and black humour) that we have ever seen. Built of Roman masonry (Caesar stopped here en route to Philippi), the interior is breathtaking. (Fig 6) 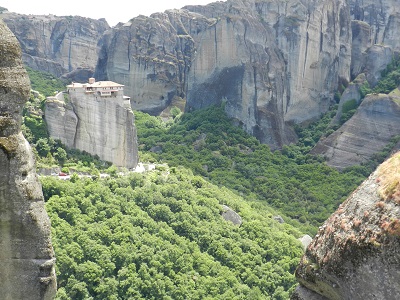 We feasted royally on grilled lamb chops, steak and fassolakia on the Plataea at “Archontariki” watching local politicians make promises and children play amid a passionate but well behaved crowd……….and listened to enlivened debate as families came inside to dine. If you don’t eat at Hotel Orpheus in Kalambaka, do so in this Taverna run by two young couples. We chanced upon it, we returned – and will do so again. Excellent local, home cooked fare! 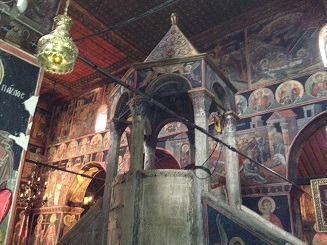 The outdoor Market is pretty good too! (Fig 7) 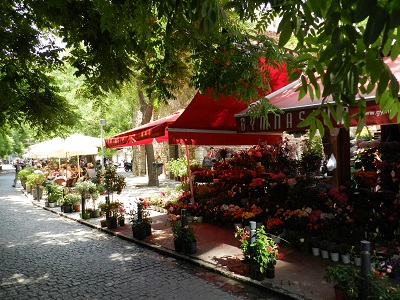 Our next potential Hotel (although popular with holidaymakers) did not come up to the standards expected by our customers. The owners were charming but sadly we pressed on………to discover the charming fishing village of Makrygialos near Ancient Pydna, where Philip II reputedly lost his eye (few remains, look in local housing!). Hotel Achilleas offered a clean spacious, double en suite with sea view, less than sixty seconds from the beach; a perfect stop for those wishing to ‘get off the beaten track’. Fortified by ξενοφιλία, excellent sea food and a breakfast of homemade bougatsa we set off for Dion. 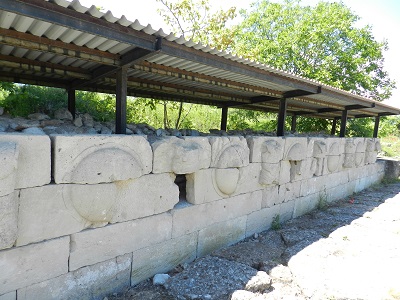 Ancient Dion is spread over two sites, the Archaeological Museum (with Hydraulic Organ) in the centre of the village. The huge Site not only offers some exceptional archaeology (Fig 8) but is also a wildlife haven with viewing platforms and fauna and flora educational notice boards. 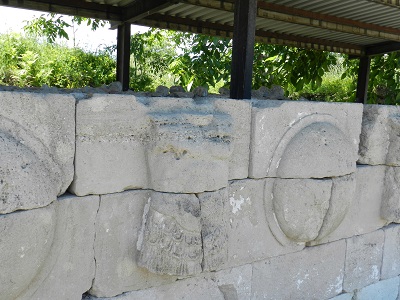 In Vergina we stayed the Boutique Hotel “Evridiki” (B+B, Wi Fi, TV, twin room, air con, fridge, balcony) set amongst olive groves. The original Taverna has been extended to include a café, bar and eight beautifully decorated bedrooms. A mere stone’s throw from the Theatre, (site of Philip’s assassination), City Walls and Tombs it is no wonder Andronikos was an habitué. He probably imbibed on the home made Tsiporo as well! 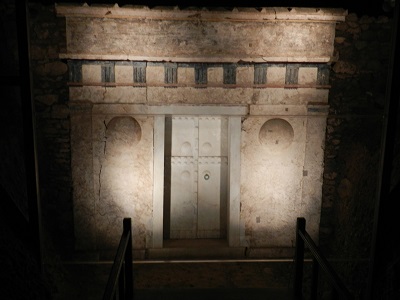 Philip’s Tomb and Persephone Abduction Fresco is a marvel. (Fig 9) The original Toumba incorporates the museum – all artefacts dramatically spot lit in otherwise pitch darkness. The effect is breathtakingly dramatic! 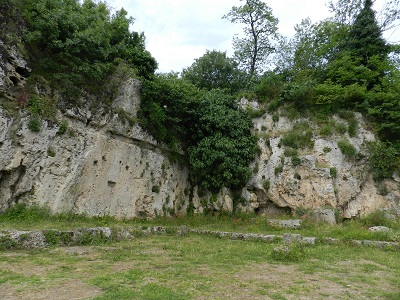 A very patient, local secondary school master took time away from his pupils to direct us above modern Isvoria to the School of Aristotle where the young Alexander was educated. Here we sat in a leafy glade listening to birdsong beside the Stoa, Nymphaion and gushing river. (Fig 10) 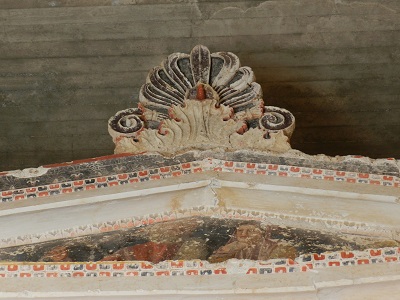 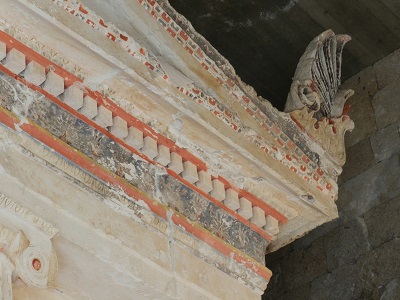 The Theatre and Macedonian Tombs at Ancient Mieza have been closed to the public for many years. By sheer luck we turned off on a dirt track, behind a slow moving horse and cart to discover workmen in situ – from whom I begged a peek. With much gravitas we were permitted a view of the pronaos – the colours were astounding! (Figs 11&12) This area will make a superb addition to a School Tour when renovations are complete in two to three years. We left behind a kilo or so of local organic cherries as a token of our thanks and appreciation. 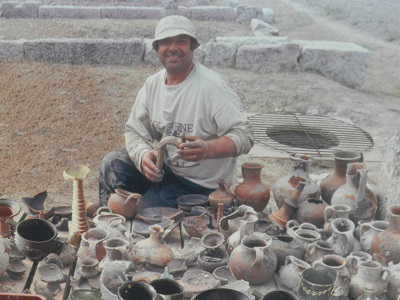 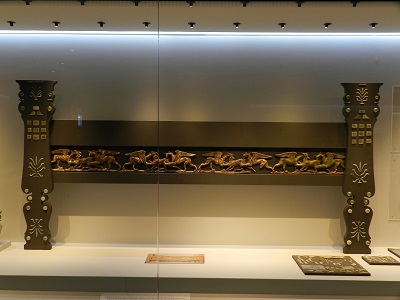 We entered bustling Thessaloniki in trepidation having spent so many days in the country side. Hotel Vergina gave us a fantastic welcome and passed H&S with flying colours (plus large meeting rooms with power point). Within walking distance of the Archaeological Museum, White Tower, Triumphal Arch (Fig 15), Rotunda and Agora (Fig 16) it is also a short stroll from the Flower Market (Fig 17) and seafront – perfect for an after dinner recce either watching the fairy lit boats cruising around the bay, or embarking as the cost is simply that of one soft drink pp! 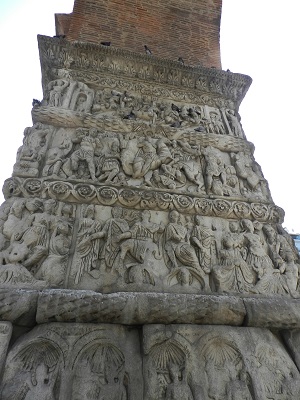 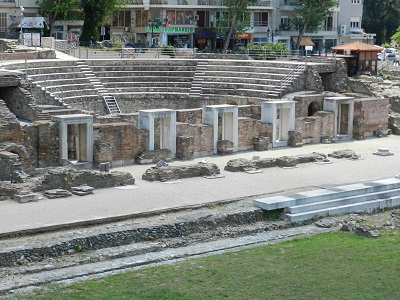 Also staying at the Hotel on a “Footsteps of St Paul” Trip (click here for Itinerary) was one of our most popular Coach Drivers – Dimitri from Argos!  (Fig 18) As it was the Name Day of his father Dinos (a friend of many years standing who once took great care of me when I succumbed to bronchitis in Corinth!) we spoke on the ‘phone and sent gifts onwards with his son. 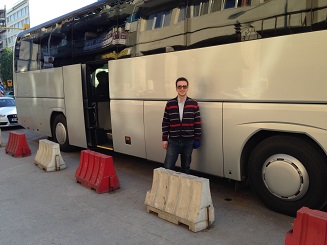 Finally, we like to take this opportunity of introducing you to Myrto (Fig 19; daughter of Yianni whom so many of you praised on your last visit) on Courier Duty at Aphaea – start ‘em young we say! 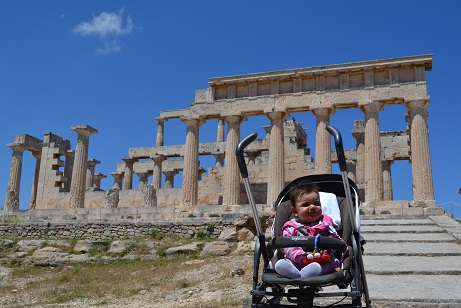