Albania – An unfairly overlooked land of Illyrians, Greeks, Romans, Byzantines and Ottomans. Visit it before everyone else does! 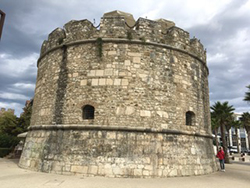 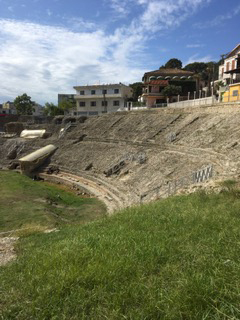 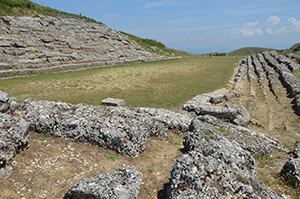 Fabulous drive south on excellent roads passing the promontory site of Pompey’s military Camp and stunning coastal scenery.
Hellenistic Amantia; claiming Euboean origins in order to qualify for the Pythian Games and siding with Caesar during the Civil War, it maintains a position of remote isolation amid agricultural land.
The Stadium remains are impressive – as is the hike to the Akropolis.
You will be escorted by either a young farmer or his father to the 5 agricultural homesteads in various states of repair, set within the archaeology of two Temples, circuit walls and gateways. Do not expect the splendours of Athens or Rome, do expect stunning view, narrow paths and dung heaps shored by with pottery sherds.
Lunch en route on the spectacular Adriatic Coast continues…with more goats.
Hotel and Evening Meal at Hamare, a Greek enclave and small fishing village 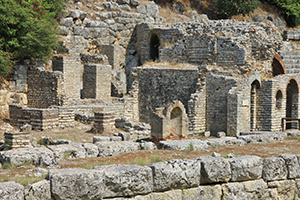 Bouthroton/Butrint; a major Chaonian Epirote Centre & Corinthian/Corcyraean Cleruchy C10th BC and according to Virgil, traditionally founded by Helenus, son of King Priam, Neoptolemus & Andromache according to Virgil.
Don’t be offput by the throngs of Tourists, the site is so large, that once past the car/coach park…they vanish!
An easily followed route takes you past Asklepion, Theatre (with Slave emancipation epigraphy), Agora, Gymnaseum, Roman Villa, Exedera and Great Basilica across the lagoon from which lies remains of the Villa of long suffering Atticus, friend of Cicero.
The Circuit Walls are extraordinary; Archaic, Mediaeval, Ashlar, Polygonal, Drafted Margins (one amazing gateway inspires comparison to the Scaean Gate of Troy), Pyrrhic Gateway and a reused Archaic relief of a Lion eating a Bulls Head.
The small Archaeological Museum contains a lovely unfinished togate in a small courtyard, good selection of Roman Sculpture within, including a mention of Cicero and Atticus.
Lunch en route or on Site
Inland detour to the Theatre of Hadrianopolis, built atop an as yet, unidentified Greek circular structure. 1klm walk from a bridge too low for a coach, in all likelihood you will be alone bar a large herd of goats.
Hotel and Evening Meal in the UNESCO Mountain Village of Gjirokastra. Originally C4th AD (Akropolis later housing a notorious prison) in 1336 it was named Argyrokastro. Conquered by the Ottomans in 1417 it changed hands many times during WWII. 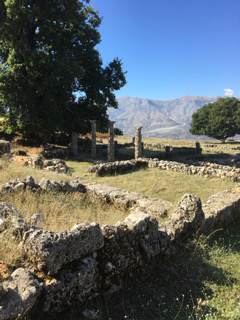 We spend the morning walking Antigonea. Built by King Pyrrhus named it after his 1st wife Antigone. Thanks to Roman incursions it is now more mountain park with scattered archaeology than archaeological park with stunning mountain views. What is there however, is good – and it’s a must for any Trip. Take a picnic. 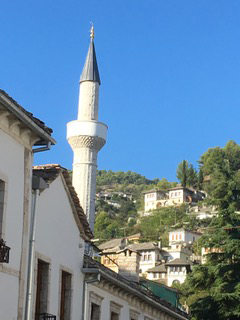 Afternoon to explore Gjirokaster Castle. Originally an Ancient Akropolis, later an Ottoman Fortress and 1930s Prison, it is brooding and oppressive although with spectacular views. The Museums within contain ancient artefacts from Antigonea, Hadrianopolis and an array of weapons from ancient Illyrian to WWII.
Gjirokastra Hotel and Evening Meal 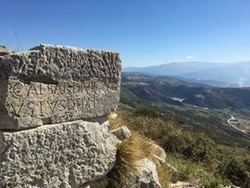 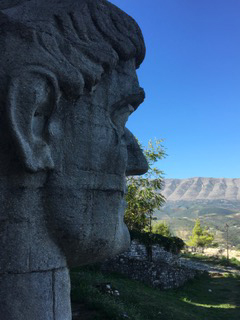 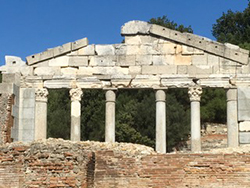 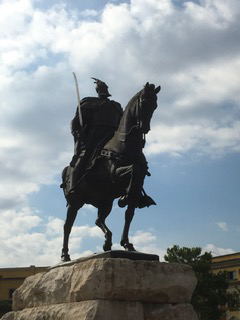 Both Archaeological Museums are a must – anything else is a bonus!
Ancient Pavilion Rooms of the Tirana History Museum exhibit a vast collection of exhibits ranging from Paleolithic to Paleo Christian. Walk beneath a huge Copper replica of a C3rd BC Illyrian Belt Buckle engraved with Infantry, Cavalry and Dragon Legend of Cadmus to view mosaics, stunning Gladiator Relief , Illyrian Bronze Weapons & Iron Chain Mail, Hand of Sabazius, vast ceramic collection.
The National Museum of Archaeology was the first Museum in Albania founded after WWII and is affiliated to the Academy of Science. Not as modern, laid out, labelled or well-lit as others, it has a charm all of its own and contains some surprises such as an exquisite Archaic Statuette and a laughing Roman Slave taking sanctuary upon an altar.
Transfer to Tirana Airport for UK Flight 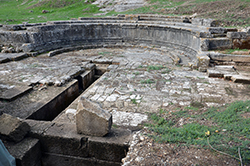 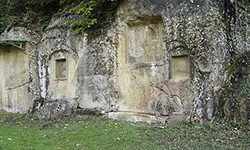