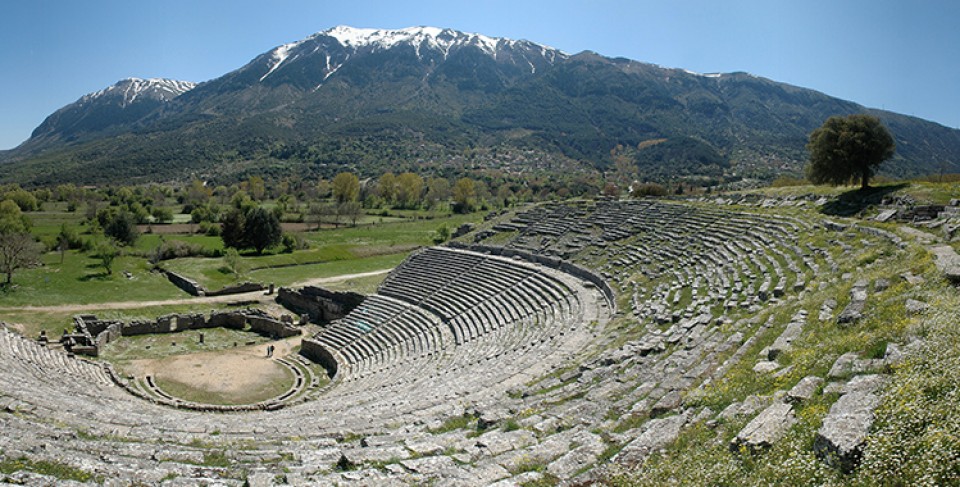 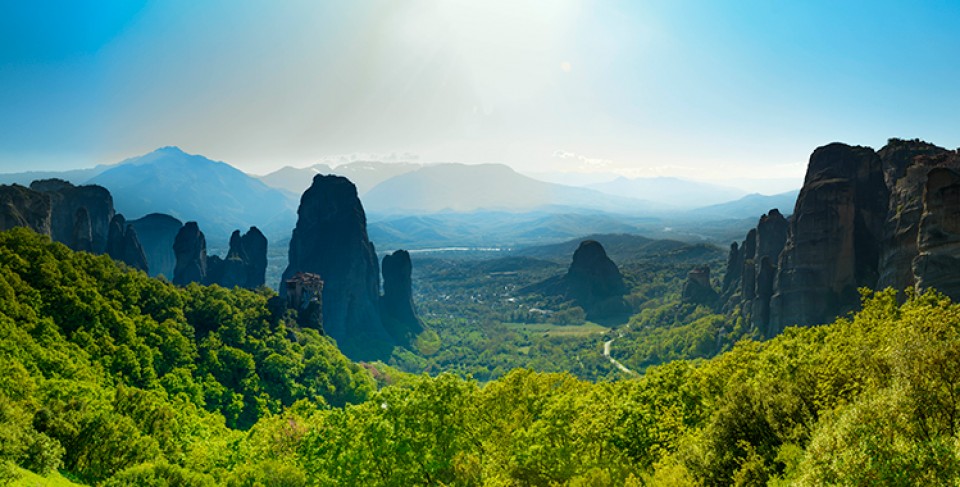 Epirus and Thesprotia. Octavian, Zeus at Dodona, Theatres, the River Acheron and the Oracle to the Dead!

Sample Itinerary
All Itineraries are tailor-made to suit the specific requirements of syllabus, budget and stamina. If you require a quotation, please send us your wish list!

< The Bridge of Arta 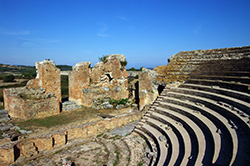 Nikopolis, the Trophe City built by Octavian to celebrate his Victory over Antony and Cleopatra; the once vast City is spread over a huge area, several separate sites, cross-sectioned by roads, farms and a separate village.
Gateway and impressive fortifications, beautiful Mosaics from early Christian Basilica, Decumanus Maximus, early Christian Fortifications, Theatre of Octavian Stadium (first monument of Octavian’s victory building scheme for celebration of the Actia, quinquennial games in honour of Apollo) and remaining terraces of Victory Trophe overlooking the Bay of Actium.
The role of Agrippa is acknowledged in the small, but classy Archaeological Museum on the outskirts of town.
Hotel and Evening Meal at Preveza
Evening to explore the Yachting Marina, seafront, quaint back streets and cafes serving lots of pastries and ice cream! 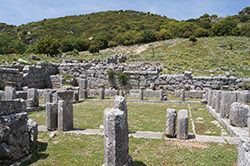 Zalongo Monument; climb the 400+ steps to the 1961 monumental sculpture commemorating the Dance of Zalongo and the heroic grandmothers, mothers and daughters of Souli who danced off the mountain, to their death, in the face of Ottoman advance. 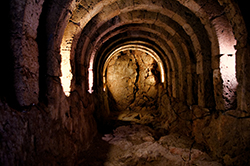 Hellenistic Kassope (entrance courtesy of BSA): dominates the plain at an altitude of 650m. Reached via a Pine Forest path, the City once boasted its own Mint, Agora, Prytaneum, two Theatres, Xenon and Temple to Aphrodite. Subdued by the Romans in 168BC its eventual demise, as were so many towns and cities, was the battle of Actium and compulsory resettlement into Nikopolis. Today the highlights are the polygonal walls, Agora and views, Xenon (if indeed that is what it is) and Large Theatre. 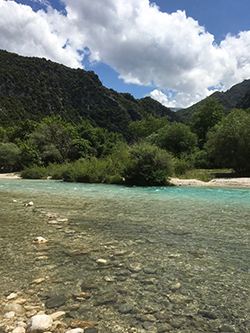 Lunch at one of the many Tavernas on the River Acheron and an opportunity to paddle.
The Nekromateion of Ephyra retains an aura of mystery. Information Boards instruct, the chapel hosts an informative exhibition……..but the nervous laughter of visitors descending the metal staircase into the subterranean cavern proves the magic endures!
Dormitories for ancient Pilgrims, a purificatory pit, Labyrinth of black polygonal masonry, multiple querns– all bring to mind the possible use of grain and ergot at Eleusis. Fasting and sensory deprivation would have heightened the illusion created by ancient puppeteers by ancient torchlight.  Is this what happened at Cumae?
Time for ice cream and souvenirs in the adjacent village before Hotel and Evening Meal at Paramythia, a toiwn reminiscent of a pre-gentrified Arachova. 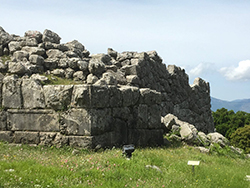 Elea (courtesy of BSA): another Octavian reduced Hellenistic City set on an impressive plateau. Originally administering the Nekromateion it suffered the same fate as Kassope and over 70 other settlements. The monumental black polygonal circuit walls are breathtaking, the interior somewhat overgrown but pathways are clear and the viewing platform offers unrivalled views. Agora, housing, domestic terracotta hip baths, temple foundations, stoa, terracing, water system and aqueducts. You will have it all to yourselves.
Head inland and join the Via Ignatia for lunch at a Taverna with views of the Theatre of Dodona in the distance. 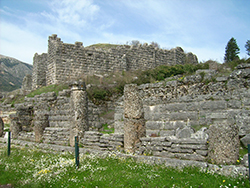 The Temenos of Dodona has undergone much excavation and restoration. In addition to the ubiquitous Information Boards there is even an electronic interactive Information Station, with flashing lights and buttons!
Dodona was, and should be again, much more than ‘just the theatre’ no matter how spectacular a theatre it may be. 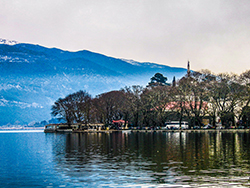 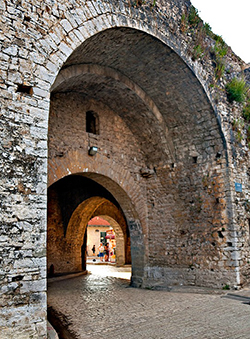 Traditionally founded by Emperor Justinian, Ioannina provided refuge to many Byzantines fleeing Constantinople, surrendered to the Ottomans in 1430 and was not ceded to Greece until 1913!
A lovely city, circled by snow-capped mountains even in high Summer and overlooking a wide lake, the city doesn’t feel Greek. 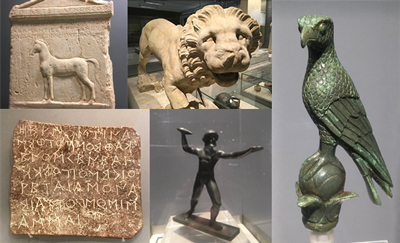 Visit Byzantine Churches, Mosques, trendy cafes and restaurants, pedestrianised cobbled back streets, Mediaeval Fort and Archaeological Museum set along the lake shore in a huge Plaza with herb garden.
Exhibits are displayed geographically, not chronologically across the whole region but the most interesting and plaintive section however is the room of Oracular Consultation at Dodona.
Visit the Aslan Pasha Mosque before taking a boat ride across the vast lake to the small Island of Nisaki, the Ali Pasha Museum, Restaurants, Tourists shops and Orthodox Churches.
Ioannina Hotel and Evening Meal 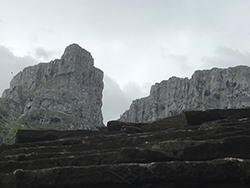 Full Day excursion into the Vikos Gorge and the two granite built, isolated villages of Megalo and Mikro Papingo, the latter only accessible on foot.
Isolated Monasteries, vast canyons, opportunities for pony trekking and white-water rafting, hiking and nature watching, swimming in mountain pools
The scenery is stupendous. Perhaps, like us, you too will spot an Eagle flying overhead – a snake clutched between its talons.
Ioannina Hotel and Evening Meal

Morning in Ioannina for additional Museums, Churches, Tomb of Ali Pasha before heading back to Preveza via Orraon.
Despite its tiny size and already having lost its walls in 167BC it was one of four final pockets of resistance against the Romans.
Somewhat neglected and overgrown but none the less glorious for that, in all probability you will have the place to yourselves – yes, you can see Ithaki!
Hotel and Evening Meal at Preveza 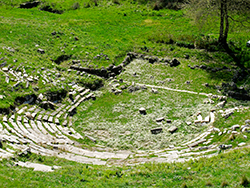 Add Gitana /Gitana, Theatre open only by arrangement, Monday- Friday 9:00-14:00 with the Ephorate of Antiquities, BSA and Hellene School Travel 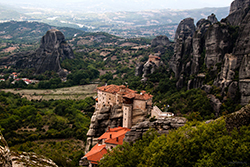 Add Meteora (two hours from Ioannina) and fly out of Saloniki (3hrs Transfer) or Athens (4hrs Transfer) via Thermopylae and Cape Sounion
For those wanting Outward Bound, the area offers superb opportunities for Sailing, Camping, Kayaking and Hiking.

Archaeological Museum of Karditsa: one of the finest collections and presentations of ceramics in Thessaly + spectacular Bronze Cult Statue from the archaic Temple of Apollo at Metropolis

Blogs:
A Week In Epirus, a serious option for Schools