A Classics Trip to Russia?!

Mention a school trip to Russia and one usually thinks of the History department; Tsars, Napoleon, revolutions and the Cold War. However, thanks to Catherine II and Peter I (avid collectors of all things European) the country boasts not only an impressive collection of Neo Classical Architecture, but also of Greek and Roman, Hittite and Persian, Naukratis, Black Sea and Scythian archaeology. Lenin, having studied Greek and Latin before concentrating on law, wrote extensively on Greek Philosophy, considered Dialectical Materialism as a revolutionary tool and has been seen by some as a Philosopher King!

Forget any negative preconceptions you may have read about visiting Russia. The people are extremely welcoming (if you are prepared to make an effort!), it’s spotlessly clean (no litter, dog mess, chewing gum, little graffiti – even free public conveniences in public parks were spotless), the food is of a high standard (varied and inexpensive), the security second to none (scanners and luggage x-ray before entry to airports, railway stations, shopping malls, department stores and museums). It may be inconvenient for individuals to travel from London, Edinburgh or Manchester for visa formalities, but for schools there may be the option of the biometric visa van coming to you! 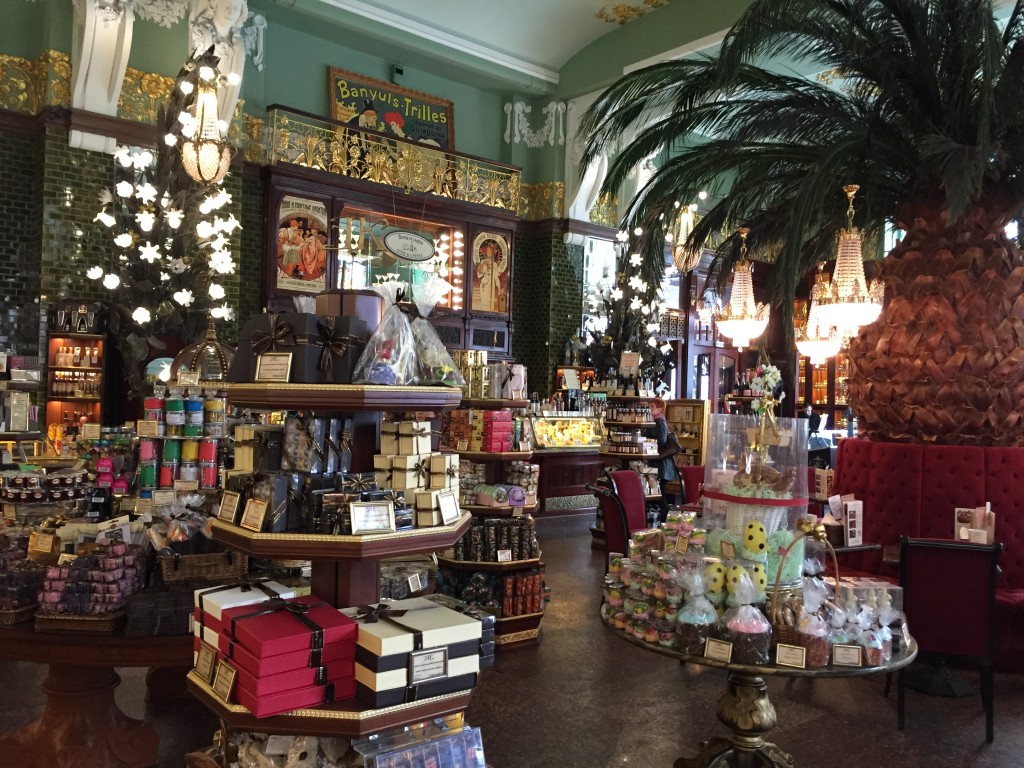 Moscow expanded concentrically from the early Iron Age culture based in the area of what now is the Kremlin Citadel. Consequently, architecture is hugely varied and street plans interestingly random within its historic quarters.

The Palaces of the Kremlin Citadel, stunning Orthodox Cathedrals, concert hall, Ivan the Great Campanile and gardens are enclosed by the famously atmospheric red walls and arsenal towers. Gold rooftops gleam, white limestone lattice work shimmers and green ceramic tiling virtually glows. Beneath, in the tranquil Alexander Gardens are both the Tomb of the Unknown Soldier and the ‘ruined grotto’ constructed from masonry remains of the 1812 Invasion with Doric colonnade; wrought iron gates are decorated with Roman Fasces. Red Square is enclosed by Lenin’s Mausoleum, GUM and St Basils (interior largely stripped). The C16th Resurrection Gate and Iveron Chapel lead through to Revolution Square and the Lenin Museum, Bolshoi and open air markets with street food vendors – licensed of course! The adjacent State History Museum houses a fine Palaeolithic to Bronze Age collection from Siberia, Georgia, Panticapaeum (Crimea), Olvia (Ukraine), Tauric Chersonese. Highlights are the C2BC Aphrodite of Taman (Sea of Azov) and Turmanskiy Sarcophagus (an Hellenic and Chinese composite). 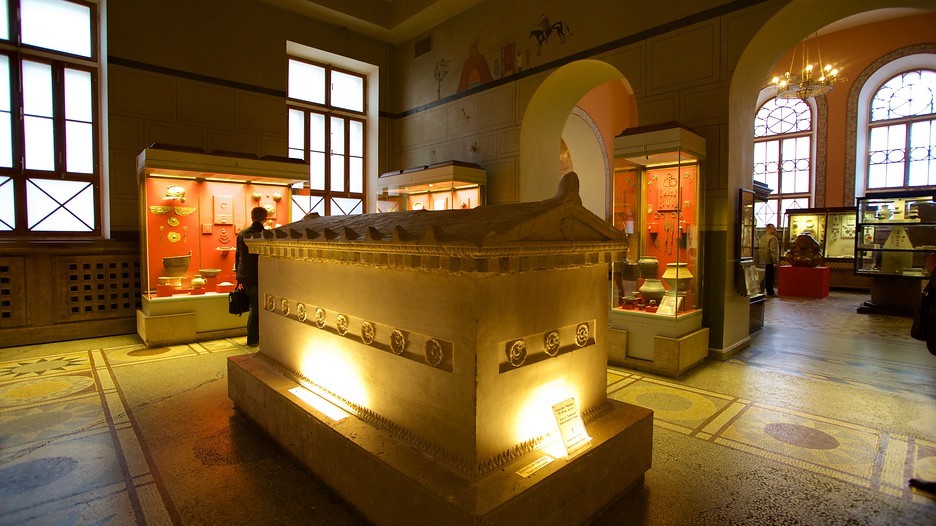 The Pushkin Museum is the repository of Priam’s Gold. Whilst the Ionic façade conceals a reproduction Panathenaic Frieze, the vestibule reveals a monumental Ionic staircase. The effect is quite breath-taking. Not all of Schliemann’s Treasure is on display but in addition to the famous headdresses are the rock crystal magnifying lenses, amber jewellery, lapis lazuli ceremonial axe heads, several interactive screens explaining the Hissarlik excavations and ancient Greek daily life. Elsewhere are displayed Hittite and Mycenaean artefacts, a vast array of Greek Ceramics (Villa Giulia Painter Hermes with infant Dionysus, Andokides Painter Bilingual Herakles with two headed Cerberus) and several cast galleries which know no bounds – full size Erechtheion Porch or Olympia East Pediment anyone?!?!

The Ryabushinsky Mansion provided a welcome respite after such an aesthetic onslaught. An extravaganza of Art Nouveau, almost a living being in itself (the beauty of the staircase will make you weep) it was gifted to Maxim Gorky in 1931 on his return from exile. Having lived in Naples and Capri the walls are adorned with watercolours of the Bay of Sorrento. Indeed, he was twice visited by Lenin and they toured Pompeii, Vesuvius and the Naples Archaeological Museum together. Somewhat of a Roman history expert, Lenin spoke Italian, Gorky did not. Lenin refused to engage in philosophical discussion with his host, stating that it was a tool for action and not to be frittered way.

At the confluence of the Moskva River and the Vodootvodny Canal lies the 98m high statue of Peter the Great. The nearby Graveyard of Fallen Heroes (an open air museum for discarded Soviet Statuary) is perfect for peripatetic dialectical discourse on turning ‘Swords into Ploughshares’. Gorky Park is accessed via an immaculate underpass and impressive Doric Propylaea. Therein lie manicured gardens, cafes, fast food outlets, roller blade parks, ornamental ponds and a gigantic sandpit for infants. Open 24/7 it is the perfect place to spend a very safe evening. 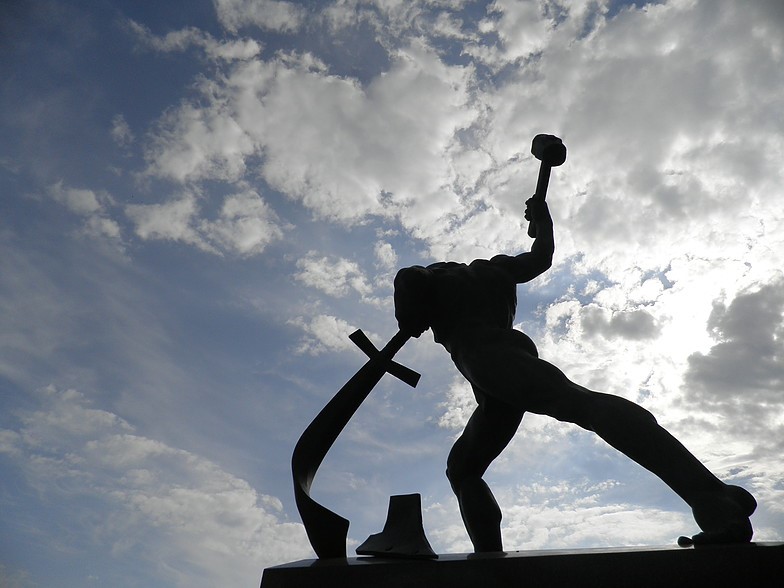 One can simply walk Moscow, but one must appreciate the delights of the Metro. Not only a famous art gallery in its own right, some trains are decorated and even carry mini art exhibitions!

St Petersburg was created by Peter I on the Nerva archipelago and follows a strict grid pattern. A plethora of Neo Classical, Baroque, Art Nouveau and occasional Bauhaus architecture, it is best appreciated by canal boat; the waterways were of course the original thoroughfares onto which face the major mansions.

Churches are abundant; Orthodox Kazan Cathedral and St Isaacs, the Armenian Chapel and most notably, the stunning Saviour on Spilt Blood, built upon the spot of the assassination of Nicholas II; interior smothered with spectacular mosaics, exterior surrounded by plaques commemorating his reforms. 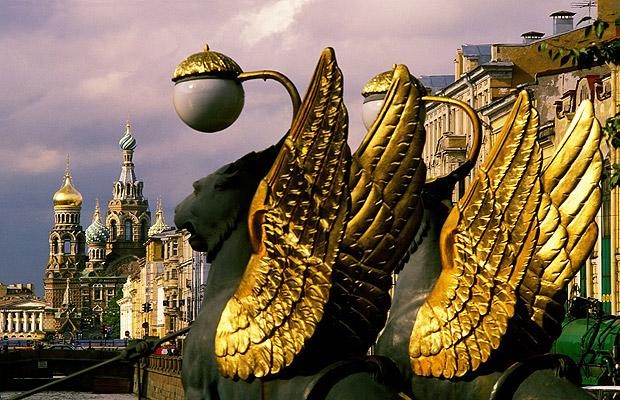 Across the Neva lie the St Peter and Paul Fortress (burial place of Tsars and other notables), the Lenin Statue (bedecked with carnations as we arrived just after his birthday) outside the Finlandia Station (we had a military escort in order to view the train from which he returned from exile in August 1917 ) and two lighthouses decorated with ship beaks al la Roman Rostra, Peter I’s original cabin (that man was tough!) and his Kunstkammera (Museum of Anthropology and Ethnography); the first University in Russia and one of the oldest in the world. Perhaps unforgivably, this museum is more famous for its collection of anatomical specimens, but it was Peter’s ‘Chamber of Art’ and his ‘oddities and curiosities’ also include tools, scientific and astronomical instruments. The anthropological section displays C6BC silver Scythian artefacts including a death mask. Originally the public were enticed in with free vodka and coffee, now we pay.

The Winter Palace/Hermitage Museum is the jewel of the City. Site of the bloody Red Sunday Massacre which presaged the 1905 Revolution and overthrow of the Kerensky Provisional Government in the White Room by Bolshevik forces in 1917, it is perhaps the finest museum in the world. We have Lenin to thank for the preservation of many of the treasures therein as he spent five years cataloguing the artefacts and prevented looting with promise of execution on the exact spot of the intended theft. Although spread across five separate buildings, do take an official tour of the ‘must sees’ (Old Masters, Moscow Campaign Patriotic Hall, mechanical peacock, Tsarskoe Library, State Rooms, Raphael Loggias – one mirror still bears bullet holes from the 1941- 44 siege) but then make your own way to the Antiquities Collection. Hellenistic and Ancient Greece (5 rooms), Ancient Italy and Rome (7 rooms), Armenia and Georgia (3 rooms), Pre Islamic Central Asia/ Parthia/Greco-Bactria (9 rooms), Northern Black Sea (3 rooms), Caucasus (3 rooms), Egypt (1 room), Scythia (3 rooms), Middle East (3 rooms). Sadly for us, much of the famed Greco-Scythian Gold from Kul-Oba (additional ticket, the Gold Room) is on loan to Athens until October. It isn’t simply the sheer volume of ancient culture on display; it’s also the quality and sophistication of the displays. Best of all, with the correct documentation, regardless of nationality, pupils gratis. We spent ten hours crippling ourselves; take two days with a school party if necessary – but do it! 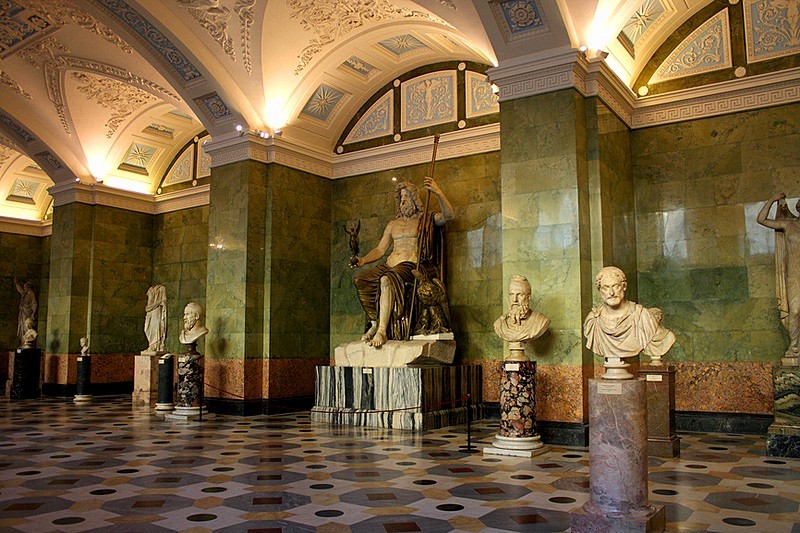 Peterhoff Palace we decided against as the fountains were not active until May, but the Catherine Palace at Tsarskoe Selo was perfectly positioned for a morning visit before our flight home. Maliciously damaged by retreating forces after the Siege of Leningrad, it is a marvel of restoration – in particular the Amber Room. Miraculously, the private rooms of Catherine the Great designed by architect Charles Cameron, survived largely undamaged except for graffiti. Having read his ‘Baths of Rome’ Catherine summoned him to Russia in 1779, abandoned her original plans for a Diocletian Thermae style building and entrusted the Scot to the execution of a more restrained, Neo Classical plan. Whilst her private apartments are more Romano Wedgewood Green in style, the gardens (often compared to Stowe) contain several Classical allegorical follies, a two storey Greco Roman cold Bath House, a two storey Neo Classical Pavilion (Cameron’s Pavilion) adorned with statues of philosophers (always her favourite promenade) and a model town, Sophia, designed to represent Constantinople. 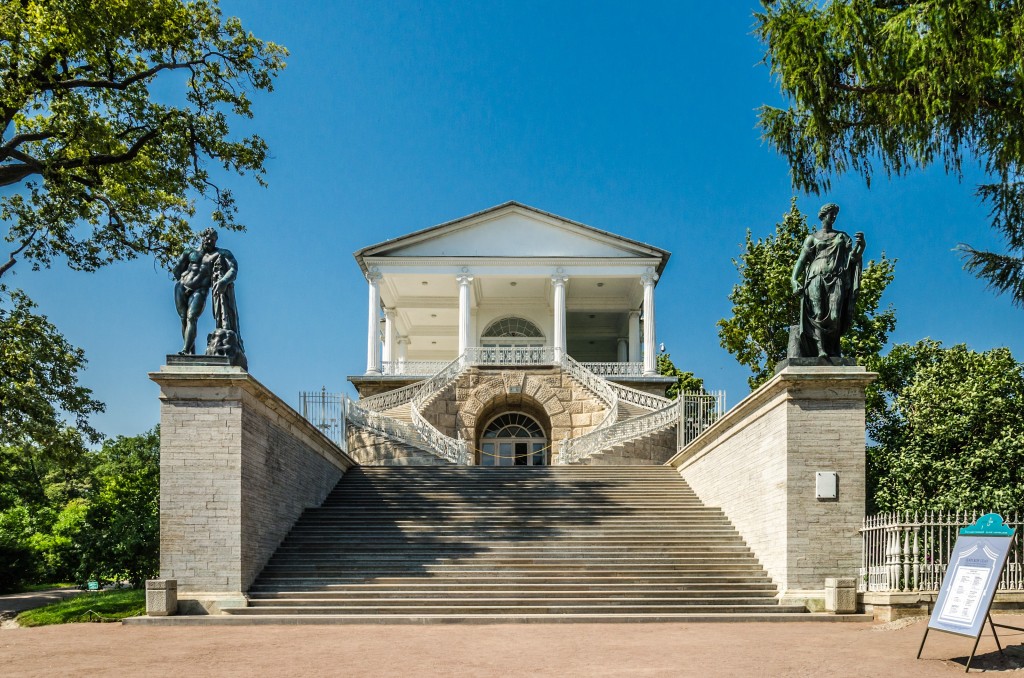 A Classical education was preeminent in Russia for hundreds of years because of their debt to Byzantine Civilisation, ancient trade routes and Black Sea Cleruchies.
It was suppressed by the Bolsheviks and until Perestroika, a black market existed not just in blue jeans but also in Platonic dialogues!

Perhaps one cannot justify a solely Classics trip to Russia, but a joint trip with the History department (and/or RS) would certainly reap cross curricular benefits.

For those unfamiliar with the Marxist inclination of Ste. Croix, Ben Farringdon, George Thomson et al, in addition to their works, the following may be of interest.

Between the Party and the Ivory Tower: Classics and Communism in 1930s Britain. Henry Stead and Edith Hall (KCL) 2014. Click here to read more.