A Long Weekend in Roman Barcelona and Badalona (Barcino and Baetulo)

It was supposed to be a romantic and relaxing Birthday/Wedding Anniversary much-needed-break……..good thing we packed our walking boots!

Barcelona is certainly not only Gaudi! 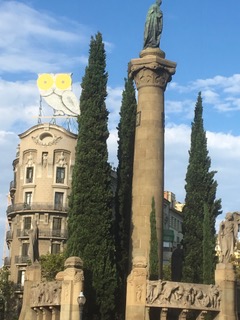 Roman Barcelona is very easy – acquire a decent map and just follow the Walls, clockwise or anti depending upon your starting point, detouring as necessary!

It would be lovely to confirm the founding by Hamilcar Barca, or even

Herakles! The Laietani occupied Taber Hill (Ciutat Vella/Old City now the Gothic Quarter) and perhaps the Greeks set up a Cleruchy at Kallipolis C3rd – C2nd BC.

The first Romans settled here during the Cantabrian Wars and Augustus formalised the occupation in 14 AD, by naming the area Barcino (from Colonia Faventia Julia Augusta Pia Barcino)

First for us was the small Roman Necropolis of Plaça Vila de Madrid, set outside the Mura as per norm. Wandering through small streets and smaller squares we viewed aqueduct remains in Carrer de Duran i Bas and with a little backtracking a host of Mura, arches and defensive tower remains at Carrer de la Palla, Carrer de la Tapineria and Plaça de Ramon Berenguer. 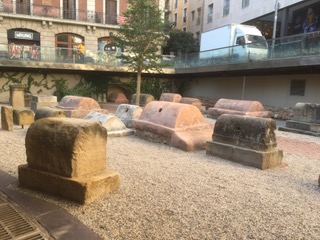 We entered the Gothic Quarter via the two impressive defensive towers and late Roman Wall section on Plaça Nova. 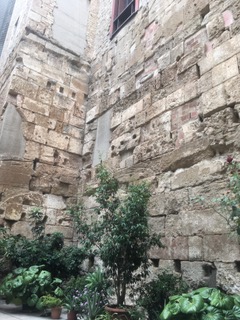 The interior of the Gothic Cathedral (built atop a Paleo-Christian Basilica) of the Holy Cross and Saint Eulalia is stunning and not to be missed. On entering the secluded Cloister, one cannot fail to recall the Capitoline Geese. Here they belong not to Juno but Saint Eulalia – same function though!

Next, across the Forum remains and into Carrer del Paradís, through the arched doorway of an apartment block to discover the truly splendid four remaining columns and architrave of the Temple of Augustus, on Taber Hill. 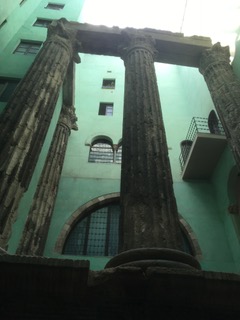 I vaguely recall purchasing much needed sustenance before descending into the subterranean Musea d’História de la Ciutat and Excavations beneath Plaça del Rei – once we located the entrance! Yes, there’s a sign. No, we couldn’t find it…….as the entrance is at the rear of a bookshop. Splendid idea. 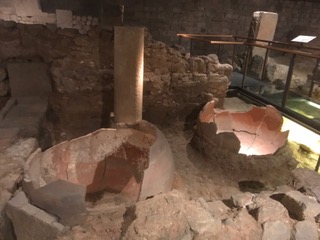 We spent ages trying to locate Domus Carrer Avinyó as the Roman Murals looked promising (http://ajuntament.barcelona.cat/museuhistoria/en/roman-mural- paintings-domus-carrer-avinyo) The Doorman at Nos 15 denied all knowledge despite sitting in front of a Domus Avinyo sign. The Tourist Office said it was open. Doorman shrugs. Web Site states opening hours. On our fourth return visit, resigned  Doorman phones someone “Tancat”. There may be a possiblity of a private Tour, but we drew a blank. If you fare better, do please let us know!

However, there’s a smashing stretch of Wall, minsicule section of the Harbour Baths and Roman Gateway in the nearby mini shopping arcade of

After a very late lunch in Mercado de La Boqueria (they were actually closing but a friendly proprietor took pity on us!) we trudged happily back to our Hotel passing more beautiful facades and Roman Wall remains. We ate and drank with locals. We slept soundly.

We didn’t think anything could really top Barcelona for Roman remains, but dare I say it – we were wrong! Oh My! I simply cannot do it justice. Yet again another subterranean Museum – just us and an indulgent local Mother helping her son with his Roman School Project.

Passing through the excellent ground floor book and gift shop one descends to 3,400 m², of sheer indulgence.

Dating back to C1st BC the Baetulo remains consist of well signed (English, Spanish, Catalan) and beautifully lit remnants of the Cardo Maximus and Decumanus Maximus. Therein lie a well laid out palaestra, thermae, walls, wall paintings, wells, sewers, drainage, workshops, hypocaust, wooden doorways, bronze sockets, tavernae, insulae and Domus. Did I mention sewers and drains? There are a lot of sewers and drains! 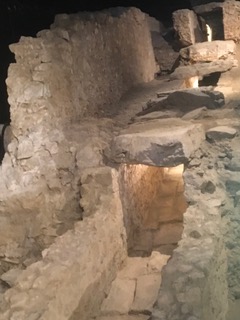 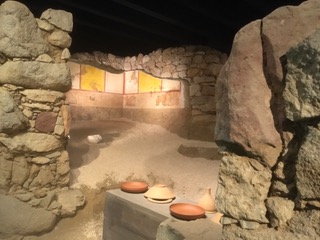 The exhibition area (conveniently positioned half way through with seating and audio visuals) displays a very good range of artefacts from everyday life, public and private religion, trade, politics, warfare, pottery, sculpture, jewellery, toys, stele……….. Statuary includes the marble Badalona Venus and portrait of Agripina. Epigraphy includes a Tabula Hospitalis and Bronze Stele recording an agreement made between the town and a notable Patrician.

The beauty of this museum is that in addition to naming each building there are also explanatory paragraphs plus photos of appropriate artefacts from other Roman Sites. The labelling teaches.

Close by is La Casa dels Dofins (late C1st Domus + wine production area) and the Garden of Quintus Licinius (appropriately replanted based on achaeobotanic finds). Both have restricted opening hours, so take note.

As modern Badalona has a Chinese population, for lunch we availed ourselves of a rather tasty Chinese/Catalan Tapas! There is also a beach and decent promenade – so quite a good day out, all in all.

We’ve forgotten the Archaeological Museum! Atop Parc de Montjuïc lies a C17th Castle, a ‘Greek’ Theatre, fountains, gardens, terraces and wonderful collection of Neo Classical buildings built for the 1929 Barcelona International Exposition; one of which is the Archaeological Museum of Catalonia. The three mile walk took us about an hour; our choice, the Metro is comprehensive.

The Archaeological Museum is circular; one follows the historical development of Catalonia in an anticlockwise direction. The hub contains a selection of geographically wider artefacts (including Phoenician Glass and Boeotian Terracottas). The first floor consists of a marvellous Archaeological Reading Room/Library (closed when we arrived but opened willingly by the very friendly Guardians, the elder offering us an unasked for Tour!) with reproduction of Lady of Elche (original in Madrid), sarcophagae, much epigraphy, mosaics, stele, an excellent models of the Circus Maximus and the Falo de Sasamón – a five ‘point’ flying phallus surmounted by female with laurel wreath.

All Catalonia is represented here including some beautifully lit Punic, Greek and Etruscan imports; ceramic, glass, metal. Undoubtedly, in addition to the Flying Phallus, other highlights are the Priapus of Hostafrancs and the incomplete but huge Circus Mosaic. 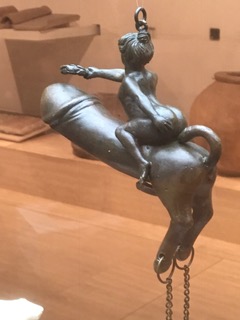 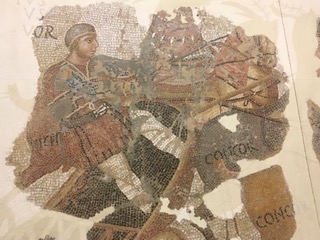 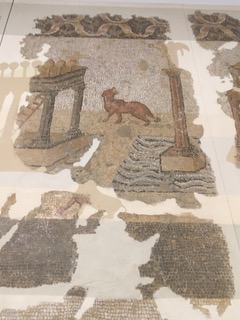 Irate workmen chased us from the Theatre so eschewing Castle and funicular we descended via more gardens, crossed Las Ramblas and headed towards the Monumental Statue of Columbus and via the seafront, sought more Roman remains.

The now familiar Doorman of Nos 15 Carrer Avinyó greeted us as we headed for coffee in the courtyard of Carrer del Correu Vell (more Mura and round Towers) and Plaça Traginers. Thereafter we visited the remains below the former market of El Born and Mercat de Santa Caterina, where we had a fabulous lunch. (Barcelona Markets are definitely the best lunch stops!)

Had we more time we would have lingered in Parc de la Ciutadella (Classical statuary, fountains, boating lake, Mammoth sculpture), but there was a ‘plane to catch and so we headed back via the Classical Arc de Triomf (built for the 1888 Universal Exhibition), palm trees and busking jazz musicians.

It was a fantastic trip and one we heartily recommend to Schools. You could extend it with Day Trips to Tarragona or Emporio, combine with the ML, Art or RS Departments……..or just nip over for a few days yourselves! 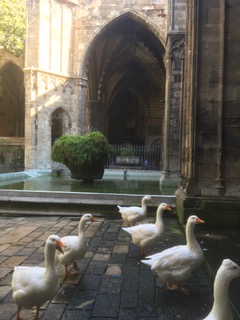