A long weekend in Rome

February in Rome is uncrowded. Some Christmas decorations remain for added festivity, but the hoards have left, Sites and Museums are fairly empty, people generally less hassled…….and the weather clement enough to sit outside at 10pm with an espresso, grappa, alloro, liquorizia or other digestive of choice.

One also has a better choice of Hotels (pre Valentine’s and Half Term!); thus we could stay at the Giulio Dell’Opera once again with Romano – all the better to appreciate the refurbishments.

The balmy weather lured us away from welcome drinks and re-acquaintance and so we set off to see the newly floodlit Palatine; just for a short walk you understand…… 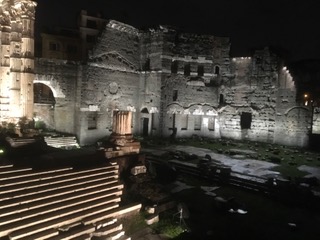 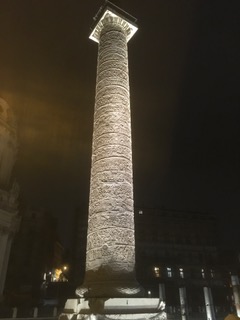 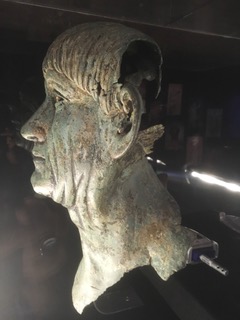 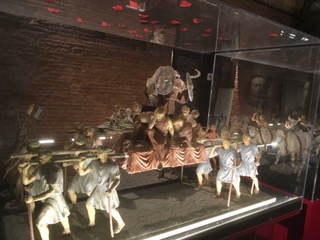 Our first full day began with the Trajan Emperor and Builder Exhibition at Trajan’s Markets (http://www.romeandart.eu/en/art-news-trajan.html).

We’d read contrasting reports but you never know until you go, so we paid the additional entrance fee – and were underwhelmed as it consists mostly of plaster casts, TV Screens and Information Boards. The best exhibits were the vintage Triumph Models and unnerving Germanic life size Bronze Trajan Head that was possibly worth the entrance fee alone. 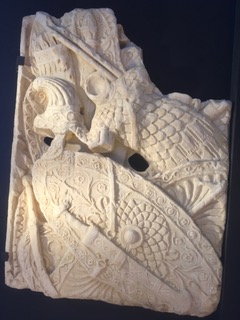 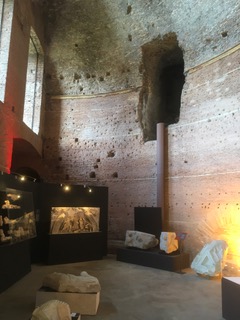 We appreciate that time is tight on a school trip, but are amazed by those who find Trajan’s Markets not worth even an hour’s visit. Through the two storey Imperial Fora Museum (30mins minimum) lies a well preserved street section, original lead piping, columned facades, Exedera remains with paving, Republican masonry, two galleries and six storeys of Roman and mediaeval tabernae and offices. Don’t ignore the modern art instillation in Via Biberatica, it is actually a modern Trajan’s Column with equally interesting iconography. Don’t ignore the shops and offices – some have original stucco and fresco others show 3D and filmed explanations of restoration and archaeology. The galleries contain exquisite marble fragments of entablature celebrating the Dacian Wars.

We entered promptly at 9am and left at noon for another appointment, once again not having seen it all.

Having snatched a quick drink, suppli and pizza at the old established Caesar Pizza on the steps of Via Magnanapoli, we waited by Trajan’s Column for our next appointment, a last minute online booking with Roma Sovraintendenza for entrance to the Imperial Fora. It’s always worth checking out this Web Site to see which normally ‘off limits’ venues are accessible. For larger Groups it’s best to book separately; we were 5 random strangers paying 4€ for an excellent 90mins private tour and it mattered not a jot the Tour was in Italian. Down the steps we trotted to the base of Trajan’s Column, through the columns of Basilica Ulpia (correct repositioning planned) and into the wide expanse of the white marble floored Forum. The highlight however (for me) was to walk beneath Via dei Fori Imperiali into Caesar’s Forum to stand at the base of the Temple to the Divine Julius. I was absolutely thrilled, but received several reprimands for wandering off the beaten path………… 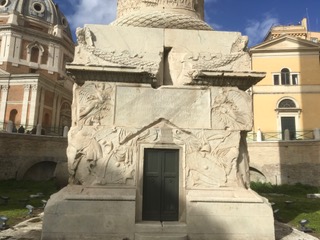 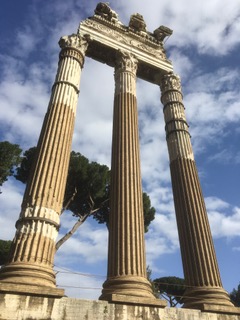 Wrists duly slapped we headed up the Corso towards the Temple of Hadrian, Column of Marcus Aurelius and the newly opened Department Store Rinascente on Via Triotone. “What?! Shopping?!” I hear you cry! “Good Grief! No! More archaeology of course!” 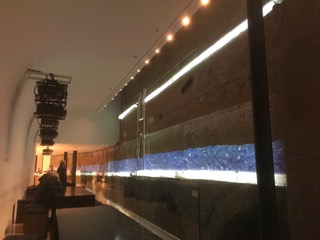 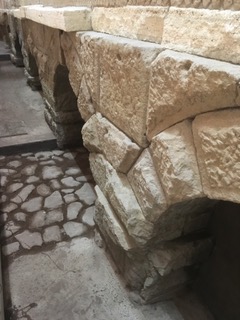 We’d read about the discovery of the Aqua Virgo and duly headed down to the basement fully expecting to see a nice stretch of masonry, take a few photographs and leave. An hour later and we were still there! It’s massive. There’s a bar serving coffee, drinks, light meals and gelato; tables and chairs and a viewing area with comfy seats. The long stretch of aqueduct is behind protective chest high perspex, the masonry ceiling height. On continuous loop is an amazingly effective and informative hologram display depicting the archaeological development of both aqueduct and immediate area. Water flows, villa and domus ground plans sprout fountains and gardens, archaeological strata rise and fall. Adjacent to the aqueduct is a film screen, which traces the historical growth of the area in which Rinascente now stands. It’s impressive, brilliant, FREE and open until 11pm – so now no more worries about keeping pupils occupied when Spagna, Piazza Navona and Trevi have been exhausted and students are all ‘Roman-ed out’!

Our penultimate day and despite being a tad footsore, we headed past the Temple to the Divine Claudius (https://www.maquettes-historiques.net/P38.html), down Via Claudia to the Caelian and the Arch of Dolabella before heading to Basilica Santi Giovanni e Paolo and the Case Romane del Celio beneath. Wow! A Republican Insulae block with housing, shops, Nymphaeum, paved streets and vicus it was developed into a grander Imperial Villa. The wall paintings are superb! For those studying housing and domestic life, this would make for a perfect day’s combination with the Domus and Mithraeum beneath San Clemente and the Domus Romane beneath Palazzo Valentini. 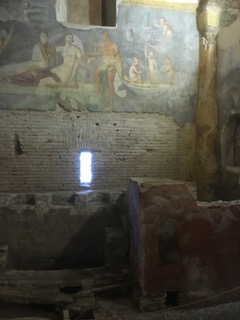 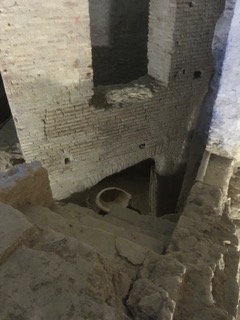 There is a bright, modern museum at the end of the multi-level, positively labyrinthine interior – so this is definitely one for an Inspection Trip unless you can familiarise yourself thoroughly beforehand with a plan. Otherwise, hire a guide.

We opted for an early lunch in one of the snack bars overlooking the Circus Maximus and built into the storerooms of the Palatine before exploring Forum Boarium, but this time in daylight. The fascinating double Porta Carmentalis (https://everything2.com/title/Porta+Carmentalis), Arch of Janus, Temples of Portunus and Hercules Victor and Sacra – probably my favourite area of Rome after Via Appia Antica. We then took a pleasant stroll down to Republican Porticos Aemilia and walked back along the banks of the Tiber looking for Emporium remains. 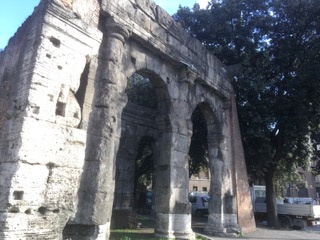 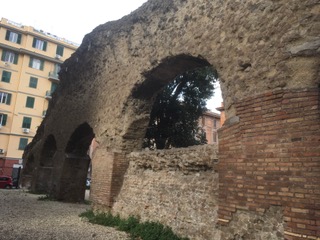 We rested by the ancient Ponte dei Quattro Capi listening to the musicians and admiring the ancient Herms and ship of Asklepius before descending once more into Republican subterranea, this time beneath the Basilica of San Nicola in Carcere. Below the altar, for 3€ one visits 3 Republican Temples; those of Spes (Hope), Juno Sospita (Saviour) and Culsans (the Etruscan Janus – rebuilt by Tiberius) all originally in the Forum Horitorium. A handout and notice boards (in English) make all clear. Sturdy footwear is necessary and one must take care to neither slip nor bang one’s head – but the sensation of looking UP at column bases is one not to be missed.

Remember, as you exit through that first Temple to Spes – THAT IT WAS BUILT DURING THE FIRST PUNIC WAR!

Slightly light headed we headed towards the Jewish Quarter and through Via di S. Maria de Calderari passing (what we later learned to be) the remains of the Theatre Balbi / Circus Flaminius. 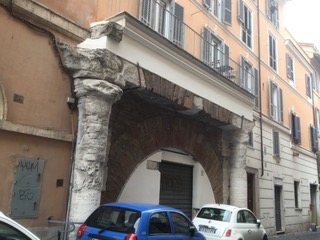 “While Rome is reawakening to its antique splendor, Lorenzo Manilio, as a sign of love for his city, had this house built overlooking the Jewish Square for him and his family”.

Wearily we headed ‘home’ past the refurbished Porta Ocatavia, Teatro Marcello in preparation for another night out with friends.

Final morning and still a few hours not to be wasted!

Heading back from the Tomb of Eurysaces the Baker (http://www.jeffbondono.com/TouristInRome/TombOfEurysacesTheBaker.html)– we wondered whether standards had been maintained in Mercato Centrale, Termini. Yes! Time for an early lunch. Organised by the same Company as the Florence Mercato Centrale, on offer is a vast array of sustenance – cheap prices, a clean and safe environment with free hygienic ‘facilities’. 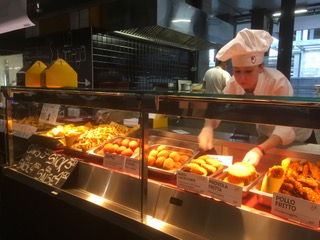 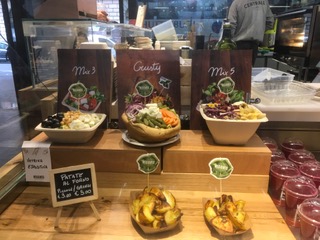 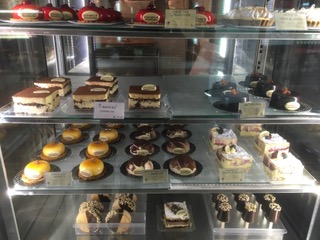 Do visit; you will be neither disappointed nor hungry.

The little amount of time we had remaining we spent in that perennial favourite the Massimo Museum.  Coinage, jewellery, Greek statuary, mosaics galore and wall paintings. Oh Livia! You did have good taste!

Art Through Time: A Global View – Frescoed Wall from the House of Livia

En route to Fiumicino, our very accommodating driver allowed for quick stops at both the Pyramid of Cestius and Il Duce’s EUR.

We were pleasantly pleased on arrival at Fiumicino to see the building work had ended and the smart, clean refurbishments including wide seating areas, picturesque hoardings, free mobile/tablet charging points…….and the inevitable gelato stands! The Departure area exceeded all expectations! No more train shuttle transfer! Euge! Multiple Euge for the food outlets! Porchetta anyone? Euge for the Ostia Antica display! 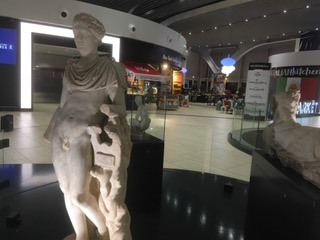 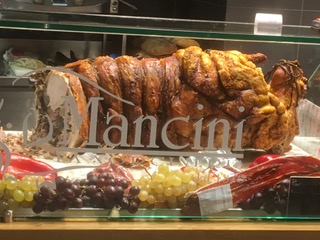 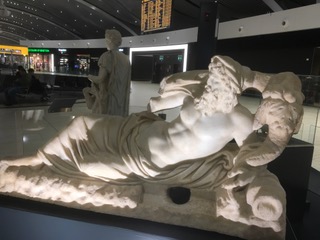 Huge Thanks, as ever, to Allegro Travel – Maurizio, Gabriella, Pietro and Monica. Thanks to Romano for our stay at Giulio Dell’Opera. Thanks to everyone for the wonderful hospitality and for putting up with our incessant questioning and nagging. Until next time……….