Recently, we have received enquiries as to the possibility of a Hotel closer to Naples. Sorrento, for many, is too busy, too expensive, too far south and too full of temptation for ‘escape parties’! 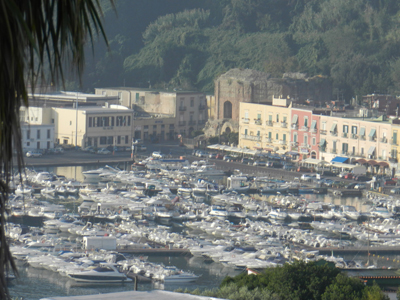 Hotel Il Gabbiano has stunning views of Baia (Harbour and Thermae Fig 2) from its roof top terrace (sauna & hot tub) and we thoroughly enjoyed the Wedding Reception in the gardens from our large balcony – and the cool breezes afforded by our elevated position!   Melita suggested the restaurant next door as we obviously couldn’t gate crash the Wedding – excellent choice, good price, stunning views!

Sorrento remains an easy drive for a shopping session (90mins coast road, less on Motorway) and nearby we chanced upon the wonderful Agriturismo Villa Chiara; C17AD Farmhouse, organic food plus tour of Farm and Vinyards. www.villa-chiara.com 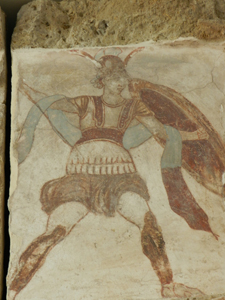 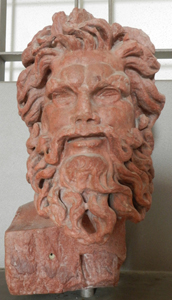 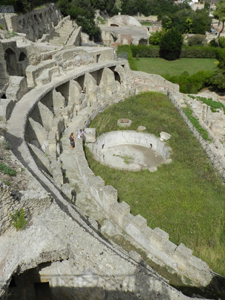 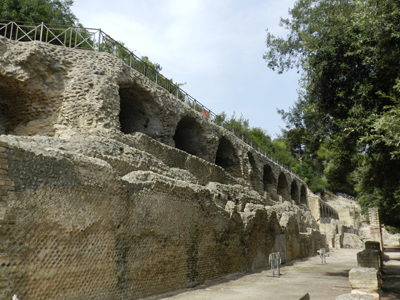 The Archaeological Park of Baia Thermae is stunning (Fig 4) – but tested our thigh muscles in the heat as only the top entrance was open! Luckily, having walked down through the ambulatory villa terraces we crossed through the Theatre to the Temple of Mercury with upside down fig tree and extraordinary multiple echo before discovering the staircase by the Terma Sosandra. Those who avoided crossing over were forced to retrace their steps; we saw them suffering as a result, especially those without water!  Both Terma Venere and Terma  Diana can be viewed from the port but there is no access to either.

The famous Glass Bottomed Boat “Cymba” of which so many have enquired, sails from Baia Port (Sat and Sun only). It looks fantastic with seating options of deck or inside the glass hull (life jackets provided) BUT we failed on three attempts – poor visibility/too much silt/not enough sun. A booking will guarantee you the boat, but not the visibility. Should your luck prove as bad as ours please ensure you build into your Itinerary some flexibility (and we can advise) – or accept the alternative ‘Trip around the Bay’.  www.baiasommersa.it/submerged_baia.htm 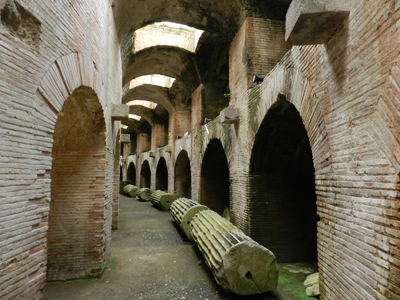 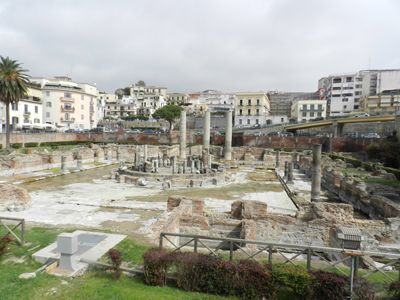 Puzzeoli’s Rione Terra (atop the Greek Cleruchy) follows the street plan of the early C2 BC Roman settlement. The Flavian Amphitheatre (Fig 5) was deserted, the Temple of Neptune can only be accessed on prebooked official tour subject to availability, ditto the Temple of Augustus below the Duomo (Sat and Sunday only). Nevertheless a good harbour front walk and a plate of gamberoni beside the Macellum/Tempio di Serapide (Fig 6) made for a pleasant Sunday afternoon. An excellent final stop en route back to the Airport, why not combine with a brief  visist to Parco Vergiliano a Piedigrotta (not to be confused with the very pleasant Parco Virgiliano near Cape Posillipo) immediately below the beautiful Santa Maria di Piedigrotta beside the lovingly restored Mergellina Station. The  Neapolitan Crypt (Roman tunnel connecting this area to Puzzeoli, originally large enough for military wagons and carriages) is closed, but this small park contains both Vergil’s ‘Tomb’ and that of Leopardi and is planted with flora mentioned in the former’s poetry. (Fig 7) 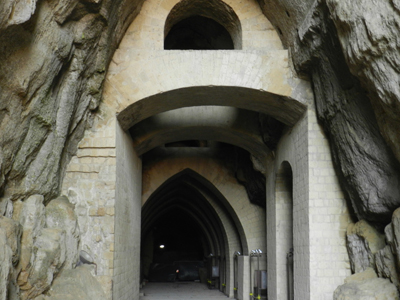 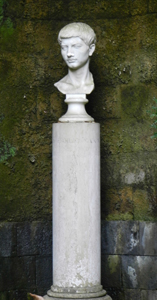 We remain underwhelmed by Solfatara (large grey barren crater emitting a few puffs and muddy bubbles – sorry Geologists and Geographers!), beware taking pupils with asthma. Goodness knows why the ancients visited to relieve bronchial symptoms as it nearly finished me off! We dared not attempt the Grotto of the Dog in Agnano………. 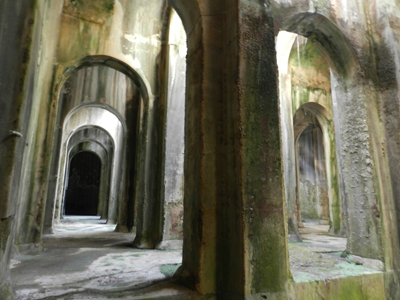 In beautiful, sleepy Bacoli a confirmatory local phone call to Ms Imma ensured we were met by her brother who showed us around the amazing Piscina Miribalis (tip only, no entrance fee,  prebooking only; parking at start of village, 15 mins walk to seafront not harbour, follow one small sign up narrow steps, turn right by church). The huge vault supported by 48 pillars (Fig 8) originally connected to the Serinum Augustan Aqueduct ensured the Fleet a regular water supply. A short walk from central Piazza Guglielmo Marconi down pedestrianised Via Agrippina took us past ancient harbour walls to the small port, Tomba Agrippina (Fig 9 – actually the top of an Odeion) and a choice of lemoni or cappuchino grantita. 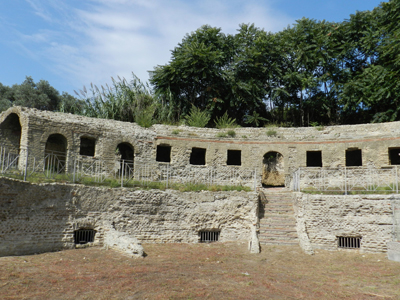 Also in Bacoli, we followed a funeral procession….as the police, musicians, hearse and mourners processed up the Main Street, all shops respectfully closed their shutters. As soon as the procession passed, they opened one by one. Very moving.

Leaving Bacoli en route for Cuma, we drove up Monte di Procida for stunning views across the Gulf to Vesuvius, Monte Faito and the islands of Ischia (Greek Pithecusae) and Procida – the latter an Euboean stop off point to Elba during  the Iron Trade of early Greek colonisation. 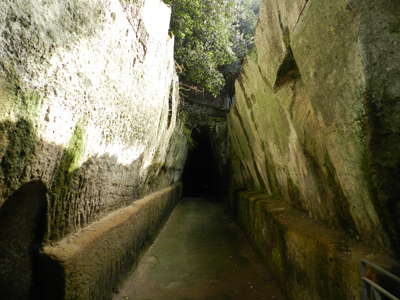 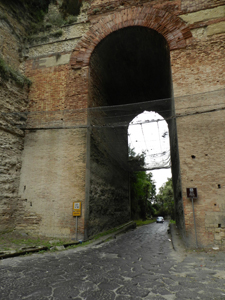 The Cave of the Sybil at Cuma (also originally Euboean) is temporarily closed (Fig 10), but the Akropolis, Temples of Apollo, Diana and Jupiter and cave tombs are more than enough to fill an hour or more. Ilex trees greet you at the gate and the elevated position offers stunning views of a long sandy beach (with Surry racing when we were there), the Roman Forum (undergoing excavation) and Arco Felice (Fig 11) in the distance. Impossible to park with a coach (although you can drive through it), we managed to pull off the original huge cobbles of the Via Domitiana to view this monumental cutting, originally connecting Cuma to Pozzeoli. We waved sweetly at the passing Carabinieri who suddenly appeared and drove slowly past with quizzical gaze………… 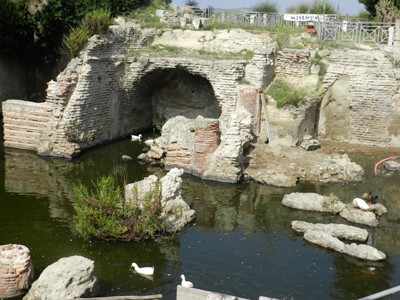 Cape Misenum, according to legend the vast burial ground of Aeneas’ Trumpeter, originally housed the Villa of Marius. Luculus, Augustus, Tiberius….even Hadrian all supposedly died here. Although the Theatre is out of bounds and the Grotta della Dragonara appropriated by the navy, remnants of the Sacello degli Augustali (reconstructed in Castello Baiae) heroically emerge  above the effects of bradyism to provides a sanctuary for aquatic bird life. (Fig 12) The rare examples of Augustan living quarters around a military port lie largely in privately land and the local Church. Lake Miseno, chosen as a substitute for the silted up Portus Julius is now a small holiday resort with gently shelving long sandy beaches – a worthy spot for lunch and a restorative paddle. 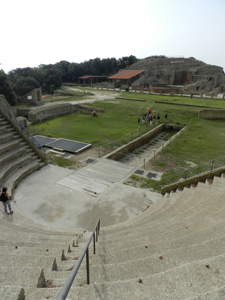 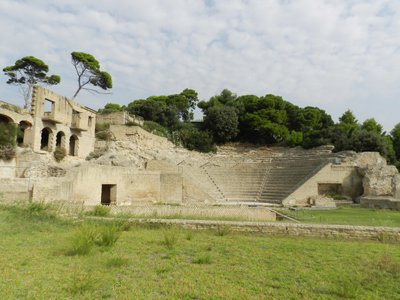 New to us and in our opinion a total MUST is the Pausylipon (Seiano Grotto – Pausylipon Archeological Park on Cape Posillipo between Pozzeoli and Naples – Fig 13). Reached via a ghastly industrial area and Guided Tours only by special reservation; is the Villa of Publius Vedius Pollio (he of the slave and eel pond). ‘Bequeathed’ (Ha!) to Augustus after Pollio’s death, the villa and its grounds include C1 AD Nymphaeum, Theatre, Odeion, Thermae, vineyard, garden and views down to the ‘School of Vergil’. (Fig 14) Accessed by a C1AD 800metre tunnel (built by Lucio Cocceio Aucto, the connection to Sejanus is spurious) one passes remains of a small necropolis before emerging into the Villa Grounds proper. A short drive away is Gaiola Underwater Park (beach, educational and diving centre – seminars on application) from which a glass bottomed boat will take you in 90mins to Marechiaro, islets, Trentaremi Bay and submarine archaeology. A short video precedes the Tour. If booked together with the Villa Tour a guide will escort you to and from Gaiola Harbour. If done separately beware the walk from road to harbour. Twenty minutes down steep steps without shade is quite pleasant – the return climb is not! 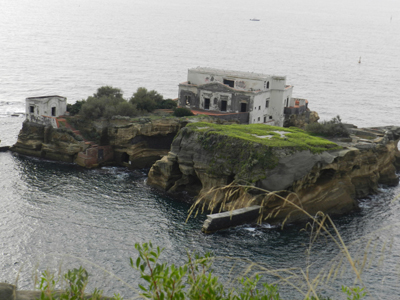 John, having had enough of driving around amid crazy Neopolitans, we decided to drop off hire car and cases at Naples Airport and spend the day unencumbered exploring this wonderful, edgy City before our late flight. Disaster! Left Luggage was closed and our last day looked scuppered – until Roberta in the Rome Office organised luggage storage at 4* Hotel Del Real Orto Botanico opposite Naples Botanical Gardens!

Bang in the centre of the historical district and thus within easy walking distance of Station, Archaeological Museum and major Sites it was perfect. Young Joshua (Asst Manager) escorted us on exemplary Tour of the Hotel and its marvellous roof top terrace. We’ll be back to stay and highly recommend it for Schools. 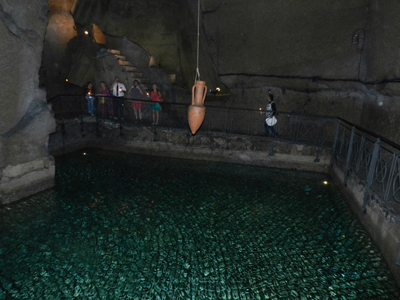 A 10min walk around the corner took us to the Duomo and San Genaro’s recently liquified blood, we then ate royally in a small Tratoria in Via Tribunali. Luckily the Naples Underground Tour (Fig 15) was next, so thankfully we walked off the zillion calories in the cool of the hour long tour past suspended WWII bombs, German instillations and a Tank. Archaeologically the Tour wasn’t exceptional but pupils will love squeezing through the tunnels carrying open candles to view the Greco-Roman aqueducts and huge cisterns. Caveat – I mean squeeze! Folk of larger girth have to wait in another part of the grotto until the remainder return. Height is not a problem, claustrophobia may be; it is not front-row-forward friendly!  After an hour we emerged back into Piazza San Gaetano and a small house just around the corner with concealed wine cellar beneath an ancient roll away-bed – thus we descended to the remains of the Theatre in which Nero ‘performed’! (Fig 16) 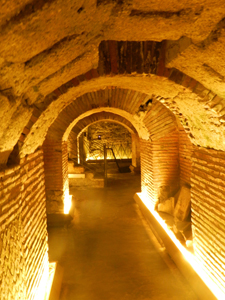 Theatre in which Nero performed! (Fig 16) 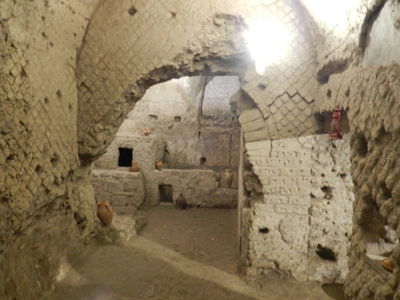 A HUGE thanks to everyone at Allegro Travel – Maurizio, Gabriella, Emanuela who did so much in helping me plan the Itinerary and to Roberta for rescuing our last day.

Despite the unseasonal excessive heat and humidity, despite crazy drivers – we had a fabulous time.