Our annual End of Season Trip to Crete has become somewhat of a winding down ritual.

A self-catering Studio in Hotel du Lac overlooking the Lagoon in Aghios Nikolaos, a bit of hush with few Tourists around, some warmth, visiting with friends, recharging batteries, good food, organic Raki from local stills…….

Nothing hectic. Maybe check out a new Hotel. Always a little archaeology.

This time we also entertained regular Clients (now friends) on a Recce for their 2018 Trip. We met for breakfast, went our own ways during the day before meeting up again for Dinner, comparing notes and amending their Itinerary. Perfect. It was also a good opportunity to introduce them to their Guide.

In addition, we met up with our Agents and long-standing friends, Manolis and Inga, plus the Coach Driver for a School Group transferring from Santorini to Crete. 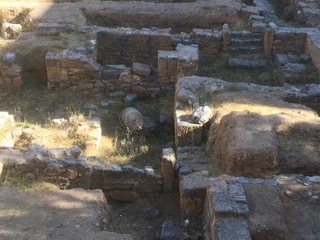 Aghios Nikolaos is situated upon the Dorian Lato Pros Kamara, minor remains in the centre of town. It may be sadly neglected but at least it hasn’t been filled in to make a car park! The Archaeological Museum is actually open (Hurray!) ……….but there’s nothing on display (Boo!) bar packing boxes and bubble wrapped statuary lurking tantalisingly behind bars. The lady on the desk didn’t charge admission, it was a nice walk up the hill – maybe next year…. 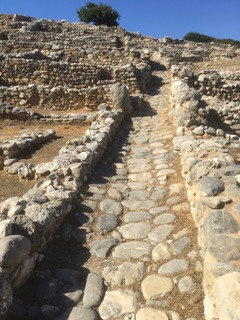 A twenty minute drive from Aghios lies the Minoan Town of Gournia, set in a commanding position overlooking the Mirabello Gulf. It boasts fantastic well paved streets, numerous housing, domestic instillations, Late Palace, rectangular Theatrical area, possible sacrificial block and burial area; all well signed. A significant amount of (EU?) money has been spent on what appears to be a café, shop and toilet block, sadly all closed; this was to be a recurring theme.

The town of Gournia – http://www.minoancrete.com/gournia.htm

Lato is a cracker of a site and one my pupils always enjoyed visiting. Originally the main town for Kamara Port (Aghios Nikolaos) it is famed for an Agora, well-defined rectangular theatrical area (seating, pro skene and altar), Temple, Exedera, Cistern, Prytaneon, orchestra/halos. Most spectacular of all are the fortifications, gates, masonry and steps. Oh….and the view. Not a bad view at all! Be prepared for a steep climb, use the toilets by the ticket office first. Good signage. Estimate a minimum of 90mins.  Be impressed by their having fire extinguishers on Site! 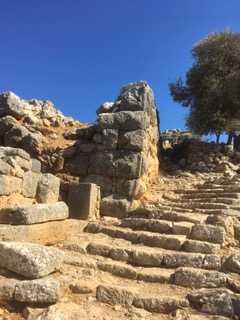 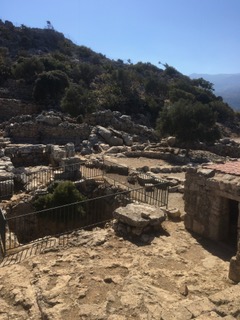 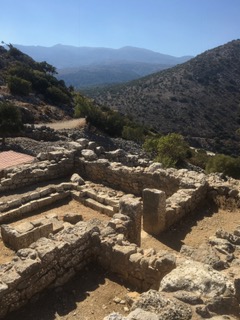 The oft-bypassed Sitia Archaeological Museum is a little gem. It holds a vast selection of Minoan domestic ware, Linear Clay Tablets, larnaxes galore, jewelry and a somewhat eroded bust of Hadrian. Its treasure though is the Gold and Ivory Kouros/Prince with Crystal Eyes excavated at Paleo Kastro. It’s almost impossble to photograph, so you’ll just have to visit.

See – A Kouros in the Archaeological Museum Sitia – made of gold and ivory – http://www.meetcrete.com/a-kouros-in-the-archaeological-museum-sitia/

Sitia itself is a lovely town. Having escaped the effects of mass tourism it maintains a good balance between traditional and modern. Interesting backstreets, Venetian remnants, waterfront promenade with cafes, Tavernas to satisfy all tastes. It also has a good energetic student vibe and makes for an excellent coffee or lunch stop. There’s a beach too, if you have longer.

We’ve a soft spot for Paleo Kastro, one of my pupils having excavated at the Peak Sanctuary. Usually we are alone, not so this year. Amazingly, the stranger to whom we chatted had been at School with our Client on recce!  Both were Kings Scholars but had lost touch over twenty years ago. It was a huge pleasure to reconnect them.

PK is interesting because in addition to the usual housing, street plans and burial areas there is evidence of earthquake destruction, multiple reoccupation and a possible central planning authority. One can trace building development; mud brick and ashlar, wall paintings, domestic industry and trade. There is no Palace (yet!) but connecting roads have watchtowers! Very good signage. Potentially larger than Knossos it is set in a prime position on a long curved sandy beach with a two basic Tavernas and a Food Truck. More substantial fare and Tavernas are in the village. 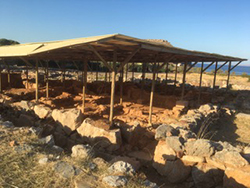 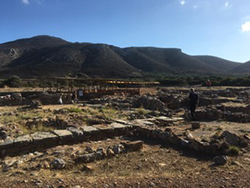 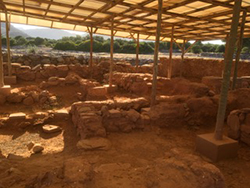 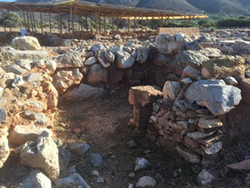 Psillos, the Minoan islet of Mokhlos remains a firm favorite. Once connected to the mainland by a causeway/sand bar, it was an important early trading and possible pilgrimage centre as suggested by the large number of shrines and Nekropolis. Excellent signage. It is easily reached by either swimming from the fishing village on the mainland or hiring one of the fishermen. One summons the return boatman by ringing a large bell near Villa Adiadne (apotheke / storeroom). The once sleepy fishing village has now become very trendy with small bars nestling alongside the original two sea front tavernas, posh double deckchairs cemented into the rocks. Thankfully, only a few venture across to the archaeological site – most prefer to sit, nursing a beer whilst admiring the view. It’s just over an hour’s drive from Aghios but I preferred a private charter for my pupils as it made for a super relaxing sailing excursion; but still with archaeology. Although no longer the unspoilt fishing village of yesteryear, it manages to retain its sleepy atmosphere and has certainly not become ‘tacky’. 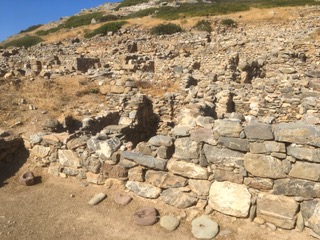 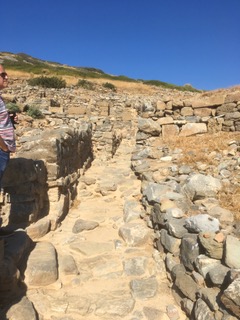 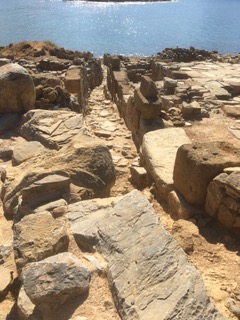 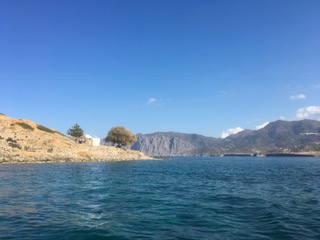 The history of Mochlos – http://www.minoancrete.com/mochlos.htm

Crete is known for Monasteries and Byzantine Churches; but it’s hard to surpass C13th Panghia Kera with its dazzlingly bright frescos, some say the best on the island. We love the depiction of the Angel visiting Joseph. Joseph’s expression is priceless! There is a little tourist shop and café to the rear and an excellent Taverna cross the road. 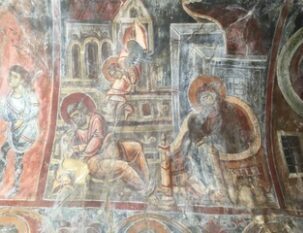 The church of Panagia Kera at Kritsa – Orthodox Crete – http://orthodoxcrete.com/en/places/the-church-of-panagia-kera-at-kritsa/

Not bad for a relaxing week we thought; and the only silly thing we did was to run out of fuel in a very out of the way village. Thank goodness for an odd mixture of Ancient and Modern pigeon Greek and Cretan Xenia; we were soon on our way again thanks to the generosity of farmers in a little cafenaion willing to siphon off their petrol; I hope it was their petrol……….

Huge Thanks as ever, to Manolis and Inga Pediadites of Alma Tours. Until next time!