Epirus and Thesprotia: Attachment B

Our usual ungodly start (but perhaps better than 03.00. At least no point in going to bed. All running to time. Relaxation at hotel couldn’t last too long (dangers of sleep!). Exploration of Preveza – keep walking, don’t sit down. A typical Gill’s tours first day!!! Memories of our first day in Syria many years ago – arrive Aleppo 04.30, first site 07.30 – mad but wonderful.

Nicopolis – archaeology (Classical and Byzantine) fascinating then botany and zoology even more so. Did you know about antlions? The benefit of having a member who grew up in Kenya! And what about grasshoppers? Super museum – favourites from the group – the frieze with battles with Amazons, reused with mosaic facing and the frieze of gods. Also terracotta plaques with Romulus and Remus. 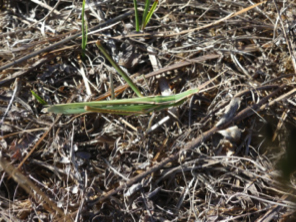 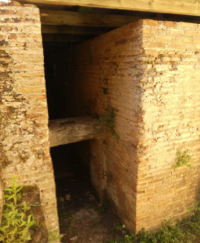 That was just the morning! Much more in the afternoon. First, more walls and gate, then the Odeion which has the channel to hold the curtain for raising during performances – how exciting! After that, (a warning to tour leaders – don’t try to escape for a moment!) I thought I’d see if I could see the West Gate and Nymphaeum from a distance so “escaped” on my own, only to find half the group following!! We didn’t just look from afar, we found the very overgrown Nymphaeum and the rest of the group found us thanks to WhatsApp! 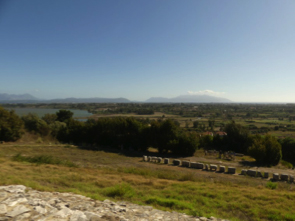 Finally, that day, we HAD to visit the Monument built by Augustus to celebrate his great victory at Actium. A long climb only to find the gate locked – oh dear. However, there was a large hole in the fence next to the gate, so we all trooped through (and then found the bottom gate was wide open so decided we weren’t unwelcome after all). The view from the top was breathtaking – what a place to watch the battle! 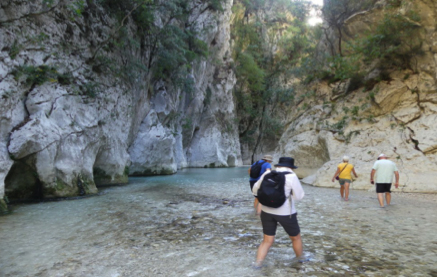 I’ve written too much on our first day so I’d better be a bit briefer from now on….

Cassope reminded us of Priene in Western Turkey – a Greek city with wonderful views over the plain. Lunch in the Necromanteion. What a strange place – oracle of the dead or fortified farm, or both. Boat trip on the Acheron, upstream and back almost to the sea. Then paddling towards the springs of Acheron. 6 of us kept going up the gorge till the water was too deep for paddling, as one member commented “gorgeous”. Finally, birthday cake for Richard – a good end to a super day.

Not for the faint-hearted, a coach trip to Elea – will the coach get under the overhanging trees, will it get round the hair-raising bends, will it pass the landslides? If your driver is Dimitris, the answer is yes! And was it all worth it – undoubtedly. Elea is a fabulous site in a fabulous position – a Greek city in the sky! 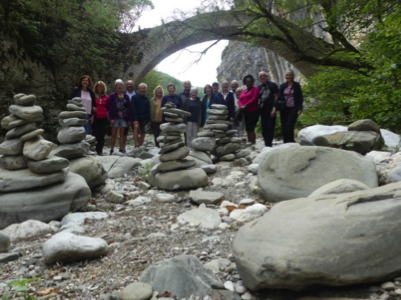 We’ve “done” Dodona (not got the Tshirt but who cares!). Offerings are still being made by the Oak Tree but we did the archaeological bit and explored the site and, I think, began to see what drew people to this place.

Ioannina has a wonderful lake and lots of history but it seemed to us that it isn’t quite sure how to show it all off; it is still uncertain of its place: is it Greek or Ottoman? The archaeological museum is wonderful (as is the museum at Arta) and not to be missed and our day exploring the mountains behind the city was wonderful. The bridges around the village of Kipi left us speechless – all the effort involved in building so many – and we enjoyed adding a cairn to the many in one part of the riverbed. The Vikos Gorge is an amazing sight too (900 metres deep and only 1100 metres wide according to the Guinness Book of Records). 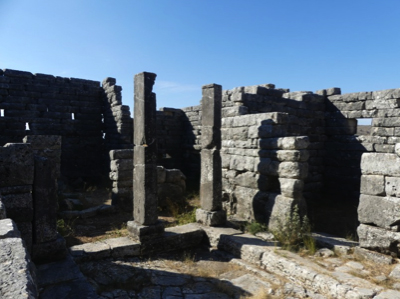 Our last day – Orraon, another Greek city which succumbed to Augustus’ passion to create his new city of Nicopolis, with the best Greek house I’ve ever seen. We spend so long teaching Roman houses that we often forget that Greek houses were rather different. Finally, a real highlight – the beginning of the aqueduct which conveyed water 50km to Nicopolis. How did the Romans survey and manage it? There was the channel running along the hillside (part of it still covered with brick and concrete), two aqueducts and then a tunnel running 400metres through the hillside.

What an end to a trip! 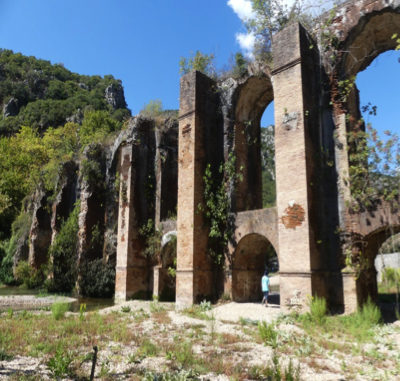 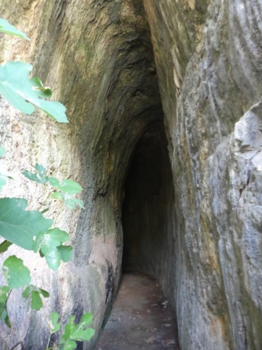 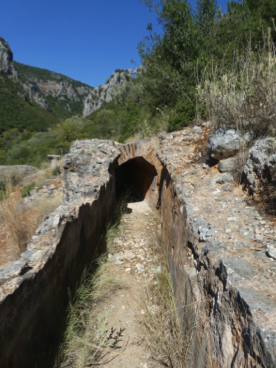