The gladiators are here! And indeed in August they were, for 10 hours of slashing, stabbing and general bloodthirstiness in Guildhall Yard, London, courtesy of Britannia and the Museum of London.

The Yard was set out with tiered seating for maximum viewing potential and vela (awnings) covered the sponsor’s seating and a sandy arena was provided for the action, with musicians (praecones) accompanying on replica instruments. In this instance the sponsor was the Emperor Domitian and his family along with his Batavian bodyguards and his favourite gladiator.  They arrived in style in a large chariot drawn by a pair of black horses and the crowd cheered them to their seats. The commentator gave brief but interesting information on the games before they began – we saw Charun the Etruscan god, who, armed with a hammer smashed the skulls of gladiators to ensure they were dead. He wore a sinister metal mask with ram’s horns and a long black robe to do his work. We assume that the hammer he used on the gladiators was swapped during the show because he did serious damage to a watermelon at the beginning. (Fruit supplied courtesy of Marcus et Spencius- the old jokes are best.)

There were several bouts of fighting. We saw a retiarius beat his opponent and attempt to cast his trident at the Emperor (he was beaten by the Emperor’s gladiator); there were Persians, Thracians, mormillones, hoplomachoi and women! All the while the sponsors of the two sides – Londinium and Camulodunum – were whipping up the crowd and call we did. Iugula with a forward jab of the thumb was much more commonly heard than mitte and a wave of the hand. When Domitian did accede to the crowd’s requests for blood (and he usually did), there was much theatrical spraying of blood across the arena. My son, a drama student, nodded sagely and applauded the skilful use of bloodbags! Charun ensured they were finished off by smacking them on the head with his hammer. To be honest I was surprised there were not more actual injuries as the shields often propelled helmets several yards. 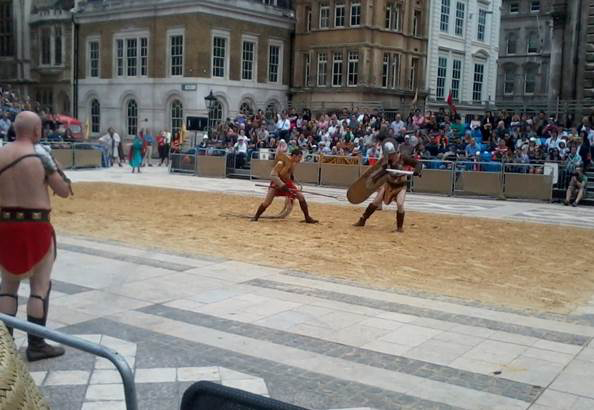 It was only an hour but I can’t recommend it enough, the fighting was carefully choreographed (this is a dangerous business) but they did not hold back; there was the thump of shield on helmet and the sparks flying from the swords. I can see how people were caught up in the blood lust! At the end the “dead” were cleared from the arena by the slaves and the Emperor drove away in his chariot to the strains of the theme from Steptoe and Son.

There was an opportunity before and after to visit a living history “village” to talk to the gladiators and try on some armour. An excellent afternoon out. My only complaint was that the food on offer did not include otters’ noses or ocelot spleens…