Greece with the in laws: Attachment C

Sunday 23
Our flight was on time – or that was the theory. We embarked and waited on
board for 70 minutes, so that (as Mark established on his phone) the departure
was officially on time but “the arrival was re-timed”. Ingenious. We reached
Athens at nearly midnight and found the Sofitel hotel, right by the airport. Very
posh!

Monday 24
A confusing breakfast. There were three breakfast options, all serve-yourself,
and very hard to work out what we were allowed. Then to Centauro Car-Hire,
which was also confusing as we hadn’t realised that it was a 10-minute shuttleride
away. Even more confusing was our extremely modern car with automatic
gears. Seven days and 500 miles later, I still hadn’t understood it.
Finally Mark drove us off, with an interesting left-turn across the motorway, to
VRAVRONA (ancient Brauron), a delightfully peaceful site, with a temple of
Artemis two inches high and a Parthenon (hostel for girls who used to do the
“Bear Dance”, possibly clothed and possibly not. Nobody seems to know why.)
Next stop was LIVADEIA where, instead of consulting the Oracle of
Trophonius (a very exciting cave), we found a cafe/pub. In true English
fashion, we asked for tea (i.e. mugs of hot water) – with milk (yes, condensed
milk). Then we saw that our tea-bags were green tea. Delicious.
Finally DELPHI and the picturesque HOTEL AMALIA. Sunset view from our
window. Brilliant buffet in the restaurant where they ask you to wear plastic
gloves when you help yourself to food – and most guests don’t bother. All staff,
we note, wear masks.

Tuesday 25
THERMOPYLAE. The battlefield is apparently a car-park but then people can
get very annoyed in car-parks if somebody nicks their space. If Xerxes had
attacked today, he’d have come down the four-lane road with three miles of
plain beside it (reclaimed from the sea) and the Spartans would have had no
chance. We saw a 3-D film, with weapons hurled at us out of the screen and
we were all delighted to learn that, at the end, the 300 Spartans were
supported by 700 Thespians. A load of luvvies might have made all the
difference. Hardly any other tourists there – the main visitors were two coachloads
who disembarked to take selfies by the statue of Leonidas and then went
on their way.
Afternoon at DELPHI. Fabulous, atmospheric, even on my fourth visit, and
peaceful – except when a man at the entrance tried to summon his friend
Edward who was apparently still at the mountain-top and was the only person
in Central Greece who couldn’t hear him. Health and Safety has been at work
at Delphi. They have re-constructed the Sacred Way. And you can’t go into the
theatre or the Stadium – the Stadium is quite hard to see at all unless you walk
to the far end.

Wednesday 26
Long drive from Delphi to Nafplio. We stopped for a very nice coffee and kataifi
in THEBES – I’m sure Oedipus stopped here too after succumbing to roadrage.
CORINTH. I had hoped to get to the Acrocorinth after seeing the ancient
site (and where St. Paul preached) but time was against us. 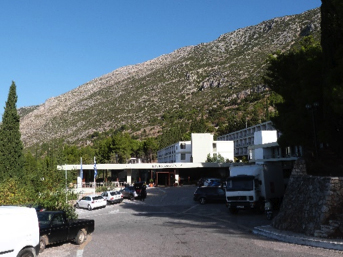 The AMALIA HOTEL in Nafplio had a huge, empty entrance-hall, huge, empty
passages – and hardly any guests. Not quite The Shining but it had its
moments. The supper menu was limited because, as the gloomy waiter
explained, there were no guests. Earlier we swam in their freezing
swimmming-pool and sat beside the pool doing crosswords and we still didn’t
thaw out. The sea would have been warmer.

Thursday 27
TIRYNS. Impressive despite the parts cordoned off and some slightly unclear
descriptions. A major crop in this area is oranges. We saw wayside-stalls piled
high with oranges and nothing else.
MYCENAE: amazing as always. New information-boards made some parts
clearer and some parts still incomprehensible.
EPIDAURUS: theatre needs no explanation. Two and a half thousand years
on, the Greeks have still not finished building the Sanctuary of Asklepios.
Maybe next time. 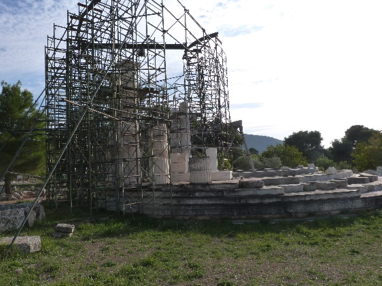 A tour-group had arrived at the Amalia Hotel so it was no longer so empty, and there was a buffet supper. Hurrah!

Friday 28
We left Nafplio via ARGOS, possibly the most depressing town I’ve seen
anywhere, to photograph the replicas of the RIACE WARRIORS in the town square. 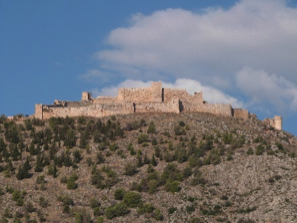 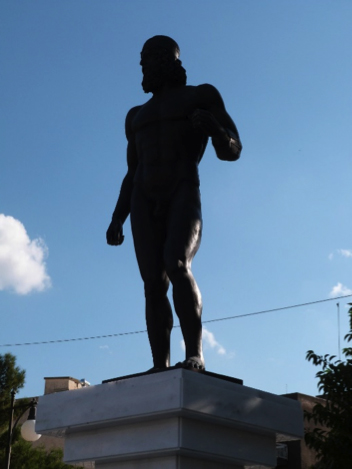 It was a public holiday (OCHI Day – commemorating when the Greeks said
NO to Mussolini): everything closed, and parts cordoned off. CORINTH
CANAL – coffee and another kataifi. The traffic on the motorway coming out of
Athens resembled a giant car-park or possibly the M25 – presumably people
enjoying their public holiday. DAFNI MONASTERY, with lovely mosaics. The
building even included a column from a Temple of Apollo and three brand-new
columns which seem to have been put in the wrong places. 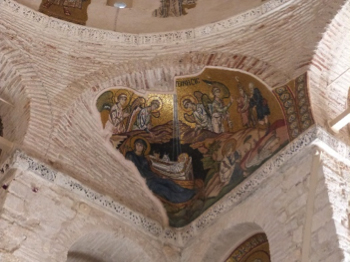 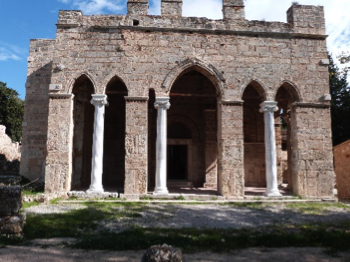 HOTEL AEGEON BEACH at Sounio. Entry with suitcases was via their
gloomy, dark, unlit Games Room, to a gloomy, ancient service-lift, to their
gloomy, dark, unlit Reception with gloomy, unsmiling receptionist. Fortunately,
the rooms were fine, with sea view. Cal, Mark and I tried a swim – the sea was
fractionally warmer than the Amalia pool but the Gale Force wind made it feel
colder. And uneven rocks underneath caused walking in and out of the water
to be full of surprises. We walked up to the TEMPLE OF POSEIDON – a
pleasant walk, despite the gale growing stronger as we reached the clifftop. 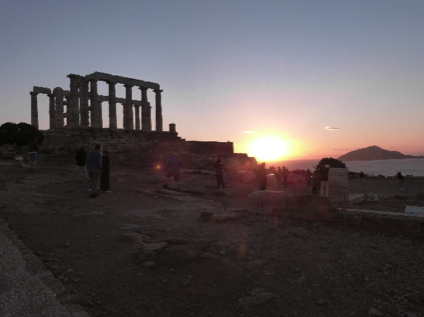 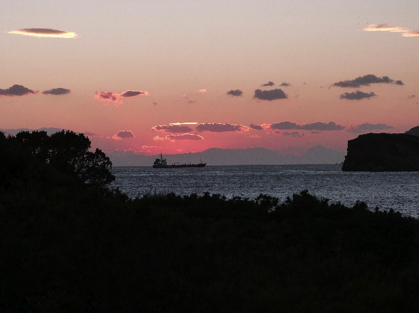 Sounion must be the windiest place for miles – I was here in a blizzard on one
school trip. Free Admission Day – you could hardly move for people taking
selfies. The sun was setting over the bay, with shades of pink and orange
beneath the silver-edged clouds. Tasty supper at a nearby fish restaurant, with
a view to the now-illuminated temple, glowing on the dark clifftop.

Saturday 29
We drove to Argyroupoli where we parked and caught the Metro to Acropoli
Station in Athens. ACROPOLIS MUSEUM, with the Parthenon sculptures
sensibly arranged, unlike the inside-out Elgin Marbles. And a great view across
to the Parthenon which also has a wobbly reflection in the exterior glass of the
top floor. Back for Cal and me to have a swim – still cold and windy, and I
injured my foot on an under-water rock.

Sunday 30
The clocks went back, which gave us plenty of time for breakfast, packing, and
taking the car back to Centauro by 9.58. Afternoon flight (1.25, delayed, of
course) back to Bristol.