Health and Safety in Sicily – REVENGE OF THE MOTHER VOLCANO!

Having disparaged Solfatara (unreasonably, according to some!); we wondered whether the Aetna experience had improved since our last visit…

The drive up, as ever, beautiful. Lovely villages en route. Tourist base camp coach park – ghastly. Impenetrable exhaust fumes, overpriced food and trinket sales outlets; goodness knows what it’s like in high season! A 60€ funicular trip through wispy clouds took us to 4×4 minibuses for a further ascent – good view, pretty lichen, occasional fumarole activity. “Interesting, but not worth a whole afternoon”, we grumbled.

Oh Boy! Did Mephitis made her displeasure known on our descent…One tyre blow out and slip on cinders later (resulting in a double leg fracture and ruptured tendons) and we were stranded without a mobile signal. A mixture of Latin and Greek secured assistance and we were on our way after four hours. “Famiglia agricolori” may have helped – but essentially it was the fundamental good nature and hospitality of the local farming community which saved us; plus some inspired mime on both sides!

Acitrezza makes for a pretty sea side base. Small but active (complete with museum dedicated to Visconti’s film of Verga’s I Malavoglia) the piazza is a good venue from which to contemplate the floodlit Isole dei Ciclopi after dinner. 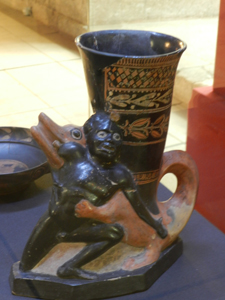 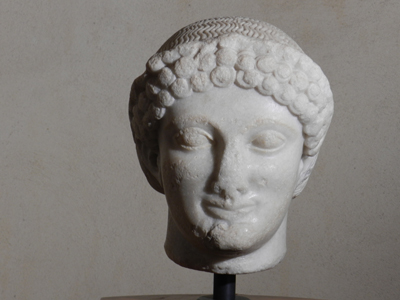 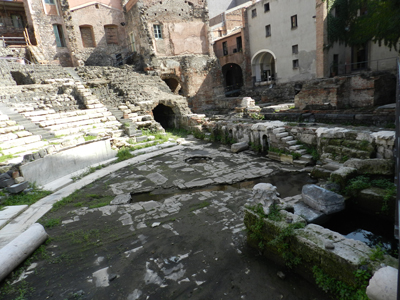 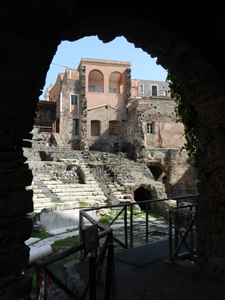 Close to the archaeological park of Syracusa we discovered an Archimedes Theme Park and in Ortygia an Archimedes Museum – both suitable for younger pupils. Between the awesome Temple of Athena inside the Duomo and the open air Temple of Apollo is the Syracuse 3D Reborn Museum. The fibre glass Riace Bronze A outside is rather sadly adorned with sunglasses and earphones, but the 20 mins film is actually rather good! 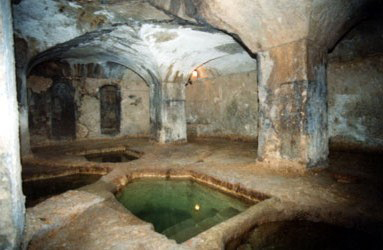 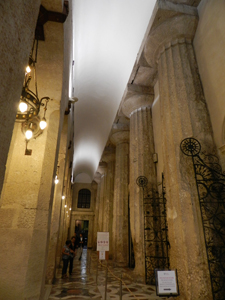 We were especially chuffed to visit the oldest European Mikvah (beneath Residence alla Giudecca/ Algilà Ortigia Charme Hotel). Originally Punic and Greek wells, three mikva’ot are arranged in a clover leaf pattern with two additional ones in adjacent rooms – with furnace. 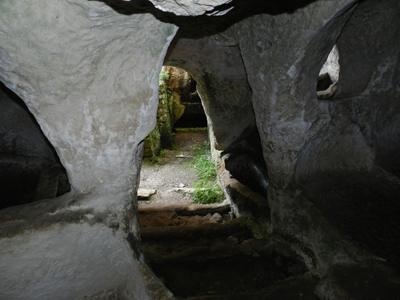 From Hotel Paclà (lovely setting in an almond farm near Avola) we visited the totally amazing Palazzolo Acreide. Ancient Akria offers a Roman Road, Greek Theatre and stunning labyrinthine Nekropolis whilst the modern town offers a clutch of Baroque Churches in its cultural centre and a host of pasticcerie in the modern.

Villa Romana del Tellaro is certainly worth a stop for the mosaics and although we couldn’t access ancient Helorus (in the Vindicari Nature Reserve), the uncrowded expanse of sandy beach offered a welcome respite to we modern visitors in contrast to those who perished in the Asinaro……….

The Baroque towns of Noto, Modica and Ragusa each deserve at least an afternoon’s visit in their own right, not just for Inspector Montalbano but also for the Hyblaean Archaeological Museum, Cemeteries and stunning settings. 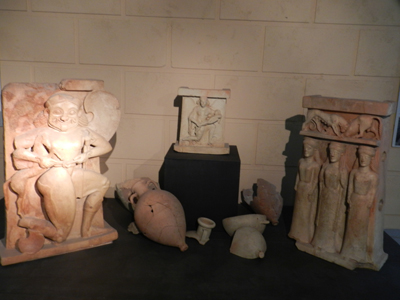 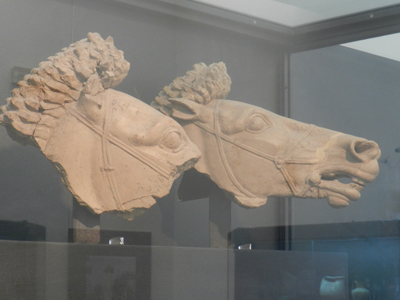 Gela Archaeological Museum houses some extraordinary exhibits, but until the Greek Acropolis and city walls are once more accessible, we doubt the detour worth while – nice packs of stray dogs though!

Seaside Marinella di Selinunte makes for a very quiet and sea- breeze-cool overnight stop, not least for it’s ten minute walk to the gates of Selinunte and 20 minute drive to the quarries of Cava di Cusa. 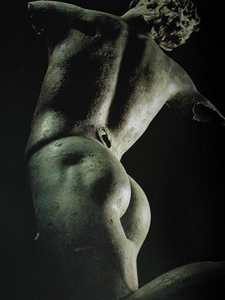 Mazara del Vallo may be renowned for its vibrant night life but it was exceptionally quiet when we visited Museo Del Satiro in the Mediaeval San Egidio. The Satyr is obviously in pride of place (along with a very impressive Bronze Elephant leg) and the accompanying 15 minute film describing its discovery and restoration was equally marvellous. I’ll never forget the sheer pride and joy of the fishermen in whose nets it was raised! 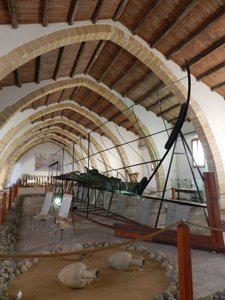 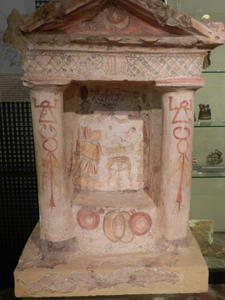 Marsala Archaeological Museum houses the most spectacular Phoenician ship and a large variety of Punic burials – including that of an 18 month old girl. 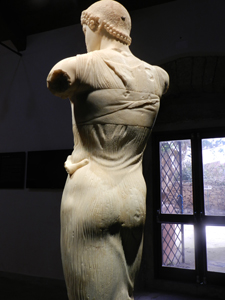 It’s always a pleasure to stay in the hill top Erice (Hotel Moderno is anything but, thank goodness!) and this time we even had time to visit the small archaeological museum and wonder at the carved Carrara marble ceiling of the Chiesa Matrice – a combination of Gothic, Norman and Middle Eastern design illuminated by a changing hue of pastel beams.

Isola San Pantaleo (Mozia) requires a full day trip from Erice or Selinunte but well worth it for the salt pans, windmills and salt museum on the mainland and archaeological remains and museum on the island. Now with a café, the island requires at least three hours to do it justice. Remains of the C8 BC Punic Colony consist of a military cothon, Necropolis, Tophet, housing (with mosaics), city walls, fortified gates and paved streets. The Museum houses the Charioteer. The small boats which ferry you across the lagoon have lifebelts but beware mosquitoes!

Hotel Sao Palo in Palermo offers excellent views from the roof top pool and external glass fronted lift. The excellent Archeaological Museum remains closed but the variety of architectural styles still makes the capital worth at least an afternoon’s visit. Choose from Teatro Massimo (the third largest opera house in Europe) offering daily tours; the sculptures of Quattro Canti junction and adjacent Piazza Pretoria and the Fountain of Shame; Roman domus remains nestling amid palm trees in peaceful Villa Bonanno; original Punic remains in the basement of Palazzo dei Normanni; open air markets; Duomo and plethora of churches and palazzos now acting as art museums for such treasures as the Mediaeval Triumph of Death in Palazzo Abatellis. 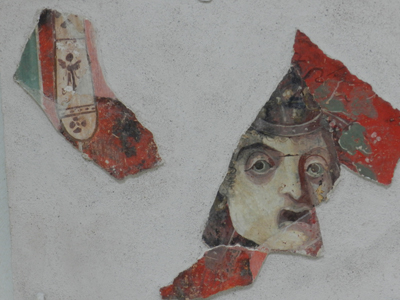 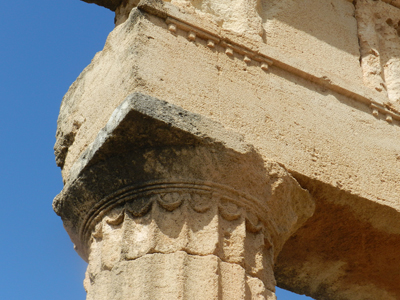 Excursions to Monreale and the Catacombs of the Capuchins are standard fare from Palermo (en route to/from the Airport) but we decided to investigate hill top Soluntum. Two good mini museums and a heck of a climb later we were rewarded with stupendous views but scant remains of theatron, stoa and cistern. Two houses are better preserved but the original mosaics are elsewhere.

If picnicking in Villa Bonanno gardens, do pop across and smile sweetly – it’s amazing what’s hidden in the secret corners of Palermo!