En route to the ARLT we stopped at Leicester to view the C2nd AD remains of Ratae Coritanorum/ Legorensis Civita. Column drums can be seen in the graveyard and reused Roman masonry in St Nicholas Church; especially around the two Anglo Saxon windows above the Romanesque Arches.

The Jewry Wall (originally identified as a Temple of Janus) is an impressive section of Roman masonry; alternating bands of red brickwork and local granite, limestone and sandstone. Three large Archways and alcoves overlook the remains of the town thermae, including three furnaces and comprehensive Information Boards. 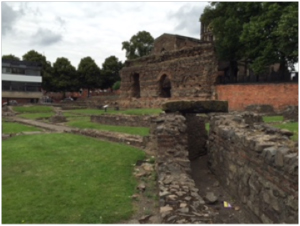 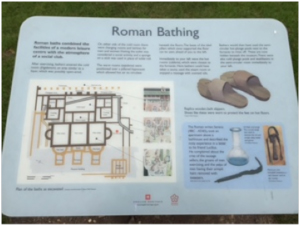 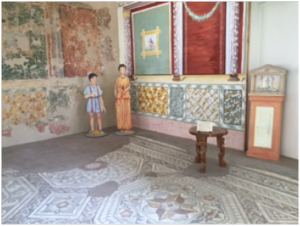 Market Harborough founded by the Saxons as hæfera-beorg (Oat Hill) may well be more notable as the HQ for the Kings Army and its proximity to the Battle of Naseby, but on our return from ARLT we were thrilled to discover the Hallaton Treasure housed in the R & W H Symington Corset Factory! 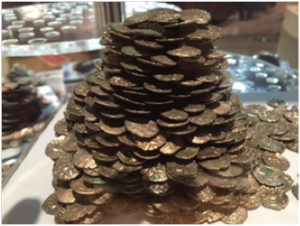 Discovered near the local village of Hallaton (close to the intersection of a local tribal route and the Fosse Way), the Treasure is the largest hoard of C1st AD British Iron Age coins to date and consists of over 5,000 silver and gold coins; 4,385 belonging to the local Corieltauvian Tribe and one Roman coin dated 211 BC – the oldest Roman coin to be found on these shores.

Also excavated was the Hallaton Helmet, a stunning sheet iron three-piece Roman Ceremonial Cavalry Parade Hemet for use in hippika gymnasea. Decorated with embossed silver and gold leaf representations of goddesses and equestrian scenes, it is one of the most complete discovered. Seven ‘spare’ heavily decorated cheek pieces were discovered within the bowl. 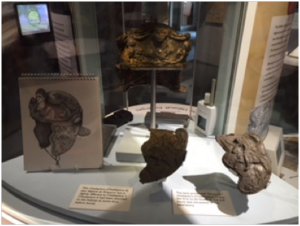 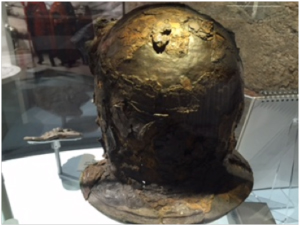 Additional discoveries within the hilltop palisade were a silver ring inscribed ‘TOT’ (Toutatis, a Celtic god similar to Mars), 7,000 bone fragments (largely porcine) suggesting large scale sacrifice and feasting and poignantly the skeleton of a dog thought to have been sacrificed and buried as an eternal sentry to the ritual site. 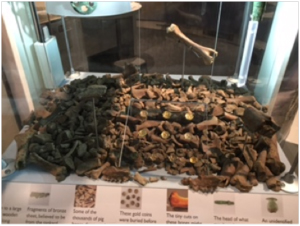 The combatants at the Battle of Naseby would doubtless have coveted the riches lying so near. Rupert of the Rhine may have been more interested in the presence of the Guardian Canine, having lost his beloved companion and warrior ‘Boye’ at Marston Moor the previous year…