Now that BA and easyJet have extended their flying dates into Crete…………..

One of the most vexing things about dealing with customer requests is having to say “No!”

Too often, because of the paucity of direct flights, do we have to ask teachers to rethink their Spring and Autumn plans because of the additional hassle of flying via Athens to reach Crete. School Trips are tiring enough.

The notoriously short ‘Cretan Season’ has now been extended and one can now catch some sun and visit outstanding Minoan Sites and Museums in Autumn Half Term!

Our visit was brief but eventful. Sites have been expanded and Museums refurbished.

The queues at Knossos were horrendous BUT using our free passes we skipped directly to the front. As with so many sites, gone are the days when one could wander through at will. Nevertheless, amid the Evans’ concrete ‘vanity park’ there still shines through a sense of Minoan wonder; the sacred horns, throne room, processional way, magazines, central courtyard, light wells and colourful frescoes, no matter how heavily restored! Younger pupils will always be fascinated by the mythology. Older students will engage in the archaeological ‘reconstruction/authenticity’ debate; and there still remains enough of the authentic in situ to fuel that debate. We particularly appreciated the viaduct, portico, sacred springs and caravanserai lying across the Vlychia stream bed beyond the main site on the southern approach. Few seem to venture that far.

Heraklion itself has undergone a revamp too with an expansion of trendy but reasonable eateries near the museum, far more decent shopping and pedestrianisation than I ever recall; even the market seems cleaner! The refurbished C16th Bembo Fountain and Turkish Pavillion on Plateia Kornarou now offer an additional place for coffee and people watching, thus relieving the overcrowding of the cafes around the Morosini Lion Fountain.

For those feeling nostalgic, old Heraklion is still to be found in the back streets I’m pleased to say; but it’s fast disappearing.

There is little reconstruction at the Palace of Malia, but a great deal of expansion! Very quiet compared to Knossos, now with a decent café and a  huge contrast to the nearby holiday resort. We spent an easy two hours of exploration, particularly the workshops of Quarter Mu with remains of staircases, doors, windows, cupboards and wooden beams. A fantastic addition to the oft viewed magazines, crypt, Kernos, monumental staircase and central courtyard which can make a Minoan visit, for some, repetitively tedious. Here we see a glimpse of the ordinary day to day, the behind the scenes activity which made the religious and monumental ‘tick’. 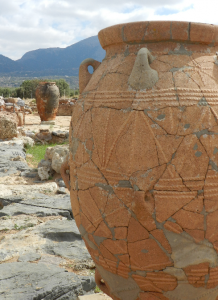 Further along the coast we came across the small Minoan site of Nirou Chani, a possible andreion initiation venue. Now closed to the public but easily viewable, it’s a good seaside stop off after a hard day at Knossos and Heraklion.

The undoubted highlight of our long weekend was the brand new Eleutherna Museum, near Rhethymnon, two hours from Aghios Nikolaos. Since opening in June, this museum for Homer in Crete has received over 30,000 visitors and is stunning! The picture perfect nearby village of Margherita must be receiving a much needed tourist boom.

No photography is allowed, so please see the following:

Eleutherna, the heart of Crete

Eleutherna, an exemplary museum to open in Crete

The Museum’s website can far better convey than I the importance of the exhibits, but please forget the traditional standpoint that much in Homer is literary and dramatic convention. This is hugely important!

Excavations are ongoing, thus the massive Site is closed to the public for the foreseeable future; but we may, just may have wriggle room……………..

As ever, huge thanks to Manolis, Inga and Emily of Alma Tours, Aghios Nikolaos. Happy Anniversary!