Capital of the Dodecanese, Rhodes offers far more than picturesque Lindos and anecdotal tales of the Colossos.

Originally settled by the Minoans, the island’s strategic position led to numerous invasions by Mycenaeans, Dorians, Romans, Crusaders, Ottomans and Italians – most of whom have left visible architectural marks of varying quality.

We first visited aeons ago, courtesy of Thomsons Flight Only and a legal loophole (now firmly closed) of compulsory inclusive free accommodation. We stayed with a charming family in delightful Afandou (the hidden place) and returned many times, our last being in 1997 to view Hale–Bopp Comet in a village sky free from light pollution. Thereafter, we sadly lost touch. It was time to return… 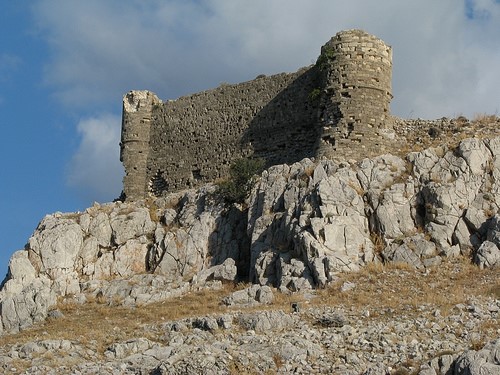 Earlier this year we stayed in the fishing village and fledgeling resort of Haraki. Our studio flat overlooked a tourist-free pristine beach with direct views across the bay to the Akropolis of Lindos. The ancient Akropolis and Crusader Castle of Feraklos and the wild mountain sheep, which congregated there at dusk, in turn, overlooked us. With only a handful of bars, fewer Tavernas and a tiny Orthodox chapel, it was a calm place to return each evening.

At Lindos we parked beneath goat inhabited caves by St Paul’s Bay to begin our ascent. The Hellenestic Theatre carved into solid rock on the lower slopes includes a circular orchestra and remains of seating in a very steep cavea with narrow diazoma.

The narrow streets are ‘paved’ with intricate pebbled mosaics, flanked by C16th and C17th Merchants Houses, highly decorated doorways and archways. Many traditional houses have been converted into holiday lets and bars. Do stop – the one we chose also contained two Roman altars! 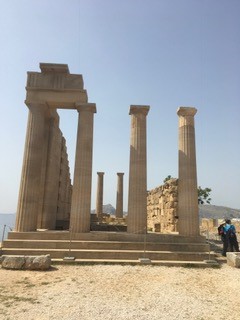 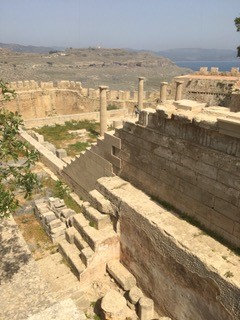 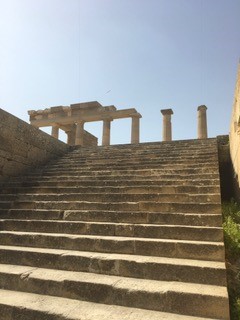 The Akropolis is dominated by the remains of the Temple to Athena, monumental staircase, propylaea, stoa, defensive walls and Castle of the Knights of St John; marble bases and epigraphic blocks scattered randomly throughout. The views are stupendous, encompassing the surrounding harbours, coastline and remains of Lycian Tombs on Achokrateio. 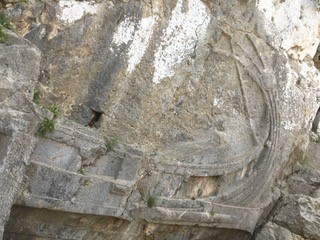 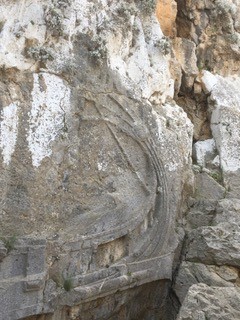 The most impressive piece of archaeology in situ, however, is the famous rock-cut Trireme by Pythokritos(sculptor of Samothrake Nike) c.180 BC. Originally painted and guarded by bronze railings, a statue of General Hagesander once stood upon the bow. It is an extraordinary piece of work.

An easy 2klm hike takes one away from Lindos proper, past a windmill and to the Tomb of Kleoboulos.

Rhodes Old Town is a multilayered, multi-era time capsule of twisting cobbled alleyways encircled by a moat and defensive walls of the Knights of St John. Enter through any of the Seven Gates and one is assailed by throngs of Tourists and aggressive commercial enterprise, the ancient Hippodamian grid plan no longer evident. Amongst the myriad Mediaeval, Ottoman and Jewish remains, Hellenistic remnantscan be found at the Collachium and Temple of Aphrodite. The real joy, however, is the Archaeological Museum in the Hospital of the Knights, in which one could spend days, not hours! 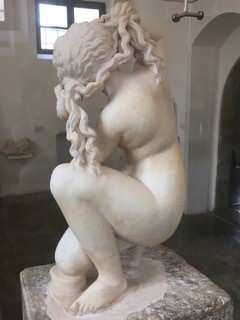 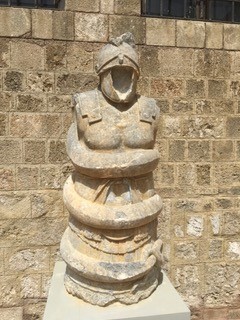 The vast collection is split between an inner courtyard, upper floor of multiple rooms leading off a timbered balcony and onwards to a garden complex, lush vegetation interspersed with fountains, pools and further archaeological artefacts. 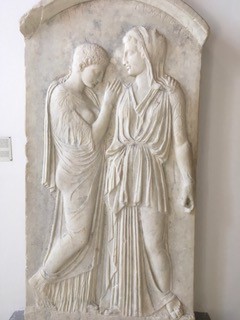 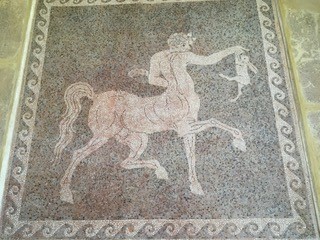 The collection comprises of finds from neighbouring islands and Sites across Rhodes itself. Geometricthrough Mycenaean, Archaic, Hellenistic and Classical Greek to Roman. Statuary, grave goods, mosaics, jewellery, metal work, stele, epigraphy, ceramics, animal figurines, imports from Laconia and Egypt – all quite mind-boggling. The kneeling Aphrodite statue may be the most famous exhibit, but that which remains foremost in my mind is the small crude terracotta relief of a blinded Polyphemus and his ram, the head of Odysseus just visible between its front legs – a grave good for a young boy. 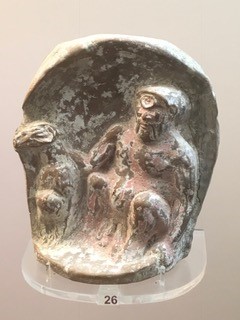 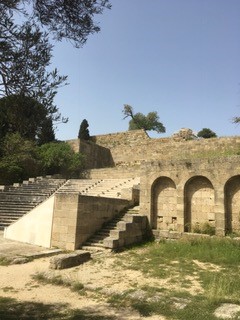 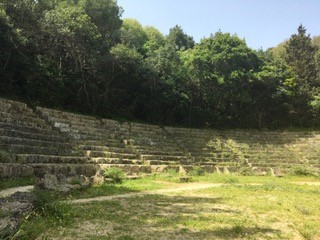 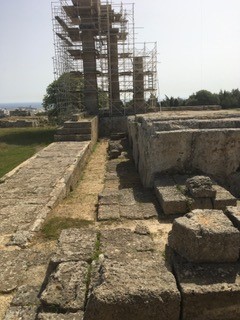 Needing a respite from the contrasting relative calm but heady museum collection and cacophony of the streets, we headed to Rodíni Park (purported site of the famous Ancient School of Rhetoric now occupied by peacocks) and almost deserted Acropolis high above the Old Town and Mandraki Harbour. Here we found the three remaining columns and stylobate of the Classical Pythian Apollo Temple, remains of that of Athena and Zeus Polias, Artemesion and reconstructed Odeion, Stoa and Stadium with thrones, drainage channels and turning post. Little remains of the Gymnaseum and Library complex but a variety of chamber tombs and Nymphaea can be found scattered around the location of Monte Smith. It takes some hunting but the Necropolis of Korakonero is worth the effort for a selection of cist graves, rock-cut chamber tombs, vaulted masonry and subterranean quarry. Excavation is ongoing. 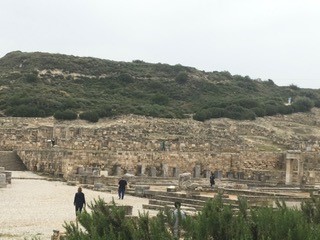 Doric Kamiros first minted coins in C6 BC but was destroyed by an earthquake in 226BC. The three tiered terraced city runs dramatically down a cliff overlooking the sea. The largely Hellenistic remains include the Acropolis and Doric Temple of Athena, Cistern (serving 300-400 families), Stoa, Altar, Fountain House, Agora, Apollon Temple (with possible fiscal pit), Peribolos of Altars dedicated to various deities (including Agathos Daemon, Artemis, Zeus, Poseidon and Helios). A monumental stone staircase leads to the residential area built on the Hippodamian Grid plan and consisting of both Hellenistic and Roman houses with peristyle courtyards, mosaic floors and painted plaster. There is also a Thermae with hypocaust. The whole area is scattered with epigraphical votive and statue bases – presumably, the remnants of the 3,000 works of art looted by Cassius as reprisal for the Polis siding with Marc Antony. 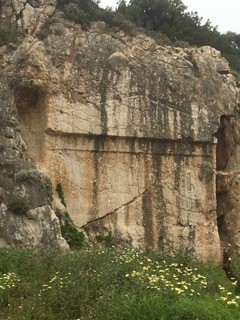 Nearby Kato Kamiros, a tiny ferry port, boasts several fabulous fish Tavernas one of which has two Lycian Tombs overlooking its outside toilets!

Near the airport lie a Minoan settlement at Trianda and the Mycenaean settlement of Achaia. Nekropoli of that era have been located in nearby hills. 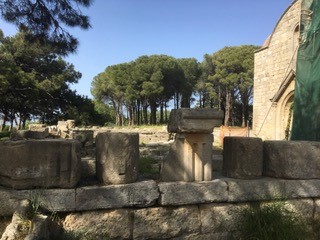 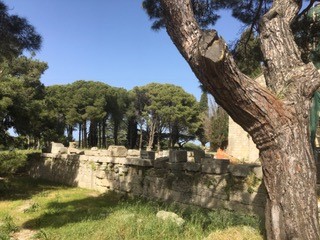 Also in the vicinity lie the Classical and Hellenistic remains of Ialysos, the third of the Dorian Cities, onFilerimos Hill – home of Olympic Champion Diagoras. Italian excavations revealed Temples to Zeus and Athena Polias, an amphiprostyle Doric temple, cult statue foundation, early Christian basilica, small subterranean Byzantine church and fortifications – all still visible. The Doric Fountain House is sadly inaccessible but multilingual photographic info boards partially compensate. Dominating the surrounding peacock filled park is the Church of the Panaghia and Monastery both incorporating much spolia from the Athena Temple. A Greek Wedding was in full swing when we visited, guests and other picnicking families taking full advantage of the extensive grounds.

Central Rhodes is mountainous but verdant. Traditional stone built villages have resisted breezeblock incursion and hold wine festivals. Hiking is popular as are the Nature Sanctuaries such as that of Seven Springs and the Valley of the Butterflies – we even chanced upon a roadside organic fruit juice and milkshake bar near Kritinia Castle; the attached Folklore Museum contained Larnax and inscribed Stele. 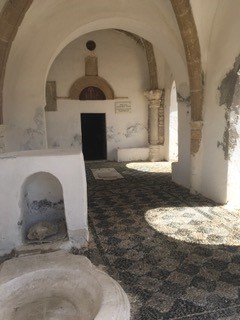 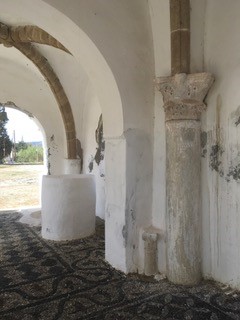 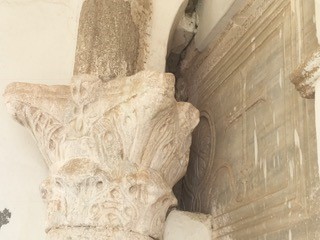 Rhodes is famed for its pebble mosaics and numerous Chapels.

We particularly liked the C19th Chapel at the end of the relatively unspoiled Plimiri Beach. Dedicated to Zoodochos Pigi (Life-Giving Spring), it was purportedly built upon an ancient temple, of which architectural and marble capitals are preserved inside. The basic Fish Taverna next door was good too! 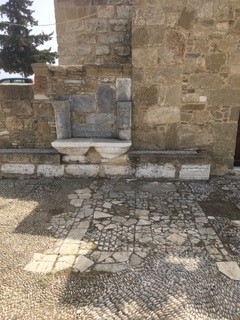 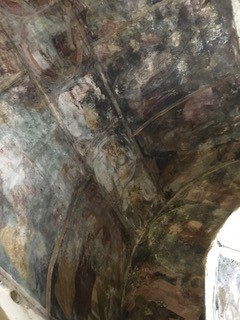 Our favorite Chapel Panagia Katholiki lies between the beach and town of Afandou. Built upon an early Byzantine Church that in turn was built upon a Temple to Demeter, archaeological spolia is still evident. The frescoes are superb as are the exterior pebble mosaics.

Ah……..What of Afandou and our host family of over twenty years past? The village is now a town with Golf Course and Tourist Train (!) but we remembered the route into the back streets without names, found the original house above which we had our studio flat – and shouted into the courtyard. The elder daughter appeared from the kitchen, white as a sheet as she whispered our names.  Both sons (now in University) hauled out of bed, cakes and coffee instantly appeared, telephone calls made to incredulous family members, plans made for a reunion at the ‘new’ house the following day; and what a reunion it was! Φιλοξενία at its very best – grandchildren, husbands, brother, sisters, sons, grandparents, fassolakia and ouzo, photograph albums, kisses, tears and much reminiscing. We shall not be losing touch again!  Ευχαριστώ πάρα πολύ!

The Mosaics of Rhodes, Greece by Helen Miles

A disordered but thorough compendium of individual archaeological monuments