The Joys of Roman Spain

I took the one less travelled by, And that has made all the difference.

Having just returned from a school Classics trip to Spain, I can highly recommend the ‘path less travelled’. While it would be a shame to rob pupils of the chance to visit mainland Greece or Rome, we plan trips there in alternate years in a four-year cycle (how very Classical!), leaving us to explore the rarer sites in the ‘off’ years. And it doesn’t get much rarer than South Western Spain (at least unless your school risk assessment can cope with war-zones!). 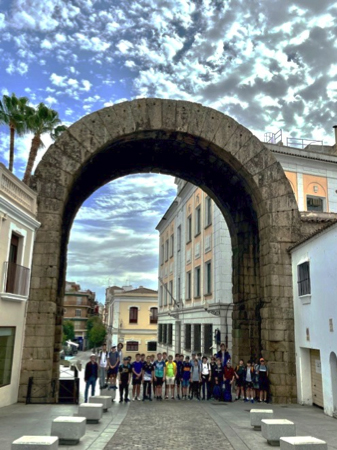 I first contemplated a trip to this region leafing through the Oxford Archaeological series book on Spain (rather out-of-date and in need of a new edition); as I explored the sites further, I discovered that Spain has not been covered well academically in the UK, with most of the digs under Spanish leadership and without a history of foreign institutions getting involved (no British School of Seville, as at Athens or Rome); perhaps a further contributing factor is the lack of connection between the literary sources for the area and the archaeological material of the sites themselves, so that academics interested in literature-based historical study are

not naturally drawn to the area. (However, I would recommend John Richardson’s book on Roman Spain, which along with Fishwick’s book on Merida and Tarragona is a lonely beacon of UK-interest). 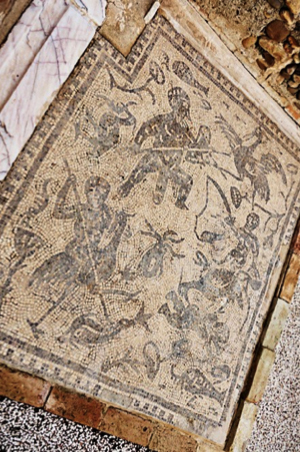 This is all a terrific shame because the sites are amazing, and actually, once you get into the historical/literary connections there is plenty to put the sites into context. While there are plenty of excellent sites across Spain, they are pretty spread out; combining them might prove impractical for a school trip. However, Seville and Merida were reasonably close to one another with enough further sites nearby to furnish a five- night trip. 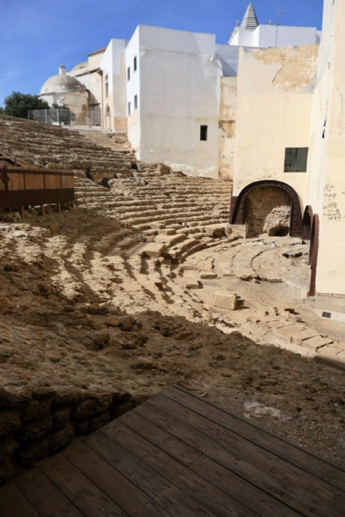 The first port of call on our trip was Cadiz, (Gadir to the first Phoenicians). Their settlement here allows the current inhabitants to claim it as the oldest city in Western Europe. Cadiz is the gift that keeps on giving archaeologically, something that must prove a nightmare to anyone wanting to build anything in the old city: many archaeological sites have recently been struck upon completely by accident when foundations were being dug for new buildings, including a Phoenician fish-salting factory (for the garum-lovers out there!) and a third of a theatre, now tucked picturesquely within whitewashed houses. The theatre was part of the development by L. Cornelius Balbus, alumnus of Cadiz, controversially gifted Roman citizenship in 72BC and good mates with Julius Caesar; he didn’t just build a theatre in Rome in 13BC but also exported the idea back home to Cadiz, starting off rather a trend in theatre-building in the area (we saw five in total during the trip). 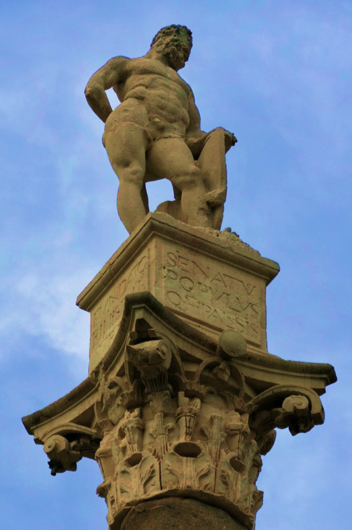 Seville (Hispalis to the Romans) was an important city at the mouth of the river Baetis, controlling an area that (along with the East coast of Spain) came under the control of Phoenicians early on, and later the Carthaginians. The final battle of the Roman conquest of Spain, wresting the area from the Barcids, took place nearby at Ilipa in 206BC. It was to keep an eye on the natives back in Hispalis that Scipio created a colonia of veterans at Italica. This was to have important consequences for the future of the Roman empire, While Seville has odd patches of Classical interest (e.g. the houses under las setas, columns dotted about and a good museum that has been closed for far too long – it remains to at the time of writing), Italica is impressive both in the quality of its mosaics and the wonderful amphitheatre that featured in the Game of Thrones series. 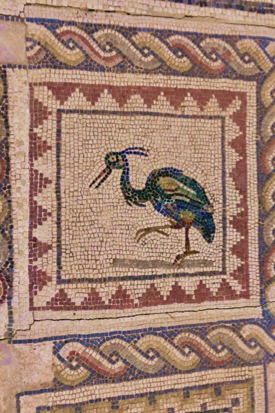 Trajan is the great alumnus of Italica (and Hadrian was of a Italian family, though not born there); presumably they descended from veterans of the battle of Ilipa. Hadrian piled huge amounts of money back into Italica (like Balbus for Cadiz, only more so), creating the ‘new’ town (which is what is excavated today, the old being under the town of Santiponce) and the amphitheatre; at a capacity of 40,000 it was too big for the town (of perhaps 10,000), but shows the wishful thinking of Hadrian. Poorly preserved is the Traianeum, the temple to the deified Trajan, which was clearly a focus for this new (very posh) town. It featured the biggest bathhouse known in Spain (although not particularly well-preserved), and some very large houses, which may have reached three storeys in height. The birds mosaic alone could occupy my attention for a long time – budding ornithologists can attempt to name the 35 different species depicted. We took a stroll down to the theatre (in the old town), sadly open only for shows; it should certainly be on UNESCO’s list of sites to adopt. 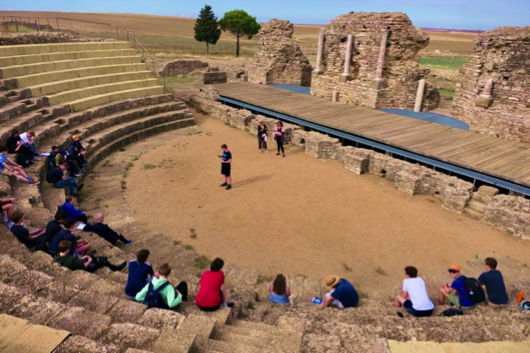 A quick digression on theatres, as we saw two more somewhat off the beaten track, first at Casas de Reina (Regina Turdulorum, the local pre- Roman tribe being the Turduli, who along with the neighbouring Turdetani were disparaged by Livy as the least warlike of the Spanish tribes). It used to be on the axis of the roads linking Seville and Merida, and Cordoba and Merida, but now is most certainly in the middle of nowhere; we discovered that our group constituted over 1% of the entire yearly visitor numbers. The theatre, however, is well preserved and the findings suggested a thriving imperial cult even here. Even better as a theatre (and with a more fun story) is Medellin, named by Quintus Caecilius Metellus after himself (he wasn’t bashful: he named several places after himself: vicus Caecilius, Caeciliana and castra Caecilia, which is modern Caceres); he was an important general in the war against Sertorius and was granted a triumph alongside Pompey in 71BC. He also produced his own coinage with QCMP (the ‘P’ is pius; the name added because of his duty towards his father, getting him recalled from banishment by the followers of Marius). 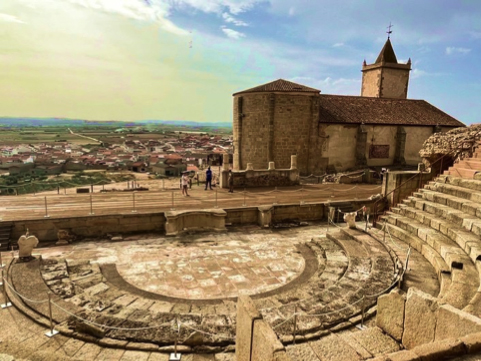 All typical behaviour by a late-Republic politician/general. He is responsible for turning this hill-side town into a little- Rome, with its own theatre perched on the hillside, 50 years older than the one in Merida, down the road. Indeed, the changing nature of Spain can be seen in the movement of towns from a defensible position in the foothills of the Sierra Morena (e.g. Medellin) in the 70s BC, when Spain was definitely still a war- zone, down to the plains by the 20s BC when Merida was settled under Augustus following the Cantabrian war. The theatre itself has a beautiful view that almost defies the knowledge that, as of every Roman theatre, and unlike Greek theatres, the scaenae frons behind the stage entirely blocked it out! Go up to the castle above for a great view down into the theatre. 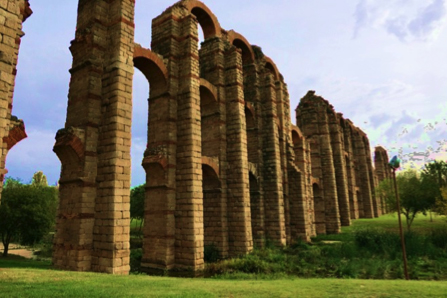 And so to Merida, Emerita Augusta to the Romans, meaning ‘the veteran town built under Augustus’. Augustus had set it up after the Cantabrian war against the tribes of northern Spain, a very dirty war lasting 10- years and requiring eight legions; two of them, the fifth alaudae and tenth gemina, raised by Caesar in Gaul but then on Antony’s side against Octavian, had not been not forgiven despite good service in Spain; their veterans were settled as far away from Rome as could be, guarding the ‘silver road’ from the mines in the Asturias to the port of Seville. This is a town with everything that could be bracketed under the label ‘what the Romans did for us’. It certainly deserves a couple of days; some sites are entirely free, and all the others can be entered under a reasonably priced all-inclusive ticket. It is a great place for walking around and getting a sense of the street-plan of a castra which became a town; the cardo stretches north-south from the modern plaza de toros (and nearby a posh 1st century BC house, the so-called house of the Mithraeum, and a necropolis), past the temple of Diana (which had nothing to do with Diana) at the corner of the old forum, under the arch of Trajan (which had nothing to do with Trajan but marked the entrance to a forum of the imperial cult), and finally out next to los Milagros, the miraculous aqueduct and smaller Roman bridge. 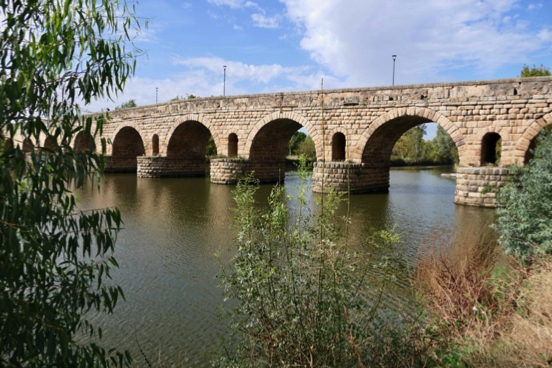 The decumanus, on the other hand, travels from the west across one of the best- preserved Roman bridges anywhere (a good view is from the alcazaba fortress), alongside the modern plaza de España and passes out next to the Roman hippodrome to the east. The town itself still feels about the same size as the Roman one, with poky streets that mimic the width of the original ones. 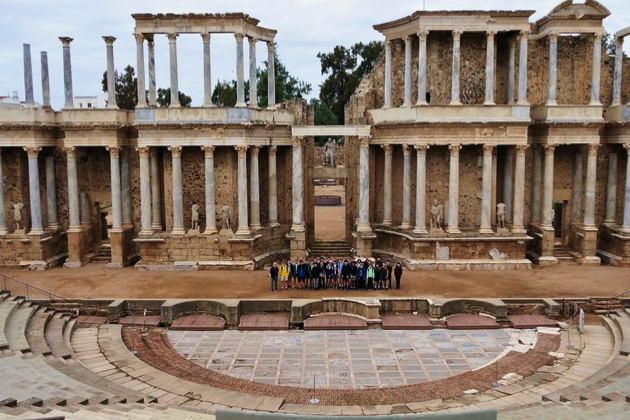 Merida’s theatre is one of the best in Europe and, unusually, sits right alongside the amphitheatre in the ancient equivalent of an Olympic Park. Inscriptions show that the theatre’s sponsor was Agrippa, who was important to Augustus’ victory in the Cantabrian war (Augustus himself being not so useful as a commander). The scaenae frons is well-preserved and the post-scaenium area (porticoed courtyard behind the theatre) was not something I’d seen before. The amphitheatre too was particularly interesting for the fact that it abutted the city-walls and therefore needed to solve the problem of restricted entrances (a lack of vomitoria!); this was ingeniously solved by towers allowing access from outside the walls. Beyond the walls was another posh villa with some lovely mosaics, one featuring a trio treading the vintage and another a collection of different fish. 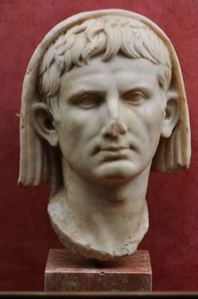 Merida museum was our only big museum on the trip (the one in Seville being closed), but it is a superb museum and a beautiful building in its own right (the bricks and arches of the central hall reminiscent of the opus latericium style). The bays off the central hall are themed ‘religion’, ‘entertainment’, ‘burial’ etc., and the huge mosaics run up the walls, so that they can be viewed from the ground, first, or second floor. There is also an almost perfect bust of Augustus veiled, a copy of the via Labicana type, and an interesting collection of coins. Head downstairs to the crypt to see a length of Roman road and an unusual four-way sarcophagus. 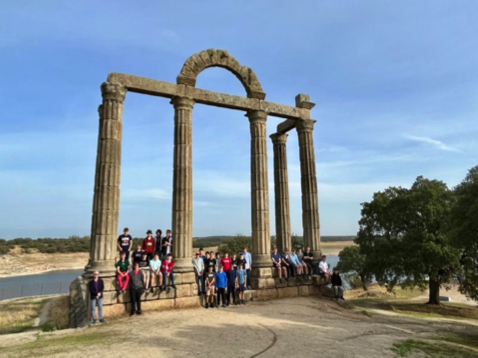 On our trip back to Madrid to fly home, we made a virtue out of the necessity of a long coach journey by stopping off at Bohonal de Ibor, a collection of columns and a temple front seemingly randomly beside the road on the banks of a huge reservoir built under Franco. The original town of Augustobriga had been in the valley, but the remains were carefully removed from the threat of flood-waters and transported to a picturesque bank amid the Spanish oak- trees; a very tasteful (if historically inauthentic) example of anastylosis, and good fodder for the trip photos.

As often occurs with trips, there were things we missed out that I would have loved to have seen. The Monday off-day in Spain (when sites are cerrado) was a pain, and meant we didn’t get to see Baelo Claudia (beach-side Roman town); I’d recommend travelling on a Monday, if you can. Even so, the five-night trip was full of exciting sites. Credit should certainly go to Hellene for being willing to step into the unknown, enabling an ambitious itinerary, and sorting out great hotels and guides for us. 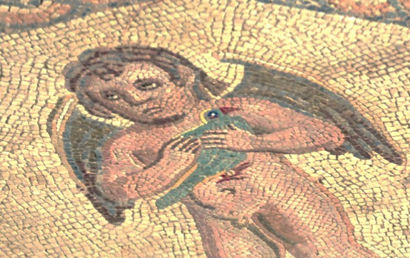