A flying visit to Rome and we hit the jackpot ‘road testing’ a Hotel – the amazing Grand Hotel Gianicolo!

We should have heeded the whispering in our ear “Remember thou art mortal……”- Yup! We had the ‘in process of renovation room’ and the fridge door came off in my hand. Trials and tribulations……… 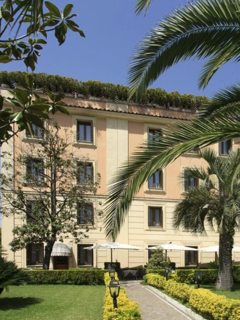 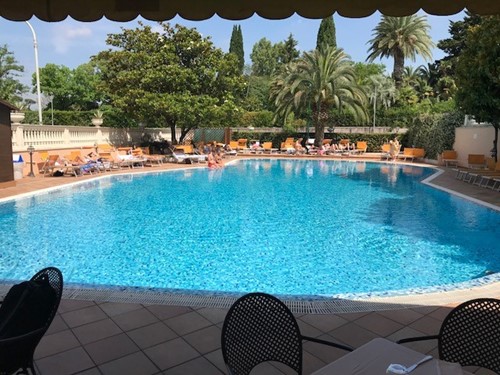 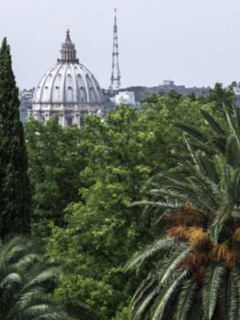 Eschewing the temptations of the pool we headed off on a partially fruitless search for the Roman Water Mills. Some lovely pictures here and more information from Janiculum Mills Excavations here.

A small section of Aqua Traiana may be glimpsed behind Fontana dell’Acqua Paola (Il Fontanone) built from remnants of Nerva’s Forum Minerva Temple but most lies beneath the American Academy. 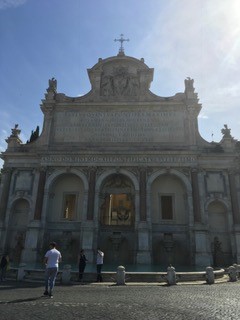 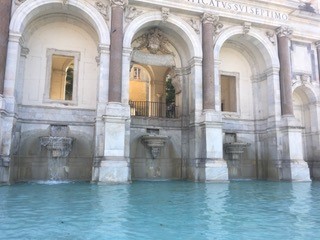 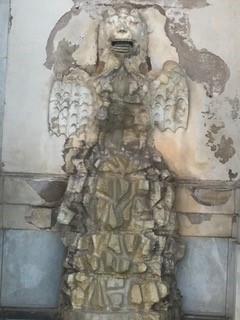 Nevertheless, we had huge fun hunting and almost convinced ourselves we’d spotted remnants at the top end of the Botanical Gardens.

The nearby Garibaldi Mausoleum Ossuary was surrounded by film crew using the most amazing vintage hearse! 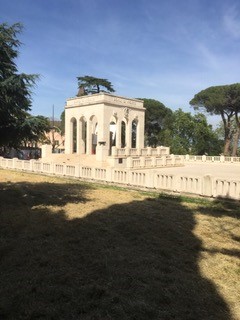 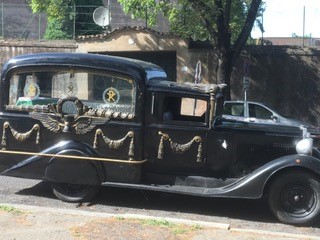 Views across Rome from the top of the Janiculum are astounding, as is the Garibaldi Monument – even though few could recognise it in one of the regular quizzes, nor identify his connection to Tyne and Wear and biscuits! 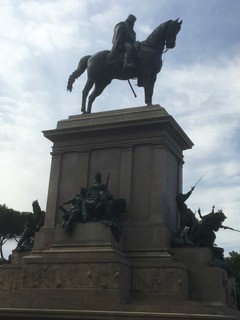 “No guesses yet! Anyone? Clue…..raisen panini”

“I will admit to having looked this up earlier as no-one was getting it. It’s the statue of Garibaldi on the Gianicolo”

Passing a Roman Water Board building housing still-in-use Roman Cistern, we returned to Trastevere for Osso Buco and Fagioli Verdi at the unassuming but fabulous Corrado Ristorante, via Della Pelliccia.

Day Two saws us at Portus and Isola Sacra Necropolis with takeaway lunch (tempura courgette flowers, whitebait and calamari) in Fiumicino on the Claudio-Trajan Canal extension – just missing the dredging of a two tonne Amphora! 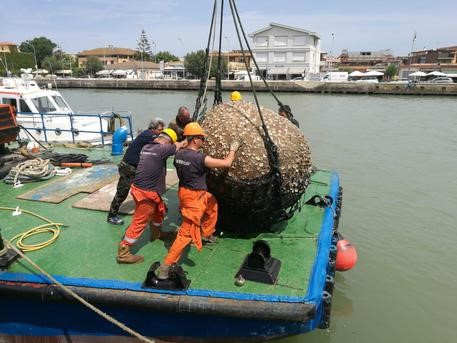 Isola Sacra has darned awkward opening hours but should be included in school trips if at all possible! A small site with breath-taking tombs we spent over three hours, but 60-90mins should suffice. 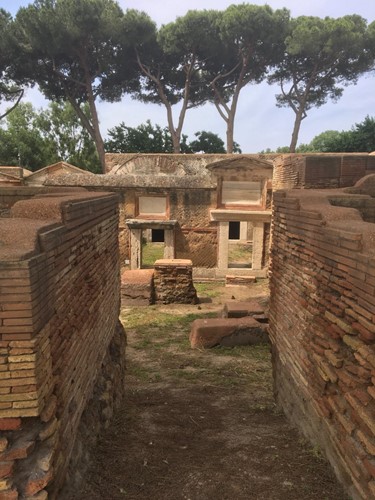 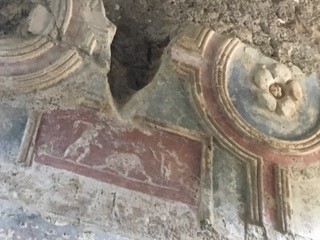 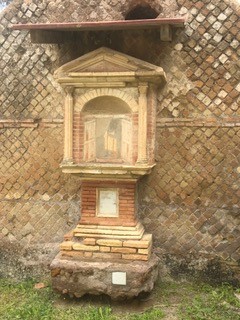 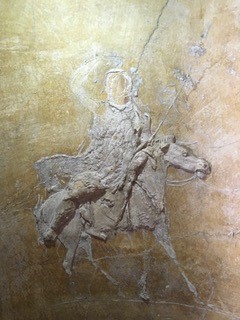 We cannot rate this Nekropolis highly enough. A few photographs will not do justice – so please read these threads!

Seafaring and trade with a rather good crocodile and hippo mosaic

For more info see – The Tombs of Ancient Ostia and an interactive plan of the north part of the Site.

When the initially grumpy Guardian realised we weren’t ‘with the other group’ he couldn’t have been more charming; ensured we hadn’t missed any hidden gems, introduced us to his wood carvings, his dogs and …………. most amazingly of all………opened up the three warehouses! 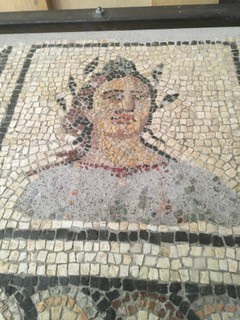 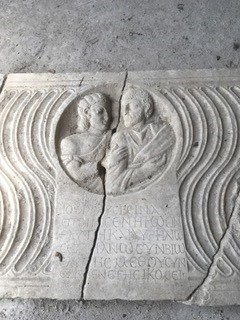 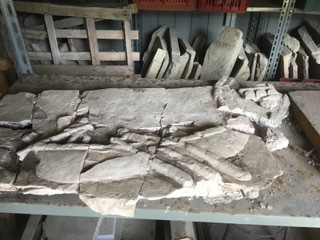 Join us for a highly privileged, supervised peek inside the Warehouses of Isola Sacra.

He also described the recent discovery of c.13 skeletons with abnormal inner ear bony protrusions. Research is ongoing but the excess growths are believed to have been caused by repeated deep sea diving!

After such an intense visit, a lengthy walk around Portus provided a welcome respite. Airy, well signed, with a fascinating wealth of warehouses and walls, columns, harbour and inner docks, we spent a good few hours following the signposted paths. 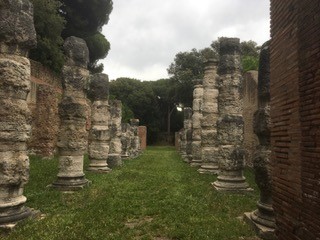 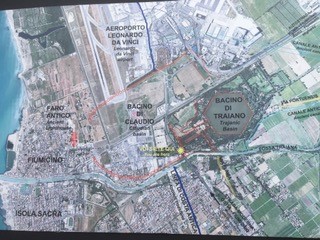 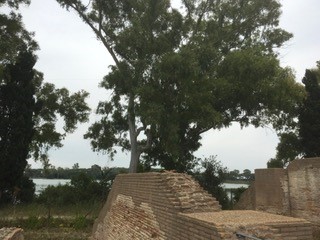 A Portus Perambulation! With excellent signage, maps, info boards and clearly marked walking routes. An oasis of calm near Fiumicino. Sign in and pick up the free maps before you begin!

Also, have a look at the University of Southampton’s Portus Project.

Where were we exploring?

Any guesses as to what the Spanish School are excavating?

We are not sure whether dedicating a whole afternoon to Portus would be time well spent on the average School Trip. Fascinating as it is, excavation is ongoing and as yet it is not entirely ‘user friendly’ for the average pupil, without a specialist guide and a great deal of tailored input by Teaching Staff.

Nevertheless, should you find yourself with some spare time whilst near the Airport, do consider it.

Excitingly, there are plans for a Tiber boat trip from Rome to include Portus, Isola Sacra and Ostia Antica! 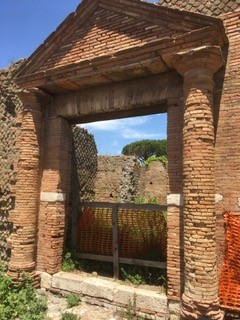 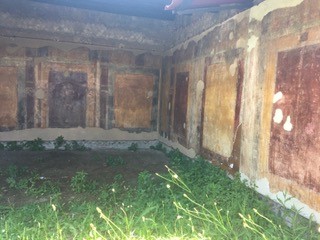 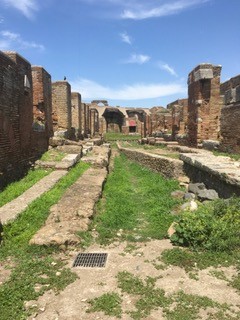 The Site is so huge we’ve only ever managed to tackle sections in 4/5hr incursions; it really needs a whole day. This being our fifth visit, our intention was to bypass famous landmarks and head for the far reaches, taking in as many of the 18 (?) Mithraea as possible.

A gloriously sunny day at Ostia Antica as we leave tourists behind and head for the less frequented areas….but first to pass the lock gates.

Inevitably, we became side tracked and only managed two –

The latter provided a quiet, cool place in which to catch up on work emails!

Stopping briefly in Ostia (worth exploring in itself), we quaffed a cold beer and made a dash for the Airport.

A sweetie from Ostia Antica gift shop with some mosaic table extra.

As ever, huge thanks to Maurizio, Gabriella, Monica and Pietro of Allegro Travel for their hospitality, advice and transport.