Samos – a masterclass in tunnel engineering…

Home to Pythagoras, Samos island has featured in many a pivotal moment in Greek history; Persian, Peloponnesian and Greek War of Independence.

Its close proximity to Asia Minor doubtless contributed to it being a cultural hotspot as well as a military one.

Unsurprisingly, having hosted many a navy (Persian, Egyptian, Greek ancient and modern) Samos is blessed with multiple harbours and good bathing. We eschewed the more popular sandy beached resorts in favour of Ormos; a small, quiet, traditional port and original Spartan cleruchy. It proved an excellent base for touring the verdant island, nowhere being more than an easy 90-minute drive. 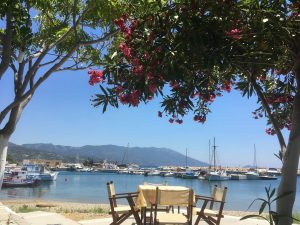 One approaches the great Heraion Temenos (purported birthplace of the goddess and 300 year long honeymoon!) by a beautifully paved Sacred Way lined with numerous votive structures such as the colossal marble Kouros and Geneleos Group. Both are now in the Vathi Museum but replicas (Kouros feet only, Geneleos entire) give a clear indication of the Sanctuary’s original opulence and grandeur. 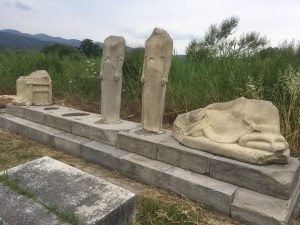 Hera worship began with the Mycenaeans and continued well into the Roman Empire, but decimated by fire and much plundering only tantalising fragments now remain of the once vast site. Fragments however which provide much evidence of Temple planning and development.

One half column still stands of the Temple considered by Herodotus to be the largest in Greece, but the remains of the stylobate support his claims. The Tripteral Temple (in emulation of Artemis at Ephesus) of the Tyrant Polykrates followed the ground plan of its Rhodikos predecessor with 155 columns of differing orders. The Great Altar, unusually on a NW/SE axis, has highly decorated antae capitals. Nearby lies the base of the Myron statue ‘appropriated’ by Marcus Antonius. 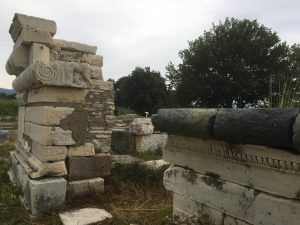 Remains of an Exedera exist, dedicated to Cicero (presumably in thanks for not bankrupting them!) also remains of Hecatompedon I and II and a rather enigmatically named ‘South Building’.

The former are the oldest buildings on site and housed the cult statue; oblong, originally of mud brick on stone stereobate, C8th BC central wooden columns, C7th BC wooden peristyle.

The C6th BC South Building also with a central colonnade, lies on a NW axis but the peristyle is not continuous. Tentative theories imply the Xoanon Cult statue was thus visible but protected from the elements by a facade between two antae.

Falling tourist numbers means the onsite café is no longer financially viable, but the toilet block is immaculate and the café courtyards are positively heaving with architectural fragments and inscriptions!

The road connecting the Heriaon to Ancient Samos (Pythagorion) passes through a Wetland Sanctuary providing glimpses Polykraton Defensive Walls, Agora, Stadion and Thermae. All are overgrown and closed to visitors (we did try!) – which of course is great for the wild life!

Pythagorion is a busy, well laid out tourist venue encircling the famous ancient harbour now lined with Tavernas – of course we ordered beans! The modern statue of its most famous son dominates the mole, his outstretched arm completing the right angle, the hypotenuse inscribed with his theorem. 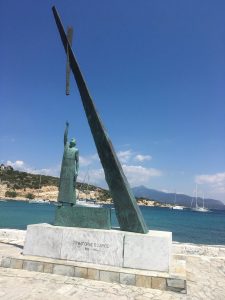 We spent a whole day searching for ancient remains. They are there but you have to hunt between housing, behind tavernas, beneath the Cathedral and around the public car park, bus station and Castello. Tourists walk pass in oblivion. 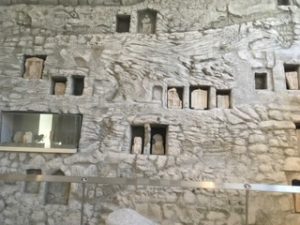 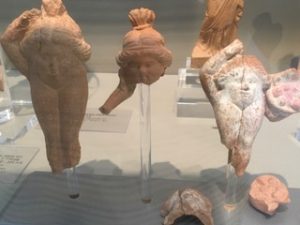 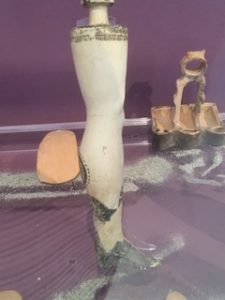 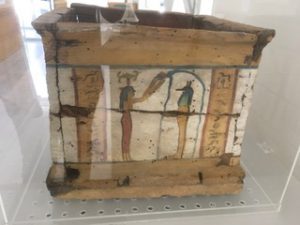 The exterior of the museum has been excavated to reveal roads and housing of the original Greek and Roman City. Mosaics, peristyles, columns and kitchens are all on display. Perhaps here, once walked Alkibiades! 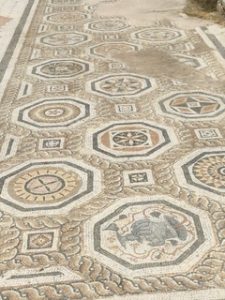 A short distance outside Pythagorion is the Theatre (reconstructed venue for concerts) and amazing Tunnel of Eupalinos.  Recently reopened, this C6th BC subterranean 3,399 foot long tunnel and aqueduct is a marvel of surveying and engineering. Had not it been cited by Herodotus its discovery remains doubtful. Booking is essential and three guided tours are offered: short, midway and entire length to the quarry and Spring of Agiades. Hard hats are provided, torches are advantageous, a flexible back and narrow girth essential!  “Eupalinos, son of Naustrophus, born in the city of Megara” we salute you!  See – http://www.eupalinos-tunnel.gr/ 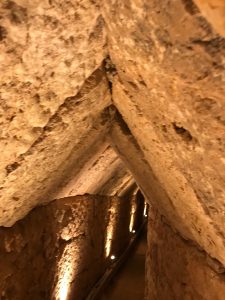 Vathi (Samos Town) is a bustling, clean and bright capital with both wide boulevards and narrow back streets, green parks, markets, marina, commercial port and Neo Classical buildings. We spent a full day happily exploring the town and its traditional fishermen’s tavernas but failed to locate the archaic shrines set high in the surrounding wooded cliffs.

Plataea Pythagoras is dominated by a copy of the Lion of Chaeronaea, dedicated in 1921 to the heroes of the Hellenic War of Independence. 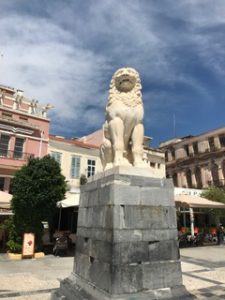 The Archaeological Museum is divided between two buildings. One is dedicated to the truly magnificent Colossal Kouros and Geneleos Group (mother, father and four children 560BC) of the Heraion. The second building is dedicated to variety of Heraion votives from as far afield as Iran, Egypt, Armenia, Assyria, Cyprus, Babylon and the Greek world itself. A true testament to the importance of the Heraion Sanctuary. Displayed are ceramics, bronze, gold, silver and ivory goods, weaponry, griffins, furniture, jewellery, coins and glass. Most unique however are remnants of wooden objects – a door, a tabula, statuettes including Hera, one horse and one ship. My favourite? A Laconian ivory comb with narrow teeth and  ivory votive poppy heads which conjures up rather unromantic images of ‘stoned’ Spartans removing nits from their hair before going into battle! 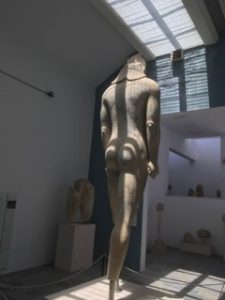 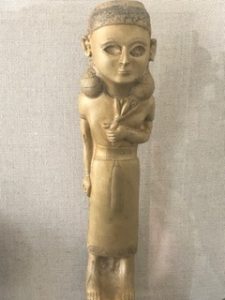 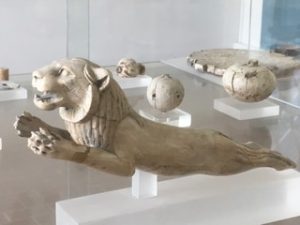 Other Samian highlights are the Cave of Pythagoras (too difficult for us), Folklore Museums, Palaeontology Museum (with three toed, 13 million year old horse fossil), Byzantine Museum, Wine Museum and vineyards in which to taste the famous sweet Samian wine still distilled with honey.

Any drive will invariably take you to picturesque mountain villages, traditional houses, springs and waterfalls. The highest village of Potami has spectacular views, a tiny Plataea, C16th Spring and outdoor village laundry with cistern and furnace still in use until the 1950’s.

If you are looking for a short break with plenty of history, nature and easily accessible archaeology, do consider Samos. Even Ephesus is only a short boat ride away!

Our thanks must go especially to the Kerkis Bay Hotel in Ormos. Rarely do we eat in one establishment, let alone a Hotel! However, they offered superb home cooked fare, a fabulous waterfront view and wonderful hospitality.

Unable to find any evidence of the original Spartan colonists, we were gifted a selection of marble, limestone and granite from the foundations of Ormos itself and the local villages of Marathokambos and Ambelos. Far too heavy for the return journey, ‘take away’ pieces were chiselled off and now nestle against the olive tree on our patio. 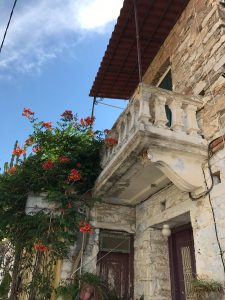