Santorini – such a small island, but so much to see….

Home » Latest Blogs » Recent News » Santorini – such a small island, but so much to see…. 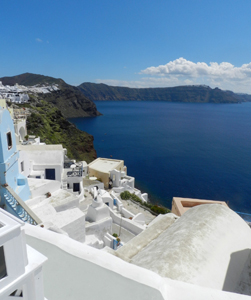 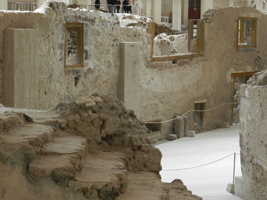 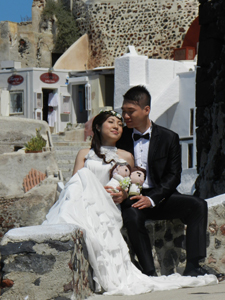 Admittedly difficult to access in low season (direct flights don’t begin until late March) but on arrival distances are short; one can traverse the island in ninety minutes and a single hotel will suffice.

If time is not an issue, approach by ferry from Piraeus (Crete connections don’t begin until high season) and wonder at the high caldera walls whilst skirting Therassia and Nea Kamini (the little burnt one) – a new volcano slowly emerging from the sea. If time is tight, be prepared to endure the small and chaotic airport; we were delayed by an hour on both departure and arrival whilst officials scurried around desperately trying to locate the lone Passport Control Officer! Children, as ever in Greece, were given preferential treatment and allowed to queue jump. ‘Unaccompanied’ adults were left to stand and grumble!

The catastrophic volcanic eruptions of aeons past (those which destroyed Minoan Crete, stunted crop growth in Ireland and left ash deposits as far away as Iceland) remain frighteningly (although beautifully) evident – and not just at ancient Thera. 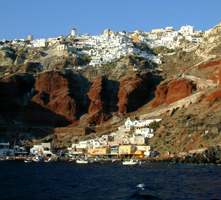 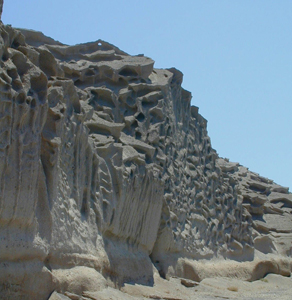 The famous black volcanic sand beaches at first appear merely a curiosity, until you gaze up at the seemingly fragile, wind eroded, multi layered, lava flow cliffs. The beauty of the caldera (especially at sunset) takes on a (literally!) harder edge in realisation at the magnitude of the explosion which created it. The resultant tsunami reached Crete and beyond. No human remains have been unearthed.

For a closer look at current volcanic activity take one of the many sailing trips into the centre of the caldera. Those from Fira (full or half day) are probably the most fun because of the steep access to the harbour either by funicular, donkey or intense aerobic work out. A choice of catamaran, motor cruiser or sailing ship will take you to fumaroles, hot springs, mud baths and provide an opportunity to swim in thermal currents of 35 degrees Celsius. 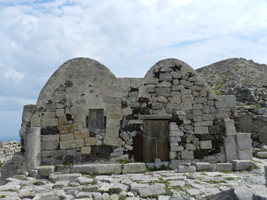 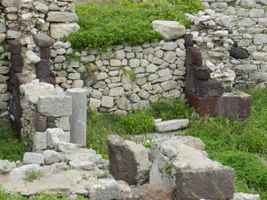 The two open archaeological sites of Akrotiri and Thera do not impress in the way of the towering remains of say, the Athenian Akropolis or Roman Colosseo. The effect of Akrotiri is far more subtle. Thera impresses because of its topography. A third excavation is currently in progress but public access will be years hence. 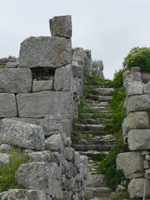 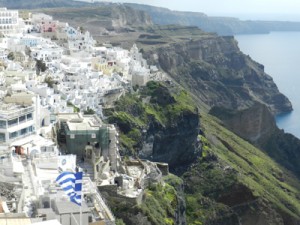 Ancient Thera, the ‘Greek Pompeii’ is a city slowly emerging from a tomb of volcanic ash. Encased in a giant warehouse (inspirational construction for budding engineering students) it allows the visitor to wonder at the ancient terror amid evacuation. Wander along paved streets lined by listing half timbered housing and collapsed staircases. Peer through walls wrenched apart to view bath tubs, plumbing remnants, furniture, pottery, ovens……stroll to the nearby beach and imagine the three foot thick floating bed of pumice – perhaps Plato’s Atlantean ‘sea of mud’?

Founded by Spartan colonists in the 9th Century BC, Thera is set on a 360m high ridge and can be reached either on foot by a steep shale path from black Perissa beach or steep, switchback partly metalled road by minibus or donkey from Kamari seaside resort. Constructed entirely of limestone the site consists of a variety of sanctuaries, housing, public buildings, altars, theatre and narrow streets. Occupation lasted into the Byzantine era and thus there is also a church and interestingly, an Egyptian sanctuary for the Ptolomeic mercenaries of the Roman era. Commanding in its position, the views are breathtaking – as was the determination (and endurance) of the original occupants! 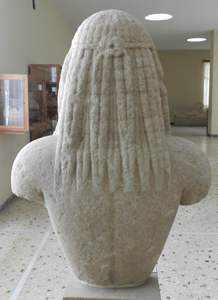 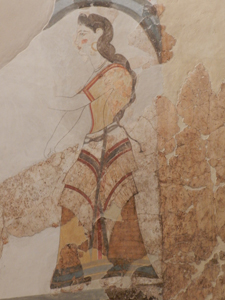 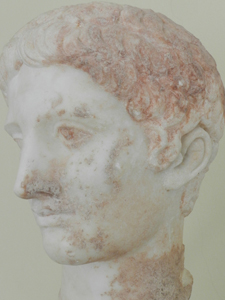 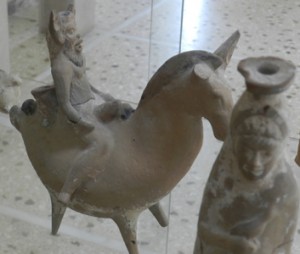 Museums abound. The Archaeological Museum of Thera houses an excellent collection ranging from Kouroi to trireme decorated Attic Kylikes. The Prehistoric Museum of Thera boasts a wonderful display of frescoes, gold jewellery, Minoan and Cycladic pottery. The Santozeum also in Thera projects 3D reproductions (by Kodak Pathe) of the Frescos uncovered by Marinatos. Other museums around the island are dedicated to Costumes and Folk Lore, wine, Icons, musical instruments, minerals, fossils and maritime.

Two of the most unusual (or unexpected) are

i – the Bagpipe Museum in Akrotiri’s La Ponta (Venetian Castle) – with demonstrations, recitals and workshops.
ii – the Tomato Industrial Museum at Vlychada Beach – with original processing machinery, tools and documentations, aural history, local arts and crafts. (Be sure to spot the Hellenistic Rock Tombs at Elefsina on approach) 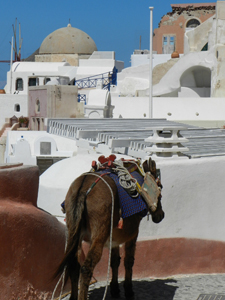 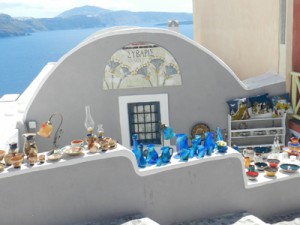 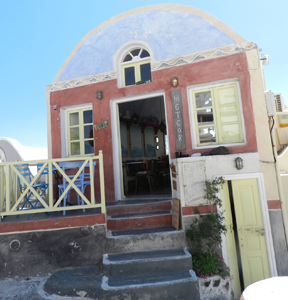 Make sure you visit Oia, even for half a day! Touristy it may be (and undoubted hell in August) but it is beautiful. Park on the main road, head towards the caldera edge and simply get lost amongst the warren of steep narrow lanes winding amongst blue roofed, white washed cubic dwellings – and the multitude of doll like Chinese brides in Cinderella tulle being photographed by adoring grooms and attendant families. Take a picnic – prices are exorbitant! 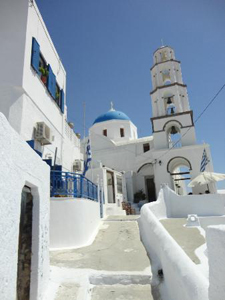 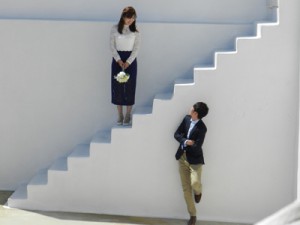 Other traditional villages are equally worth exploration. Messaria is known for its stately homes. Megalochori for its traditional houses, high walls and inner courtyards, shady plataea and tavernas. Pyrgos for its panoramic views, kastelli, winding pathways, white painted houses, Neo Classical mansions – and the tiny cave like Penelope’s Ouzeri adorned with family photographs and antique advertising plaques, nestling beneath one of the many churches. Imerovigli, the highest village on the caldera sits close to Epano Kastro, the original Venetian Capital, Skaros – a fantastic hike.

Meals there were aplenty; three stand out for both hospitality and cuisine. Mousiko Kouti in Megalachori provided a range of pan Hellenic delicacies. Family run Taverna ‘ROZA’ at Vourvoulos (Oia lower road) was a delight. 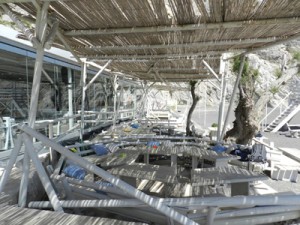 Demilmar actually on Perissa black beach made for a very refreshing lunch stop.

We stayed in the quiet village of Akrotiri; sufficient tavernas, two mini markets, caldera views, close to beach, light house and main sites, yet far enough away from the crowds to give us quiet evenings and a decent night’s sleep.

Flora, Giorgos and their parents offered us wonderful hospitality at the Kalimera Hotel, Akrotiri – small, traditional Cycladic, great setting. Cousin Giorgos and his family in the nearby, rather swish Paradise Hotel were equally welcoming – a glorious spot, especially with a glass of 35year old Vinsanto!

Thanks also to Alma Tours, Crete and Kafeiris Tours, Firostefani for helping everything run so smoothly.