What did the Romans (and Etruscans) ever do for Firenze? Part II

Home » Latest Blogs » Featured Tours » What did the Romans (and Etruscans) ever do for Firenze? Part II

Before embarking upon Etruscan Day (or half day) Excursions – do visit the Florence Archaeological Museum. The novel experience of entering a Florentine Museum with out queuing is unparallel; the exhibits are a revelation. 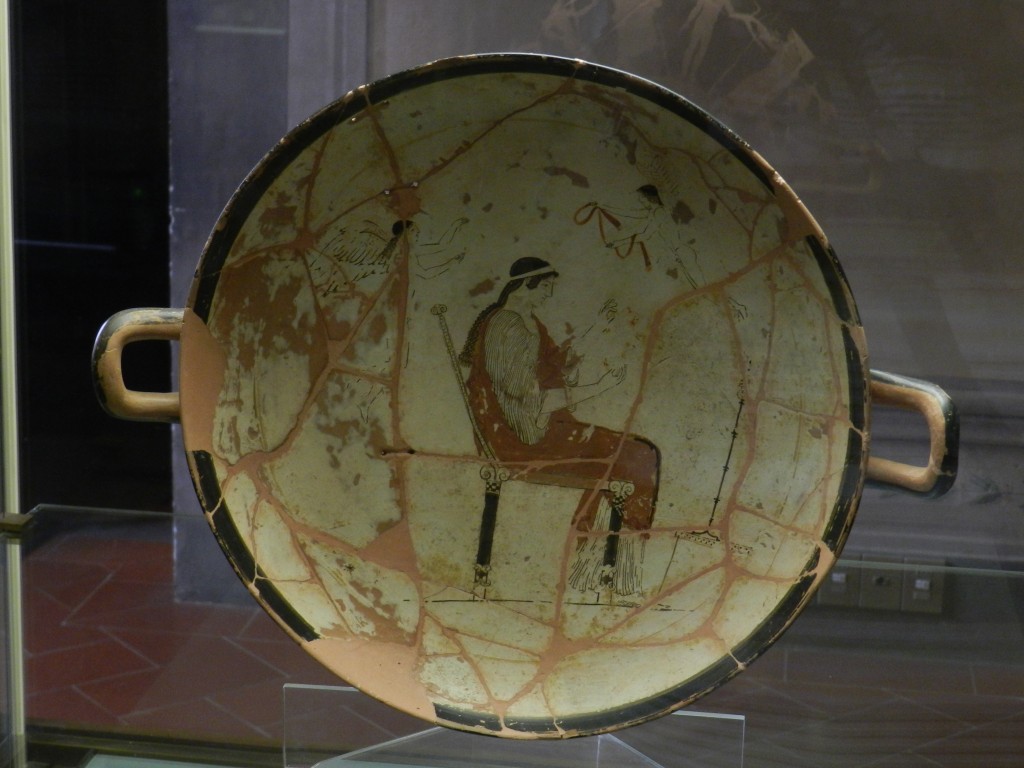 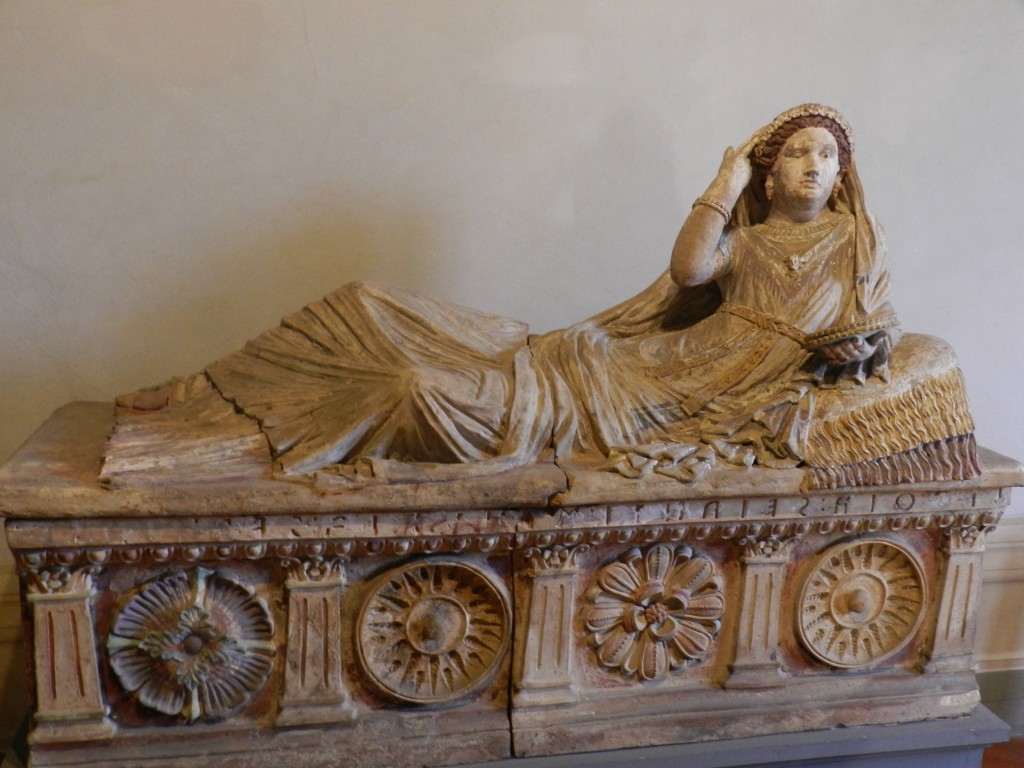 The Chimera of Arezzo and the François Krater are the most lauded but are supplemented by sarcophagae, Greek and Roman Bronzes, Etruscan armour, a chariot and other burial goods, Attic kylikes (including Little Master Cups), marble Kouroi and marble copies of original Greek bronzes. Although some rooms were off limits because of staff shortages, those on duty didn’t hesitate to move barriers and switch on lights when asked. 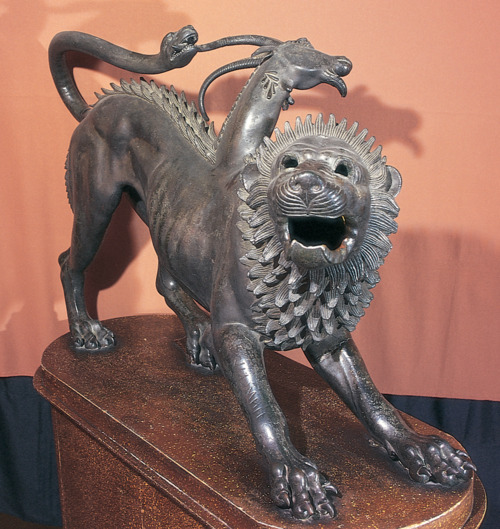 Thank you Cosimo I and Cardinal Leopoldo for acquiring the bulk of this collection!

Should time limits prevent an excursion to outlying sites; the archaeological garden of the Museum boasts a collection of reproduction tumulus, chamber and dado style Etruscan Tombs. Unfortunately, the garden is only open on Saturday mornings; and only then if it’s not raining! 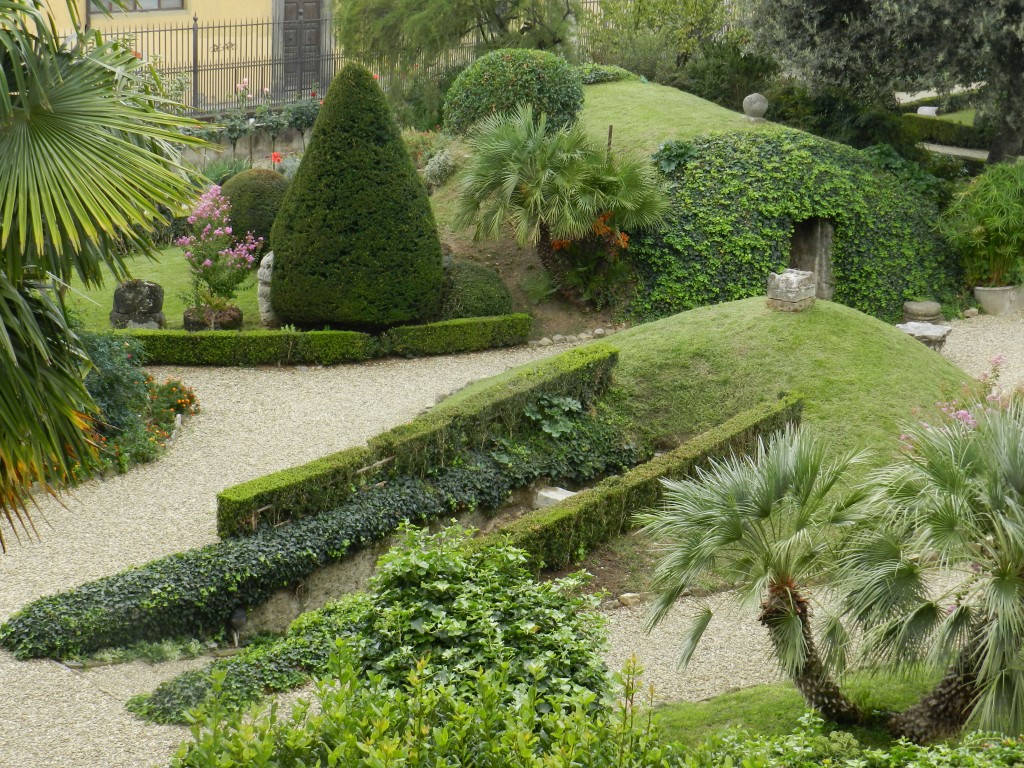 The hill top Etruscan Sites of Fiesole, Volterra and the Carmignano are all easily accessible from Florence; individually in half a day or combined for a full day excursion.

Near the pretty hamlet of Comeana (45mins transfer) are several Etruscan Tombs of which the Tholos at Montefortini, is the most impressive. The rectangular Tomb of Boschetti and the Necropolis of Pietramarina are within a short distance. The Archaeological Museum of Artimino (another mediaeval hamlet) houses a vast display of Etruscan funerary goods; everyday items from nearby settlements, tumuli and necropoli (including that of Prato Rosello), Archaic funerary sculpture and the Grumaggio Symposium. Also on offer are a variety of didactic activities for students. The area offers a wealth of fabulous archaeology in beautiful countryside and warrants a full day visit. 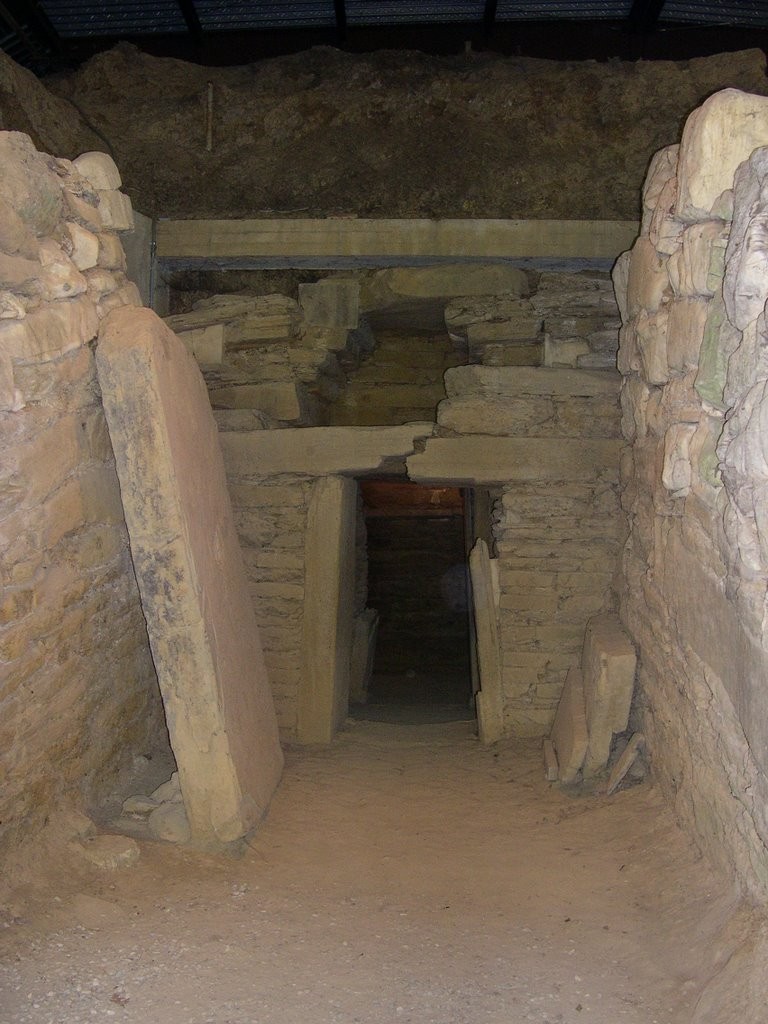 Another hilltop town is Fiesole (originally Faesulae), 25mins by line 7 bus (every 30mins) from central Florence and thus more given over to tourism. Originally Etruscan, the town was taken over by the Romans in 90BC and subsequently destroyed for supporting Catiline whose rebel forces were defeated near Pistoia in 63BC. The Museum, Site, defensive walls (with impressive Etruscan section) and Tombs on Via Bargello are all within very easy walking distance from the central square. Reasonably priced cafes offering traditional local fare (but also spaghetti and pizzas) surround the square and the Tourist Information Office close to the Site entrance offers very good free maps and walking trail advice.

We spent longer in the Museum (just inside the site entrance) than on the site itself because of the enormous display of excellent Etruscan sarcophagae and sculpture (including a very accommodating ram at a symposium), grave goods, Greek ceramics (Corinthian, Attic Red and Black figure), Roman sculpture and Lombard graves complete with skeletons and glass vessels – probably looted from Roman Graves!

A 30min walk took us outside the site to look at the defensive walls (the bus stop ‘Le Mura’ indicating the Etruscan section for anyone in doubt!), up several steep sets of steps before turning down past the Synagogue to the Etruscan Tombs.

A half day will suffice for Fiesole.

The far more attractive fortified hill town of Volterra (Etruscan Velathri, Roman Volaterrae; 90mins transfer) could also be ‘done’ as a half day excursion, but as it has so much to offer a full day would do it more justice. It would also be a splendid stop over for those travelling down south from Pisa and Florence. 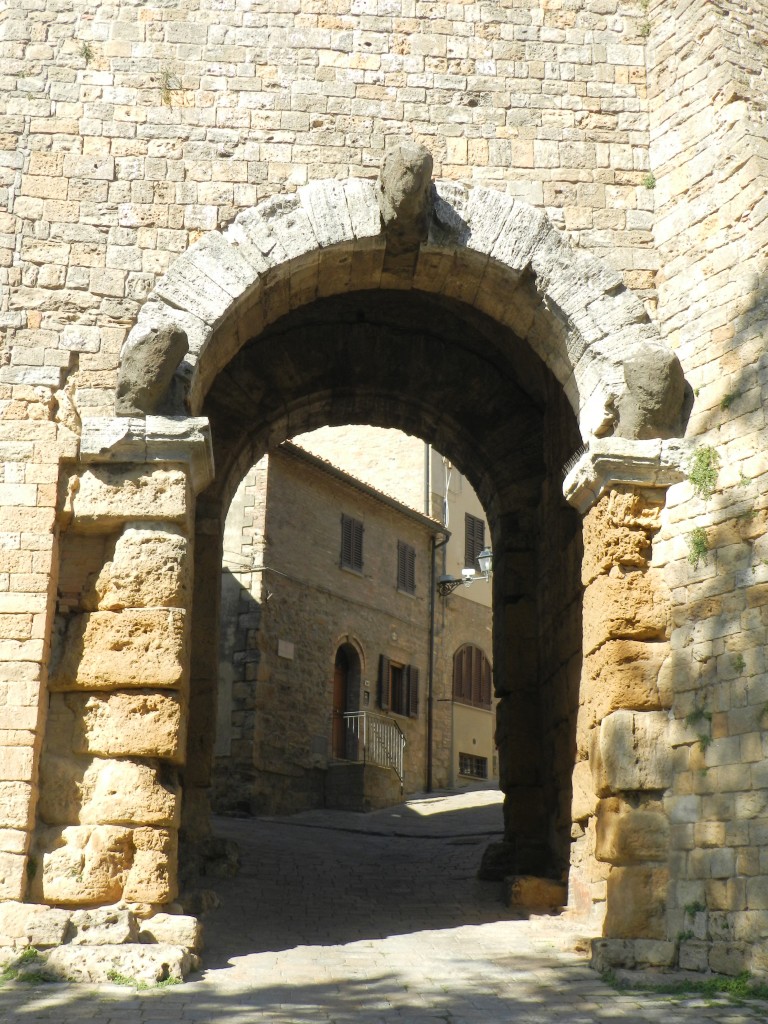 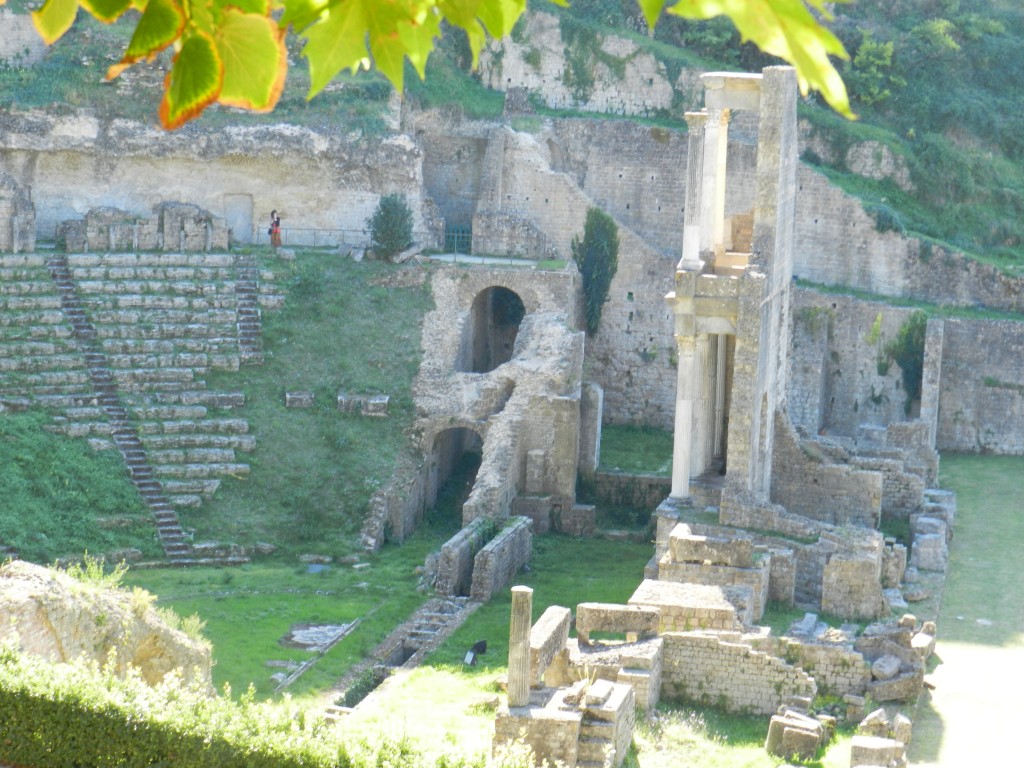 As leader of the Etruscan Confederation they faced defeat by Scipio in 298 BC and were reduced by Sulla in 80BC after a two year siege. The walls (rebuilt C13th, Etruscan remains near Arco Felice with mediaeval ‘font’) are certainly impressive!

The Etruscan Guarnacci Museum offers even more stupendous funerary sculpture and grave goods, the Etruscan Neckropolis occupies a commanding spot above the town within a landscaped park (+ foundations of two Etruscan temples, Hellenistic housing and cisterns), Porta all’Arco is the remaining Etruscan Monumental Gateway and Porta Romana probably served as the entrance to the C4th modified Roman Theatre and Thermae (no entrance, view from walkway, inclusive ticket with Archaeological Museum). 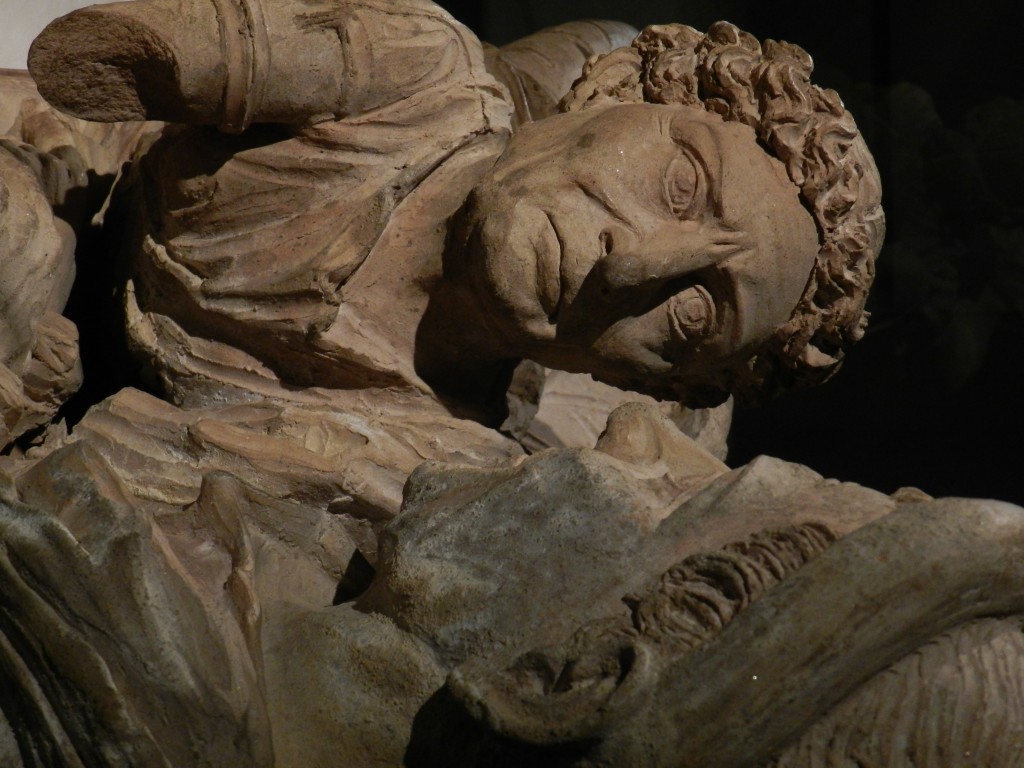 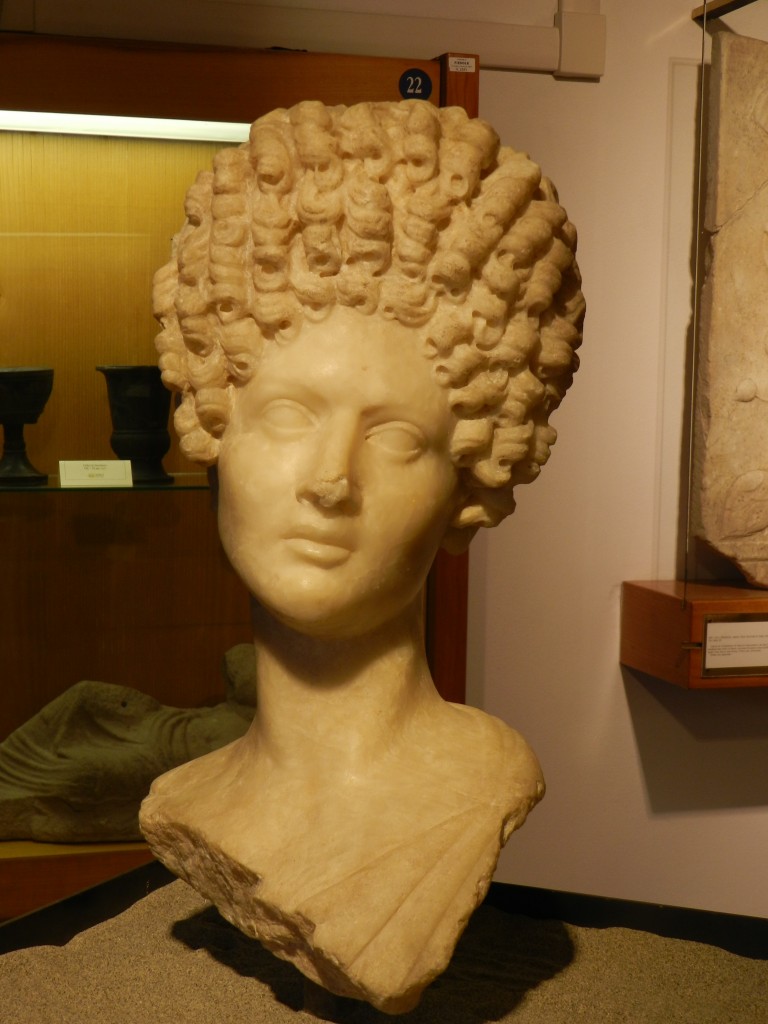 Home to the C1st satirist Persius and C3rd Urban Prefect Volusianus, it is also the setting of the Twilight Novel ‘New Moon’ – even though filming took place at Montepulciano! In addition to its ancient sites, Volterra offers a wealth of Renaissance and mediaeval architecture, an alabaster workshop and a Museum of Torture; after which you could take your pupils on an atmospheric walk through the narrow, cobbled streets at dusk…………

The famous and spectacular Inghirami Tomb remains within private ownership and special permission must be negotiated before gaining access thus prebooking is essential. 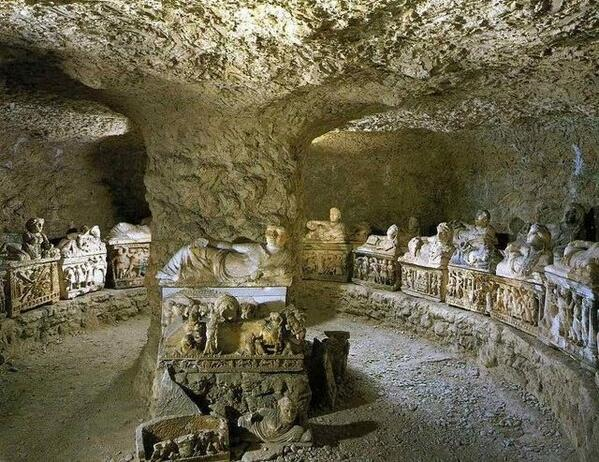 Before we left, we were lucky enough to see a display and march past by the historical group Sbandieratori and Balestieri in mediaeval costume, with crossbows, trumpets and flag throwers. A fitting end to a wonderful day – complete with wild boar for lunch!

Very many thanks to Maurizio, Gabriella and the incredibly hardworking Emanuela of Allegro Travel, Rome for all their assistance!