What did the Romans (and Etruscans) ever do for Firenze? Part 1

Home » Latest Blogs » Featured Tours » What did the Romans (and Etruscans) ever do for Firenze? Part 1

What did the Romans (and Etruscans) ever do for Firenze? Part I 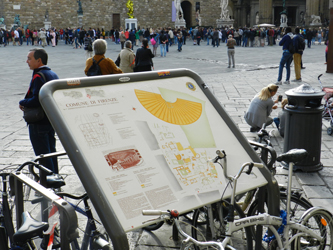 In the case of the Romans, provided solid foundations – literally!

Although there was originally a market place on the site now occupied by the Ponte Vecchio, the Etruscans wisely avoided the marshy, infested Arno Valley (as Hannibal, losing an eye and many of his troops, found to his cost!) preferring to settle on surrounding acropoli; more of which in Part II.

The Castrum of Julius Caesar was built in 59BC to defend the narrow ford and to provide a defensive resting spot on Via Cassia. It soon became Colonia Florentina; the marshes having been drained to satisfy an urgent need for Latifundia.

The Medici Monuments and statues may be pre-eminent – but Roman ghosts remain………….. 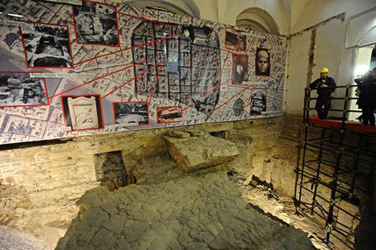 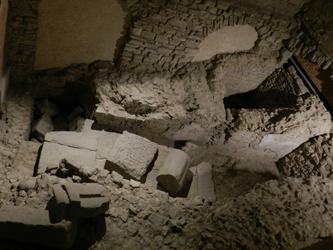 Continue down Via Roma towards the Arno (passing Mercato Nuovo) until the street suddenly veers to the right; you have reached the South Wall of the original castrum, outside of which were situated later Roman baths as indicated by Via delle Terme! The South Gate was situated at the junction of Via Vacchereccia and Via Calimala. 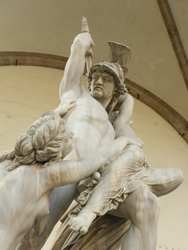 Into Piazza della Signoria (beneath which lie extensive Roman textile archaeology; no entrance – as yet!) and turn immediately left to view the map of the Roman City, bedecked with bicycle security chains. Walk diagonally across the Piazza to view in Loggia dei Lanzi examples of Roman Imperial sculpture set amongst those of the Renaissance. 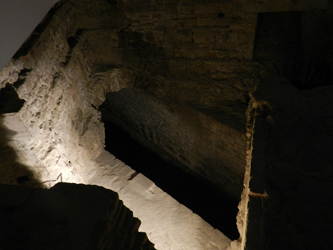 Palazzo Vecchio was partially constructed upon an 8-10,000 seater Imperial Theatre extending beneath Palazzo Gondi and the proskene beneath Via dei Leoni. Recently opened to the public, 15 minute Tours (prebooking, Italian only) take you past discarded amphorae, well shafts, vomitorium, Roman statuary and painted stone pavements (originally leading to the orchestra).

However, as the area is small, we dispensed with the tour, entered with the all inclusive Palazzo ticket, watched the videos and read the notice boards!

Departing the Palazzo we continued down Via dei Gondi; literally ‘down’ as the road is built above the cavea of the Roman theatre as the incline suggests! 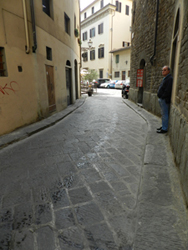 Heading onto Borgo dei Greci (towards Basilica di Santa Croce) we reached the junction with Via Bentacordi – so named as it traces the curve of the ancient amphitheatre. 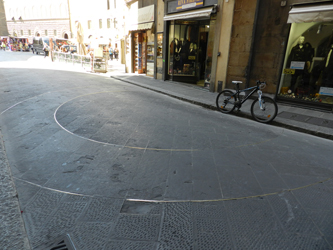 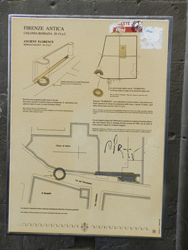 Retracing our steps to Piazza San Firenze (site of Temple of Isis) we continued up Via Proconsolo. Just before the Bargello is a large brass semicircle set into the road. This is the site of a Turris (Roman Watch Tower) with explanatory wall plaque nearby. 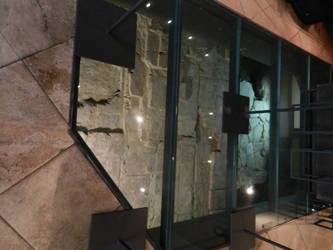 At the left hand junction with Via Dante Alighieri, the glass floor of an expensive boutique (A Piedi Nudi Nel Parco) reveals extensive Roman remains. Why display such beautiful Roman paving and cloth dyeing vats if the sales assistant unceremoniously ejects those interested, I wonder (not so) innocently?! Perhaps we should have bought a cocktail at their bar……….. 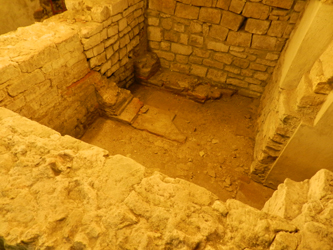 No cocktail purchases were necessary at Hotel Brunelleschi, a short walk away in tiny Piazza Sant’Elisabetta! On asking if we could view the museum a delightful (and delighted) manager summoned an equally delightful bell boy who led us through fire doors, past kitchens and down into the cellars. Amid the foundations of the Torre La Pagliazza, display cases of Roman artefacts and the The Renaissance Montelupo collection – lies a Roman Caldarium! “Do please send schools, but please let us know in advance. How refreshing to meet those not purely interested in the Renaissance. Do have a booklet on the excavations…….” enthused the Manager. 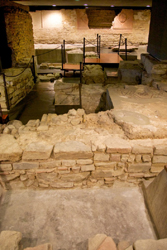 We continued north to Piazza del Duomo, originally another ancient Temple Site. The baptistery walls are decorated with marble cannibalised from ancient buildings and in the Crypt of Duomo of Santa Maria del Fiore (small entrance fee, but a peek is possible from the bookshop) one can view early Roman remains including domus and paving. Holograms, notice boards and a video (English and Italian) aid understanding.

The North Gate of the Castrum was situated where Via de’ Cerretanu crosses Via Roma (just opposite the Duomo on Piazza di San Giovanni). Turning left into Via de’ Tornabuoni we traced the West Walls, where at the crossing with Via degli Strozzi, once stood the West Gate. A 90 degree turn took us back into Via delle Terme – and we had walked the walls of Caesar’s Castrum!

Duration? All told, including subterranean detours – a very pleasant two hours. For schools on the Renaissance trail, it would make for a lovely after dinner (above ground) evening stroll.

We usually stay in the small, charming 3* Hotel Olimpia, centrally positioned in a Neo Classical Mansion high above Piazza della Repubblica. We did however pop in to thank them for looking after our schools. 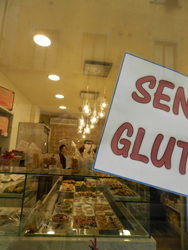 Eating out well and at a reasonable cost can be tricky in such an expensive city; more so if you have dietary restrictions. We were pleased to note several outlets catering not only for Vegetarians but also for Vegans and Gluten free – including gelato and pizza! About time too.

Towards the end of our trip (typical!) we chanced upon a smashing restaurant a mere 10 mins walk from the Hotel. ‘Le Carceri’, Piazza della Madonna della Neve, is set off the tourist track in a quiet piazza. Once a cloistered nunnery and more recently a prison, many architectural details remain. Excellent menu, reasonable prices, friendly staff, nearby University Bookshop, café and theatre.

Very many thanks to Maurizio, Gabriella and the incredibly hardworking Emanuela of Allegro Travel, Rome for all their assistance!